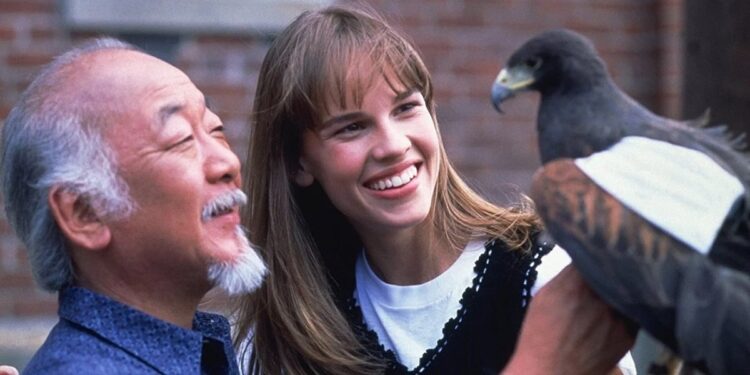 Plenty of people are divided on whether or not The Next Karate Kid is worth adding into the mix when it comes to the other movies since the only real link appears to be Mr. Miyagi, and Julie Pierce hasn’t been involved in Cobra Kai at all as of yet. But given the fact that the appearance of the young woman has been teased as of late, it almost feels as though there’s an obligation for a cameo at the very least since otherwise, it’s a very unfair tease that doesn’t serve much of a purpose, save to antagonize the fans. There’s already a hope that Mike Barnes, from the third movie, might be returning, as Terry Silver has made an appearance in the most recent season and made it clear that he’s not going away any time soon. But bringing in Julie as a wild card, someone who has a connection to the story in her own way might be kind of fun since it’s fair to think that being attached to Mr. Miyagi is a good enough reason to finally include her in this tale.  Here are five reasons why Julie needs to appear in Cobra Kai.

5. She could still be Tory’s mother.

The fans aren’t that divided in this belief since it’s easy to believe that this could still happen. Ali Mills isn’t Tory’s mother, that much has already been proven in the prior seasons. But there’s been no word of who Tory’s mother is, only that she requires constant care, which places a lot of stress on Tory. This does mean that Julie might not be up and mobile during the show if she does find herself added into the narrative, but it does explain, in a way, how Tory is so adept at martial arts when she makes her way into the story. This would be an odd way to bring her in since she wouldn’t be a lot of help, but it would still be fun to see her.

4. Daniel might need at least one more person to help fight Terry Silver.

It’s already been seen that Chozen has decided to help out to honor Mr. Miyagi’s memory and because he and Daniel are now at peace with each other. But if one thing is true, it’s that Terry Silver knows how to recruit some of the meanest and nastiest allies to do his dirty work. Bringing Julie into the mix, if she’s capable, would be interesting since it would unite one more useful ally with those that have decided to stand against someone that wasn’t so much re-introduced into the story, but was unleashed by Kreese in an ill-fated attempt to keep Cobra Kai on top.

3. Julie and Daniel do share a link with Mr. Miyagi.

While it’s not implied that they ever met, both Daniel and Julie were special to Mr. Miyagi since they came to him, or he came to them, during times in their life when they really needed someone. Even though Daniel has presented himself as kind of a jerk at times in the series, it’s fair to think that he’s trying to do the right thing in the name of his mentor. Julie could become a balancing point that might tip the scales back to a more favorable position that would honor their mentor’s principles and make it clear that revenge is not the only way to go.

2. She’s impartial and could bring a new perspective to the show.

One has to remember that Julie has no connection to Cobra Kai, and could therefore offer up a different way to look at things and perhaps even convince Daniel that a new line of attack that might give him a stronger advantage. And then again, this new line of attack could be something that would open Daniel up to the possibility of new ideas that would combat Silver and Cobra Kai without having to go at him directly or from another angle that’s meant to produce the same result. In other words, she could help show Daniel, and maybe even Johnny, how they didn’t need to fight Terry to defeat him.

Honestly, people have been wanting to see Julie since about the second season, and rumors and whispers have a way of growing since what isn’t seen is bound to get people talking about what they would like to see. Julie was the product of a spinoff movie that a lot of people didn’t think was worthy of inclusion since the overall story had already been told. But given that Mr. Miyagi is a big part of the story as well, it’s fair to think that any life he touches in a big way would be another source to tap into. So to be real, Julie does need to be given a part in Cobra Kai at some point.  One way or another she could be a positive influence.