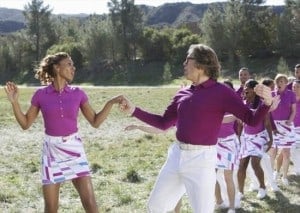 The Neighbors: The Musical

I know, I know — usually when we hear “musical episode” we all groan, “are they really doing that?”Â  But — in the case of The Neighbors, where everything is zany, nothing is normal, and anything goes — this episode totally worked.

The episode’s music, contributed by award-winning composer Alan Menken, lent itself to the Bird-Kersee’s desire to see a Broadway musical, and later stage something similar themselves.Â  After the aliens mimic Amber’s attempt at flattering her parents to get what they want, Debbie and Marty turn them down — they will not bring them to New York and that’s final.

But, much like Amber, again, the couple sneaks out of the neighborhood to attend the Broadway production of Annie, and return with music on the brain.Â  The pair decide that they must show the Weaver’s that they can handle the world, and the only way to do that?

Put on a musical.

Drafting help from Dick, they begin to hold auditions for the Zabvronians (set up to mimic The Voice, before breaking out into song for rehearsals.Â  With a tune similar to “Belle” (a la Beauty and the Beast) the entire alien company bursts into a musical tale of what they want to do outside of Hidden Hills including: using a public restroom, tap dancing at the DMV, getting tattoos, and smacking the entire cast of Glee.

The number even has a kick-line.

But as usual, nothing goes smoothly in an installment of The Neighbors, and Dick falls into a well as soon as the song is over.Â  After a frightening encounter with a reporter, with Marty concerned that the situation would turn into E.T., Larry and Jackie resign to stay at home and live vicariously through 3rd Rock from the Sun reruns, though Debbie and Marty take the opportunity to revise their previous refusal to escort the aliens outside of Hidden Hills.Â Â  They do want them to experience the world, but they worry, and want them to be safe.

As the aliens spent the episode singing, Amber was fighting for her right to attend a concert.Â  Despite the fact that she never misbehaves and got her work done, Debbie still refused to allow her to go.Â  So, Amber devises a plan — “what if we say no?” — to the things our parents tell us to do?Â  Of course, she ropes in Max and Abby and the three run amuck in the Weaver household.Â  Later, Debbie fights back, threatening the disappearance of Christmas, birthdays and food, getting the kids to cave.Â  However, Amber still doesn’t get to go to her concert, and inadvertently leaves Reggie waiting.

You see, Reggie, though he had been trying to write a song for his girlfriend Giselle, re-realized his love of Amber, and was determined to talk to her — and was left in the dark.

This episode really wasn’t about the music per se, though it worked for the story in the usual quirky way of The Neighbors.Â  The number was funny and entertaining, and very well done by Mr. Menken.Â  You’ve just got to give the cast a hand for being able to pull this insanity off.

As usual the episode also had an entertaining tag — Max trying to bike across the sky with Dick in the basket — an E.T. imitation.Â  The show is just plain funny, great one-liners and puns all around.

Great decision on ABC’s part to give the show time to grow.

The Neighbors airs Wednesday nights at 8:30 PM on ABC.