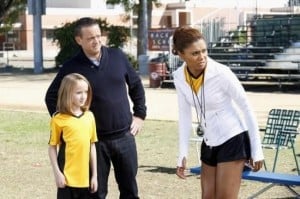 It’s parents’ night at the kids’ elementary school, and while the gym is full of booths and tables for various groups…Larry Bird is underwhelmed. Not surprising given his general condecending attitude towards humans. However, his attitude changes after the Weavers decide that they should volunteer for different things – Debbie wants to join the PTA and Marty wants to coach. So, the Zabvronian couple divides as well with Jackie going with Marty and Larry with Debbie. It helps that the PTA description of bickering and petty politics sounds a lot like Zabvronian council.

In the meeting, Debbie innocently suggests a diversion from the traditional brownie plan for the PTA bake-sale: gingerbread men dressed like soccer players – but gets shot down. Apparenty the suburbs have different standards, and the PTA president is adamant about the city ruining them. But this just doesn’t sit well with Larry, who incites a vote and devises a plan for he and Debbie to divide and conquer to round up enough votes.

And so they set out to convince the other PTA members, going to whatever lengths necessary to rally parents to their side. But things turn just a little more serious when they run into PTA president Linda on her walk, and discover that she’s so dedicated to the job that she has a tramp-stamp of “PREZ.”

Meanwhile, coaching the soccer team is not exactly going how Jackie had imagined it. Marty takes the coaching style of “everyone just have fun,” though it is obvious that it is Jackie’s own son, Dick, bringing the team down. She doesn’t like that Marty is essentially lying to Dick about his performance on the team. She goes to her husband with her concerns. You see, as a child Jackie suffered from a lack of self-esteem and athletics was what helped her. As a mother, she fears that Dick’s lack of sports aptitude will be detrimental to her future, and Larry advises that she should be fierce and do what she believes is best for her son.

So what does she do? After attempting to train Dick, and failing, she kicks him off of the team. But the boy takes it in stride, even agreeing with his mother that he’s a terrible player and the blunt yet precise lesson could motivate him to work harder. Continuing in her efforts to lead the soccer team to victory, Jackie turns the team against Marty as well.

Still determined to win the bake-sale war, Larry Bird dons a very mysterious black skin-suit while Reggie Jackson gets “in position” (I don’t know about you, but I had seen the promos for this new episode and wondering what the heck he was doing jumping around in the getup). So what exactly are they up to? Well, the instant Reggie pushes a gingerbread man into the house it becomes clear that Larry’s actually wearing a motion capture suit, and the cookie springs to life. Larry takes advantage of the technology to torment Linda so much so that she gives up the entire PTA the next day, dumping it all in Debbie’s lap. Apparently psychological warfare is the tactic of choice for Zabvronians.

Of course, neither Debbie or Marty want to admit that they are wrong, so Debbie ends up baking 200 gingerbread on her own (sort of with Larry’s help), and Marty finds himself rather lonely, until he finds Dick outside practicing soccer on his own and goes down to help.

Dick, ever mature and wise, admits that he knows he’s the worst athlete on the team, but wants to make his mother proud even though he doesn’t really need the confidence boost as she believes. So, Marty escorts the boy back to the field where his mother is apparently missing him, and has him put in the game.

The episode capped off, quite hilariously with Linda interrogating Debbie on how she made the gingerbread man come alive, only to then mistake Dick running towards her as said cookie.

This episode was cute. The show takes advantage of having characters with very distinct personality, which, in my opinion, allows for different jokes and complex relationships. Meaning, Debbie and Larry’s friendship is much different than she and Jackie’s, and so on and so forth. It also helps that Larry Bird is rather unpredictable aside from his distain for humans.

And honestly, I love Dick. He’s so awkward it’s cute yet also quite mature. He had some particularly good lines in this episode, including: “Once I learn some bullet-proof knock-knock jokes I’ll be the total package!”

Again, The Neighbors is not a show to be taken too seriously, and why should it be? It’s light and funny, and yeah…weird. But it’s entertaining.