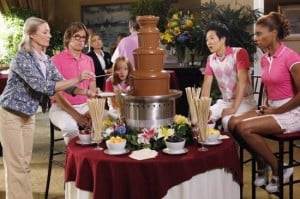 Last night’s episode of The Neighbors began as a comical look at aliens in a country club yet turned into a rather honest and touching commentary on race.

The Weavers’ discover in the opening moments of the episode that the Bird-Kersees have apparently been going through their mail, and have found an invitation for a new country club’s open house.Â  But they are not alone — the Zabvronian family received an invite as well — which of course, screams ‘disaster’ to the Weavers.Â  The family tries to quell the aliens’ excitement by describing how country clubs exploit different classes, discriminate even, and they really shouldn’t want to go.

The Weavers are able to translate human classes to Zabvronian “equality” standards, however, the aliens still don’t understand why race is such a big deal.

The two families part ways, more or less agreeing to stay away from the country club — until Marty tells Debbie that he wants to join.Â  Badly.Â  So the two concoct a plan to sneak out of their own home, to not tell the Bird-Kersees where they are going, and attend the open house.

Meanwhile at said alien home, Reggie has done some very superficial research on the differences between races, and basically distributes the appropriate stereotypes amongst himself, Jackie, Larry, and even Dick, who describes himself as “a pink.”Â  They take the ‘requirements’ of their various races to heart and seem to enjoy the idea of having a group to belong to outside the Zabvronian community, however the bubble is burst when they figure out that the Weavers have left the neighborhood.

Cut to the country club where Debbie and Marty (plus the kids, sans-Amber) have decided that they need to get into this club.Â  Everything looks great for them, until (as expected) the Bird-Kersees show up, having followed their scent.Â  Once again the Weavers try to put-off the family on the idea of the club, though to no avail this time — the Bird-Kersees know that something is up and seem determined to fit in better than their friends.

So how do they go about that?

The Bird-Kersees take the route of abusing the racial stereotypes that they have learned while the Weavers do all that they can to make themselves seem higher class.Â  Finally fed-up, Marty lets loose on Larry, tells him that they are not fitting in at all, they are not special as Larry had believed as the club invited everyone with a mailbox to the open house.Â  The moment is doubly upsetting for Marty, as not only does he “feel like [I] just beat a kid to death with a bag of puppies,” but the head of the club tells him that the Bird-Kersees were going to be invited to join the club — not the Weavers.

It’s all very upsetting for the Weavers who so badly wanted to be members, even though they come into the knowledge that the club is very forward-thinking and intentionally includes members who are more diverse than the average suburban family.Â  And of course, it doesn’t help that Larry insists on rubbing their membership in Marty’s face, even going so far as to try to trick him into using a guest pass so that he can take a picture.

This in turn upsets Debbie a great deal, pushing her to get in Larry’s face, threatening him that he better be telling the truth, before she reveals Marty’s sad past with being unaccepted by country club members.Â  The Weavers, content to build their own hot tub, try to reassure the Bird-Kersees to go back to the club, enjoy it even, but Debbie accidently lets it spill that they only got in because they really don’t fit in.

Surprisingly, the news angers Larry to the point that the Weavers and Jackie must race him to the club as he travels by golf cart.Â  Though, Larry is not angry because of how they got in — he is angry because it is how the Weavers did not.

He marches right up to the head of the club and ultimately tells him that if anything, the intent to diversify the club unfairly excludes deserving people like the Weavers.

Ultimately, none of them end up retaining membership with the country club, but the lesson on equality despite inequality rings through.

I really would like to applaud this episode of The Neighbors.Â  As we have seen in past episodes, the show takes a very honest and straightforward stance on a great many issues, and I enjoyed how they took the issue of race and discrimination and turned it into a very simple and true storyline:

Sometimes, trying hard to indiscriminate can actually lead to discrimination.

There was nothing complicated about how the story was presented and the true purpose of it wasn’t even clear until the very end.Â  And yet it worked.

This also includes Debbie’s moment with Dick during the credit roll.Â  Dick doesn’t know who he is (if he’s not “a pink”) and says he wants to be judged by who he is on the outside just like everybody else.Â  Not exactly the ideal lesson for children, and Debbie lovingly explains to him that we can’t change who we are on the outside, so who he is on the inside is especially important.

Even though Dick (being a Zabvronian) can actually change his outer appearance, the message was rather touching.

I would also like to note that ABC has been heavily promoting the critics’ change of heart on the show (well deserved for The Neighbors if you ask me).

What did you think of The Neighbors?

Here’s Why ‘Eraser: Reborn’ Will be a Dud
Comics Lists News Things You Didn't Know Whatever Happened To