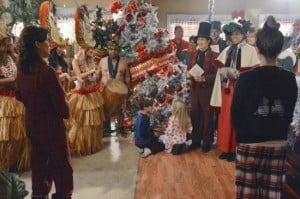 “Gather ‘round the tree, we’ll light the menorah and Kwanzaa ‘till the break of dawn!”

Sticking with the running holiday theme of episodes these days, tonight’s episode of The Neighbors celebrated Christmas…or…Crap-mas.

The episode brings us in on Christmas, with the Weaver children complaining about how much the day is going to suck and their parents encouraging them to stay positive and that they will make the best of the day.Â  But, as nothing in Hidden Hills is predictable — except for the fact that things are unpredictable — when the family walks downstairs, they find a room full of carolers, Hawaiian dancers, and a pig?

Flashback to four days earlier: Marty and Debbie wheel their Christmas haul of gifts up to the Bird-Kersees, hoping that they can stash the presents in the alien home.Â  Keeping with his negative attitude towards the humans, Larry Bird is not at all a fan of Christmas.Â  In fact, aside from touting the holiday as an “orgy of commercialism” he goes so far as to imply that there is absolutely nothing special about Abby Weaver, and only slightly more for the other two Weaver children.Â  When he calls the Weaver parents out on simply showering their children with useless gifts, they argue back the true meaning of Christmas before leaving their gifts.

But the joy of Christmas comes crashing down on Debbie and Marty when Amber demands her gift early — she knows exactly what it is — and Max and Abby decide to make last-minute changes to their wish lists.Â  After their children’s’ selfish displays, Debbie gets the idea that the thing to do is to return the gifts and take a family vacation.Â  The kids, however, are totally not into the idea.Â  Amber even turns the tables, suggesting that they got gifts for their parents to return: “don’t you see how that feels?”

Meanwhile, over at the Zabvronian household — the family is engrossed in the mystery of Christmas gifts.Â  So much so that Larry “accidentally” rips one open, and the wrapping paper starts to fly.Â  The Bird-Kersees quickly fall in love with Christmas, with the exception of Larry’s critical analysis of Santa’s ride and Dick’s declaration of Tiny Tim to be weird and un-relatable (an entertaining reflection of himself).Â  According to Larry, the best movie to watch is the Muppets Christmas Carol — he can totally get down with the Muppets.

The hitch in the Weavers’ plan comes when the leave to retrieve their gifts…and find the Zabvronians celebrating in the streets with said gifts.Â  Of course, the Weavers are furious, Amber, Max, and Abby even more so.

Jackie’s attempts to talk some sense into Larry about their mistake fall on dead ears, but surprisingly, it’s Abby who gets through to the senior alien.Â  Over tea, the little girl explains how she can tell that Larry is sad, instructs him not to be because Santa will make everything better.Â  She recounts for Larry a tale of her own sickness, which kept her from going to see the jolly Christmas icon, but even though she was sad, Santa replied to her letter, telling her not to forget what the holiday is all about — family.

The sweetness inspires Larry to realize that he’s been “very very naughty.”

Larry dresses Dick up as an elf and begins his quest to save the Weavers’ Christmas. The two buy a car, go to a strip club and ask a dancer if she has plans for the holiday, chase pigs, and even steal the tree from the car dealership.Â  All seemingly meaningless efforts…if you missed the first two minutes of the episode.

We cut back to the opening of the episode in its entirety, except now the scene in the Weaver’s living room makes sense.Â  As Jackie explains, the Zabvronians are all very sorry, knew that they wanted the perfect Christmas and to go to Hawaii — so they brought them both to them.

The scene is only complete when Larry walks in, in full Santa garb, with gifts.Â  The sight even brings a smile to Amber’s normally sour face, striking a happy note for Debbie.Â  Abby, adorably whispers to Santa-slash-Larry that she knows who he is, though she only thought he was an alien.Â  Caught off-guard, Larry moves to correct her beliefs, but stops — and asks her not to tell anybody.

This episode of The Neighbors certainly had its funny moments: Larry’s impersonation of Kermit the Frog, his later excitement over Christmas, Dick’s always-entertaining disposition.Â  Most notably, the show became almost self-aware at one moment, in which Jackie apologetically asks if they can skip to the end part where everything is alright and they all learn from one another, all while sneaking glances directly into the camera — clearly poking fun at criticism of the show.Â  However, despite the comedic aspects, the show delivered a sweet holiday notion, of the importance of family, and giving to those we love.

The Neighbors airs Wednesdays at 8:30 PM on ABC.