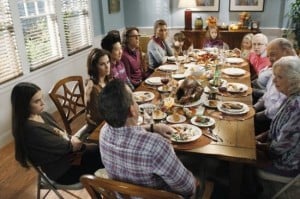 Tonight The Neighbors celebrated Thanksgiving a week early.  And in typical fashion, the holiday was definitely not “normal.”

To begin with, the Weavers are not looking forward to the festivities, in the traditional sense.  The couple is worried about hosting Marty’s parents for the day, not happy about the upcoming barrage of put-downs and tense family moments.  But things get even more complicated and confusing when they find out how depressed Jackie is at this time of year.  Apparently, so Larry says, she’s wandering a field as a form of therapy.  When they find her — I have to admit, I laughed — she’s marching with large plates on her feet….making crop circles.

In preparation for the big day, things in the Weaver house are tense.  Everyone is yelling at each other until Marty suggests rescinding the invitation to his parents.  The family decides that this is a brilliant idea, but unfortunately, Marty’s attempt to follow through crash and burn — his parents are still coming for Thanksgiving dinner.  On top of that, Debbie invites the Bird-Kersees for the meal when she learns that Jackie is depressed because Larry has exiled her sisters somewhere in the neighborhood.

And it seems that the Bird-Kersee boys are set on making the holiday a good one for their family.  The pair take a golfcart to a mysterious boarded-up house, and down into an underground tunnel where they demand for two guards to let them through to see their aunts.  Despite the fact that the two apparently tried to overthrow Larry Bird as leader of the Zabvronians, what do they do?  They invite their aunts to Thanksgiving dinner.

This is just a recipe for insanity, isn’t it?

Thanksgiving Day, Marty’s parents arrive as expected, closed off, not complementary to their new home, and generally unpleasant, ugly holiday sweaters in tow.  And then the Bird-Kersees arrive, followed by Jackie’s sisters, and the feuding begins.  No one is getting along, not even Abby and her sweater, and things in the house are basically….insane.  Marty’s father is refusing to compliment his son, his mother does nothing but belittle everything Debbie does, and none of the Zabvronians are getting along.

In the words of Dick, “Thanksgiving sucks.”

After Marty’s mother huffs off to wait in the car, the alien boys question Debbie on why she lets her mother-in-law get to her.  According to her, the holiday is nothing but a “feast of self-loating and gluttony with a side of shame.”  Unsatisfied with her response, Dick heads for Marty’s mother out in the car, and basically tells her that she shouldn’t be so hard on Debbie, she should “change the game.”

Back inside the house, all is quiet around the dinner table, until Marty’s mother comes back in, hesitantly complimenting Debbie on the fried turkey.  Her vague apology spurs Jackie’s sisters to apologize to Larry — they just didn’t think he was good enough for their baby sister — though Marty’s father is still hardheaded.

Standing outside, the families all say goodbye, and Larry, inspired from the apparent importance of family, releases his wife’s sisters from exile — though they’re still trying to kill him.  And in his own gruff way, Marty’s father apologizes for his behavior, even complimenting Marty’s tenacity and how nice the house is.

And even Dick gets a compliment from his brother for not giving up on the families.

There was nothing I disliked about this episode, nothing that wasn’t consistent with the already strange lore of The Neighbors.  Yes, the humor is cheesy, and just shy of ridiculous, but this episode of The Neighbors was funny.  It made me laugh out loud and I enjoyed the sentiment of the episode’s core point — family is important.

The Neighbors airs Wednesdays at 8:30 PM on ABC. 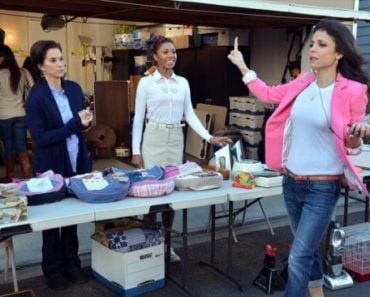 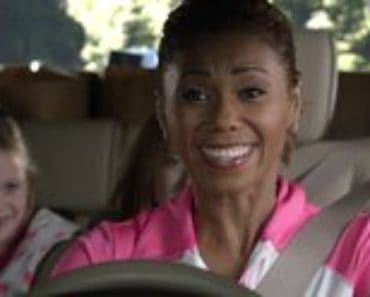 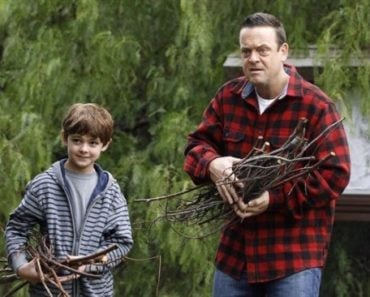