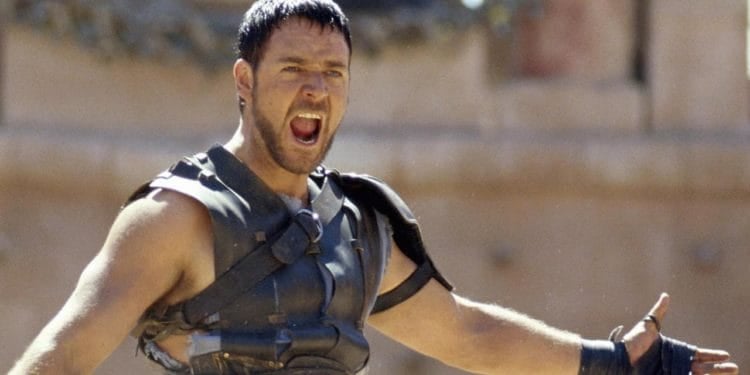 It’s amazing what can be done with a little bit of history and a lot of cinematic effect. Russell Crowe’s movies do this quite well and they prove to be highly entertaining, though when people go to research just what the past he’s acting out was really like they tend to deflate a bit when the history books tell the way it really was and don’t glamorize the legend. That’s perfectly okay to be honest, playing up legends and myths is something that humanity has done for centuries now as our stories have grown bigger and grander and taken on an epic scale that history can’t compete with. The idea of it all is to entertain people after all, not proclaim ourselves giants and epic heroes that never existed. This is where Crowe tends to shine since he is a strong presence and can bring to life some of the old legends and myths in a very pleasing manner.

Here are some of his most famous movies.

If folks don’t remember this one that’s not too surprising since it came out and subsequently disappeared due to lackluster reviews. It was one of the first times that a lot of people had even heard of Russell Crowe and to be honest it was one of his most psychotic roles ever. Sid was the amalgam of roughly 187 different serial killers taken throughout the history of humankind and placed into one lumped mass that was formed into a humanoid being. Imagine all those different intellects, desires, and dangerous inclinations fueling a single mind and you might understand just how dangerous he really was, but also how predictable.

This was based on a real story and despite the animosity towards Max Baer it’s been stated by Baer’s descendants that the film doesn’t portray him in the best light, stating that he wasn’t a bad guy the way the film shows. In all honesty they’re right, Baer’s not the bad guy and he’s not even a villain, he’s just another cocky fighter that didn’t think Braddock was worth his time. But if you’ll note at the end of the fight the two men actually touch gloves and Baer seems to congratulate Braddock, which could have been added in order to break the overall tension. Boxers aren’t exactly friends when they get in the ring with each other, but there is a possibility of mutual respect.

Sometimes the most intelligent minds can be the most troubled as occurs in this movie. While Nash is hard to deal with and has few social skills he’s also one of the most brilliant minds around and is able to decipher and crack codes that entire teams can’t do as efficiently given weeks and even months. That level of intelligence is hard to match since a lot of times it simply comes instinctively and isn’t taught. But the downside, sometimes, is that it comes at the price of any and all social graces since those that develop this kind of intelligence are all about proving their intelligence and haven’t cultivated the wisdom that’s needed to temper it.

Frank Lucas was no joke back in his day, he was a deadly man, but Richie Roberts was just a determined and just as ready to go to war when it came to getting drugs off the street and the drug dealers behind bars. Granted, this movie probably took a handful of liberties here and there to make the story work and it likely played up a few key moments in order to make people want to watch, but at the same time you’ve got to figure that back in the day a man like Lucas was the kind of guy you just didn’t cross, while a man like Roberts wasn’t trusted as much since he wasn’t on the take.

Yes, the era was fairly accurate in the movie since the Colosseum did in fact exist and it still stands today. But the story of Maximus is one that is likely cobbled together from many different tales and the opposition of the emperor and his grand death is fiction. For a fictional tale though this one had a lot of heart and a lot of power to it, forging a story that is as impressive as it was visually striking. If you break it down into its various components there will be things that don’t make as much sense, but if you simply take it as a great story then you’ll be entertained, and more than that, you’ll be impressed.

Russell Crowe has impressed a lot of people and drawn flak from others, but the one thing you can’t deny is that he does have his moments on screen when he’s simply great. You’re entertained, yes?