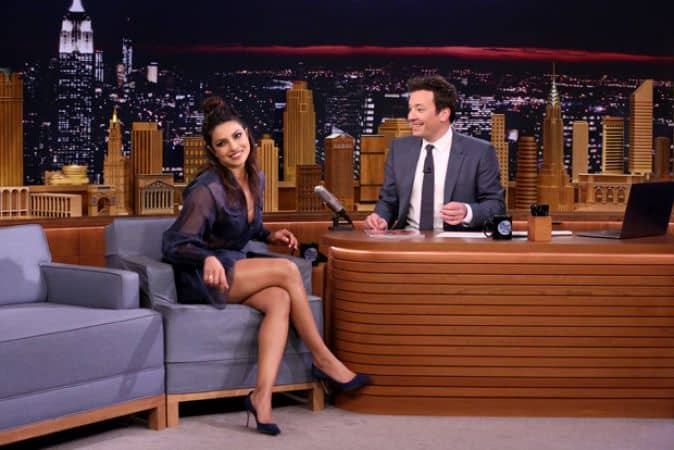 It’s likely that anyone who still doesn’t know who Priyanka Chopra is wouldn’t think that she was once upon a time a young girl without much, if any, self-esteem who considered herself to be an awkward individual that didn’t make friends that easily. Now she’s a very beautiful and confident individual that has risen quite a ways in show business, modeling, and has created the type of career that she might never have believed possible when she was younger. That goes to show that being hardworking and capable of doing what it takes is sometimes enough to get what you want in life and to obtain even more than you ever dream. In many ways her movie career has centered on her looks and has helped her to create a reputation for being the beautiful woman that can take on various roles and be at least somewhat plausible, but so far her career kind of speaks for itself.

Revenge carries a high price since it doesn’t ever seem to end. When Vijay sees his father hanged after being wrongfully accused he vows to go back one day and kill the man that killed his father. The only problem is that with an act of vengeance being the only way to move forward his life begins to take a violent turn as his mother and newborn sister eventually leave him to his dark and uncertain path, whereupon he rises in the eyes of those that he’s decided to follow and finally gets the chance to kill the man that took his father from him so long ago. In the end though he dies not long after gaining his vengeance.

Mary has the passion, the drive, and the skill to get in the ring with some of the best, but it also takes a good deal from her as she learns quickly during her time as a pro boxer. The first to step away from her is her father when he finds out she hid it from him, though when he finds out that she’s actually quite good at what she does he reconciles with her. Eventually though when she steps away to raise a family the people forget about her, and because of this Mary eventually gets back into the sport and continues to do her best as she fights for every inch in order to prove that she deserves to be there.

There are a lot of people that see models and figure that they must have a glamorous job, simply walking the runways and looking good all the time for a massive paycheck. The truth of it however is that they do have a fairly hard job since they have to maintain a certain shape, weight, and have to keep their lifestyle under wraps enough so as not to harm the agency that’s representing them. In short, they do seem to have all the glamour and they do get a lot of attention, but behind the scenes there’s a lot going on that the rest of us don’t get to see and some of us might not want to know about.

The power of love in a story such as this is a complicated and rather dangerous thing it seems like since it can happen at any given time, even when a man and woman are already married, creating an unwanted complication that neither of them seemed to foresee. That being the case though he does end up taking the woman he meets later on as a second wife, which angers many and ends up causing his first wife nothing but grief since the son they share grows up hating the woman that split up his father and mother’s perfect marriage. In terms of a love story it’s quite interesting as well as tragic.

Priyanka seems to have an affinity for love stories since this is the tale of a young man named Barfi that is kind of a troublemaker but when given the chance to do something right does manage to rescue Jhilmil from a kidnapping and then proceeds to take care of her. When he seems to fall in love with another woman though Jhilmil is heartbroken and disappears, only to apparently perish in another kidnapping attempting. A while later though Jhilmil shows up again and she and Barfi reunite to be together up until Barfi’s passing, which is narrated by the woman that he left to be with Jhilmil. It’s a touching story really.

Obviously she’s found her confidence throughout the years and has made it plain that she’s no longer the shy young woman she used to be. Her fame has been steadily growing and seems poised to become even greater as the years keep rolling on.