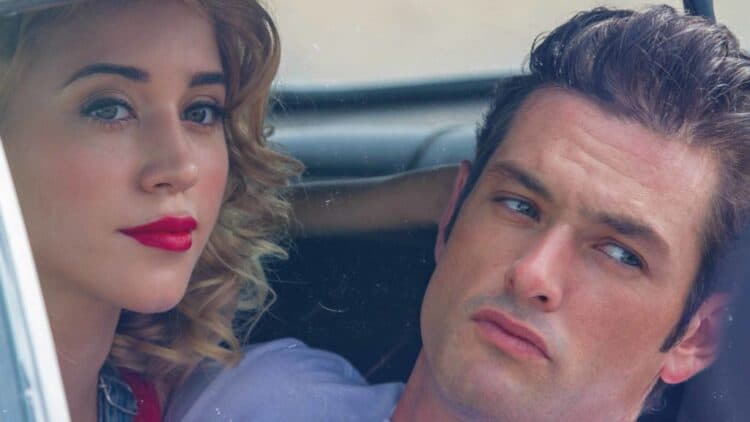 This tale of horror is at the center of Frank and Penelope, a couple who find themselves far away from civilization while traveling along a deserted road. Of course, that means trouble is along the way, but from the couple themselves. After Frank and Penelope rob a diner, the family, a group of psychopaths lead by a cannibalistic Bible thumper come after the two troublemakers. Can Frank and Penelope escape alive? This crime thriller stars Sean Patrick Flanery, Kevin Dillon, and Lin Shaye. Frank & Penelope is set to be released on June 3, 2022; Check out the top five moments from the released trailer.

Frank Beats Up A Guy

The trailer for this indie feature instantly gets right into the weeds of this story, which appears to be Frank leaving his old life behind for his new beau. There seem to be elements of True Romance and Bonnie & Clyde in Frank & Penelope, and this opening scene backs up that notion a bit. Why is Frank leaving his wife behind? Exactly what has gotten him to the point of changing the status quo? How did Frank and Penelope meet? Hopefully, the feature allows the audience to understand these characters first before simply diving into its devilish premise. Frank & Penelope has an interesting story; however, a story is only good when you have relatable characters. At the very least, we have to understand why Frank is leaving his humdrum wife for a stripper. The opening provides some brief fun and gives hope that it could be a great feature.

At this point, it’s been established that Frank and Penelope are looking to escape the world that they came from. The Sheriff gives us an exposition dump that explains trouble is brewing within the desert; however, the image of a scared woman speaks a thousand words. This could mean so much and that’s what makes it such a compelling moment. Granted, the trailer makes the mistake showcasing this woman moments later happily praying with the family, but there’s still some lingering questions. Who is she? Could she be a prisoner within the motel walls? Has she been forced to join some mysterious cult? Is she being punished for her sins? The religious element makes this aspect stand out even more. It’s not exactly clear what Frank & Penelope is about, though it’s easy to see that it isn’t another Bonnie & Clyde, which will hopefully result in a couple of fun and twisted surprises.

Once again, the religion aspect is highlighted here. It appears that Frank and Penelope have stumbled upon a religious cult, Chisos being the leader. Diving into the world of religion is a tricky place that could either result in a great film, or a misguided mess. There’s no telling what this movie will be. In some ways, it does come across as a misguided mess, but there’s moments that make it seem like Frank & People will turn out to be great. This also showcases why the opening is pretty solid. Frank is a troublemaker. Penelope is a stripper. These two are the perfect juxtaposition on a religious lifestyle and how the filmmaker tackle this narrative should be very interesting. Hopefully, Chisos isn’t a stereotypical and one-dimensional cult leader as it’s just as important to give him multiple layers that make him a compelling antagonist for our two anti-heroes.

The Sheriff Helps Out A Woman

This scene actually falls under the trailer shows too much moniker. Earlier, it appeared the Sheriff knew what was going in that desert; however, this scene provides more context on his character. The woman being harassed, only to be in on the scheme would’ve been a great surprise had it not been shown in the trailer. It takes away the suspense of that particular scene, but it’s also possible that the filmmakers are pulling a wool over audience’s eyes. Nevertheless, what’s the point of the entire rouse? Will the woman force the Sheriff do something or else? Or will she just put a bullet in his head? Though the editors shouldn’t have put this in the trailer, it still creates an intriguing scenario.

After trials and tribulations showcased under the rule of Chisos, this is Frank’s attempt to get out of this hell hole for good. The problem? Chisos is literally standing in his way. Does he have the heart to mow down the psychotic cult leader? This type of scene is nothing new, but the attempted escape from the protagonist should making for a fun and wild ride of this independent feature. Even more, will there be consequences for Frank’s actions? Frank & Penelope may not be the greatest trailer on the planet, but hopefully this turns out to be one of the sleeper hits of 2022.