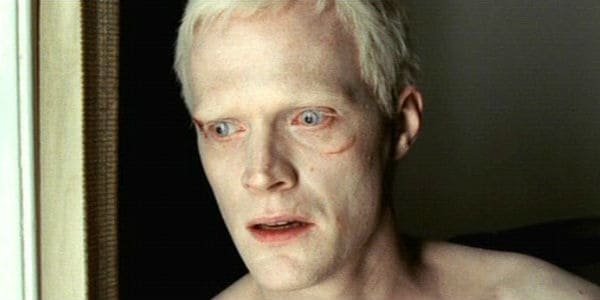 The idea of an albino individual in society is that they are kind of an oddity since their skin pigmentation is kind of strange to a lot of people since it’s not seen that often and it does make them stand out. But in terms of being used in movies and TV, such individuals are usually given pretty normal roles and are worked into the script in some way. It’s true that they do manage to get made fun of quite often since some people don’t know how to react around them, which the movies show, but the truth is that they’re not as odd as people make them out to be even if it’s a thought that they might not be as comfortable in the sun as others. This much is true, but a certain number of those with albinism might have problems with their vision as well, though nothing else is really affected by this genetic mutation since albinism doesn’t affect how a person develops as a human being, other than the psychological issues that might arise from being teased too much.

Here are a few movies that have used albinos in one way or another.

To be fair, this appears to be the natural appearance of Prince Nuada and his people, but to the rest of the world, it is a bit odd since the utter lack of pigmentation in the prince and his people is kind of off-putting. But worse than that is the fact that Nuada has a serious disdain for all humanity no matter if they’re harmful to his people, or even know about them, in the first place. The prince made it pretty clear in the movie that he was out to exterminate humanity in any way he could and gaining the crown that would allow him to control the Golden Army was the way to do it.

This guy was a flat-out jerk even if he was an honest cop. The fact that he was made fun of by Melissa McCarthy’s character felt somewhat justified even if it was a bit of a cheap and very easy shot. The fact that the guy didn’t know his partner was dirty was even worst than his attitude though considering that one has to wonder how a detective would work with someone for so long and not know that they had a criminal enterprise going. It does appear that maybe he wasn’t too aware of anything since he couldn’t tell that his partner was doing something illegal. But then again, honest doesn’t always mean intelligent.

3. The Albino – The Princess Bride

This guy wasn’t much as far as villains go, apart from the fact that he kept Wesley alive so that he could be continually tortured. Other than that, he was pretty creepy and was one of those characters that no one would cry over when he was finally taken out. But being that this movie was supposed to be a little more upbeat than that despite having a couple of fairly dark moments, it’s not hard to see why he’d be a ‘there and gone’ type of character give that there were more vicious villains to think about, such as the prince. But the idea of torturing a man and keeping him alive to continue torturing him, yikes.

2. The Twins – The Matrix Reloaded

This might feel like cheating just a bit but then again, one can honestly say that they didn’t see a lot of albinos in the Matrix since it might be that the machines took that one in thousands thing seriously and didn’t code any more albinos than they needed. Plus, the twins were different than the humans that had been integrated into the machines, as they were essentially rogue programs that were under the control of another. It would be great to see them come back in the upcoming sequel, but the likelihood of that feels pretty low since there’s no telling just who is going to make the cut as the villain, and these guys are henchmen level.

This guy, I mean whoa. A religious fanatic that is guided by The Teacher, this is a guy that will kill anyone that happens to get in the way during one of his missions, and on top of it all, he’ll actually punish himself in a kind of gruesome way as he whips himself for his sins. This is the type of character that can’t be reasoned with and is bound to follow whatever orders he’s given to the letter since he’s been taught to obey and to follow whatever mandates he’s been given without question. That’s a scary type of obedience since it lets go of free will as though it’s little more than air.

Albinos are just as different as anyone else, in real life or the movies.