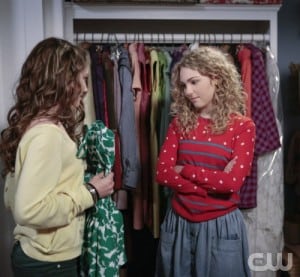 Long before stomping around Manhattan in her signature Manolo Blahniks, cigarette in hand and curly hair wild and untamed, Carrie Bradshaw was a shy girl from Connecticut looking to find herself in a world she felt she didn’t belong in. The now-iconic television character and trendsetting fashionista wasn’t always the one with the polished look and the messy social life, but we only got the occasional glimpse or offhand remark about her family life during the run of Sex and the City, as most of the action centered on her romantic life and her makeshift family of close friends. Based on the best-selling novel of the same name, the first episode of The Carrie Diaries finds the ultimate City girl experiencing her first time – her first time in Manhattan, that is.

The year is 1984 and Carrie Bradshaw is 16 years old and living in Castlebury, Connecticut. It’s the ultimate in suburban privilege, a life that many would dream of having – except that her mother passed away from cancer three months before the show begins. The once idyllic image of well-manicured lawns, white picket fences, and smiling family photos has been ripped to shreds; Carrie’s reality is now a father who doesn’t know how to begin to put the pieces back together, a rebellious little sister who grows more distant by the day, and a reputation of being “the girl with the dead mom” that follows her to her first day of junior year. While she has support in the form of best friends Mouse, Maggie, and Walt, Carrie’s real salvation comes when her father suggests getting an internship at a Manhattan law firm, which will hopefully give her a sense of direction and keep her mind occupied from focusing on her mother.

But how will Carrie react to going from a sheltered existence hidden among the conformity-loving masses of Connecticut to experiencing the cultural mishmash that is Manhattan?

The thing to know about The Carrie Diaries is that it’s not merely teenage Sex and the City. There are no awe-inspiring designer clothes, there’s no seemingly endless stream of men with alternately disturbing and hilarious sexual kinks, and there’s maybe one bad pun in the bunch. What lies in their place is a sweetness that Sex touched on but never stayed on. While Sex could be looked at as a treatise on the power of female friendship and a look at the male-female relationship power dynamics of the new millennium, The Carrie Diaries is about the battle that all teenagers have to endure – the search for self – as well as the loss of innocence and what that means going forward into adulthood. It’s a story that isn’t relegated to merely people of a certain gender, people born in a certain time period, or people of a certain social caste; it’s something born out of a confusing time in everyone’s life and in many cases, that uncertainty doesn’t go away upon hitting adulthood.

All that being said, the execution is what makes it such a pleasure. The Carrie Diaries could have easily faltered, but the pilot episode is full of self-assured storytelling, emotional intelligence, and the ability to use both humor and pathos without jarring the audience. There’s a lot more heart in the show than I think anybody could have expected and it feels like a fairly grounded look at the impact of loss on a still-impressionable young woman, interesting ground for a CW series to explore. The key going forward will be continuing to balance the role her mother’s death will play in the rest of the series with the lighter, breezier moments that will come from Carrie’s further exploration of the city and her flirtation with the new kid in school, rich bad boy Sebastian. The pain from losing her mother will, of course, always be there and play a part in her decision-making, particularly when it comes to Carrie wanting to fulfill her dreams and take a risk in order to make them happen, but just how heavy the show is willing to get remains to be seen.

The best asset that The Carrie Diaries has in keeping momentum from the pilot is undoubtedly star AnnaSophia Robb, who manages to bring out the essence of Carrie Bradshaw while providing just enough difference from adult Carrie to where it doesn’t feel like a Sarah Jessica Parker imitation. Robb’s Carrie is still insecure, obsessed with fashion, and overthinks everything like Parker’s Carrie, but she brings an innocence and vulnerability to the role that makes the character feel fresh. As a fan of Sex and the City, I recognized the Carrie Bradshaw that I watched for six seasons in Robb’s authentic performance, only you could see that love has yet to knock her down. Watching the character begin to grow into the Carrie we met in the pilot, experienced in matters of the heart and comfortable in her womanhood, should make The Carrie Diaries a show to keep an eye on this season and hopefully many more after that.

The Carrie Diaries airs tonight at 8:00 on The CW, with the pilot repeating at 9:00 and again on Thursday, January 17th at 9:00. You can check out three sneak peeks from the premiere here, as well as full episode descriptions for the first two episodes here.