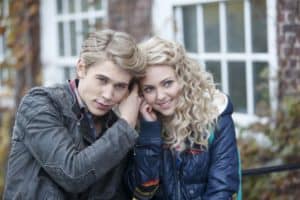 Carrie and Sebastian are still seeing one another, despite her father forbidding her at the end of last week’s episode of The Carrie Diaries. Carrie feels pressure from him to be the “perfect daughter” and to live up to everything he has set in his mind of who she should be, something that Mouse identifies with thanks to her overprotective parents and Maggie can’t relate to due to her parents loving Walt. She later talks to Larissa about her love life and the Interview editor extolls the virtues of an uninhibited sex life and the joys of being with a bad boy, telling Carrie that “men are no good if they’re not bad.”

At school, Carrie bonds with Sebastian over the new album from The Cars, which the two listen to on his tape player, and plans to go out to get something to eat together. Once she gets home, she runs into a brick wall trying to appeal to her father and get him to reverse the ban on dating the rich bad boy; she does figure out that Sebastian was one of his clients, though, and sneaks into Tom’s office to find the file with information on what exactly Sebastian did. It turns out that he had “intimate relations” with his art history teacher, which Maggie roundabout defends and Mouse finds herself repulsed by. For her part, Carrie doesn’t know how to react to the news, but she shows up for their date anyway, where Sebastian has a bag of chips and an extra pair of headphones in the park. The two begin listening to the Cars album and share a tentative kiss, though he makes a remark about the person who taught him to kiss being a “good teacher” that makes Carrie leave in a hurry.

After a night out with Larissa, Carrie decides to define what she wants out of life lest someone else do it for her and what she wants is Sebastian, regardless of his past. She tries confessing to her father that she went into his office and read the file, leaving him to wonder if he could ever trust her again, while telling Sebastian that she knew what happened caused him to call her Carrie for the first time, complain about things getting too complicated, and end things before they truly began.

Boy, Boy, Toil, and Trouble
While Carrie was dealing with her own love complications, both Maggie and Mouse were at opposite ends of the boy spectrum. Maggie is reeling from Walt breaking up with her after two years together, afraid to tell her parents what happened and clinging desperately to the idea that she isn’t the drama queen that Carrie and Mouse pin her as. Her room is still filled with mementos of their relationship, though, and even with all of her talk about how she’s over it, she’s yet to be able to let anything go.

Until, that is, she ran across Bear-Bear, a giant stuffed panda that Walt won her at the spring carnival and a reminder of the first time they kissed. At first saddened by looking the beginning of their relationship in the face, Maggie takes a sharp object to the animal and ends up both gutting it and ripping its head off. Faced with the idea that maybe she is a drama queen, she runs over to Carrie’s, though only Dorrit is home. The 14-year-old proves to be good company and calms Maggie down, reassuring her that Bear-Bear didn’t die in vain and that she needed to let out her emotions concerning what happened with Walt. Maggie decides to stay and help Dorrit find her hamster, with Dorrit stitching the bear back together again with red thread. The death of Bear-Bear proved to be mightily cathartic for Maggie – except for the picture of her and Walt left hanging up in her room.

However, she also tries to get Carrie to own her power and show her vagina to the crowd, which she rejects, explaining to Larissa that by not doing it, she was owning her power – her way. Larissa understands and tells Carrie that they need to do lunch before scampering off.

Morrissey the Hamster
Tom has been having to adjust to life without his wife even more than Carrie and Dorrit, particularly when it comes to meeting women and keeping the household running smoothly. He meets a woman in the grocery store while trying to figure out which brand of tampons to buy Carrie, messes up in buying Dorrit’s favorite food (Stouffer’s French Bread Pizza), and goes out to a night club with Harlan, the man who got Carrie the internship at the law firm. There, another woman gives him her number after hearing about the passing of his wife, something that Harlan loves and encourages Tom to take advantage of but something that Tom’s not ready to do.

Dorrit steals a hamster from the mall and names him Morrissey, only she didn’t buy any supplies for him for fear of getting caught. Currently, he has a shoebox and some newspaper for a home – unfortunately, he doesn’t take to it and escapes while Dorrit’s home alone. When Maggie comes over, Dorrit gets her to help look, though the two can’t find him. Later, Tom brings him into Dorrit’s room after finding him chewing on the stereo chords and allows her to keep him, since her mother had said that she could get one.

Additional thoughts and observations:
-“I keep forgetting how long-legged I am.”
-“I’d show my vagina, but I still got a penis.”
-I thought the voiceovers and music cues were especially effective here.
-Roue doesn’t mean “bad boy” in French – it means wheel. Oh, Larissa.
-I’m glad that they didn’t make Sebastian into a hardened criminal or anything for the sake of drama, plus I’ve never heard “he used to do the teacher” used as a reason not to date a guy before.
-That being said, the scene where he and Carrie kiss while listening to “Drive” was beyond romantic and lovely to watch.
-Does anyone say “pink panther” to describe a vagina? Anyone?
-I loved the little wink of Larissa saying she could see Carrie on the side of a bus.
-The Franklin Furnace is real and you can find more information about it here.
-Next week on The Carrie Diaries: Carrie goes to a Halloween party in the city with Walt and Larissa, while Maggie and Mouse go to a party at Sebastian’s and Dorrit spends time with her father.