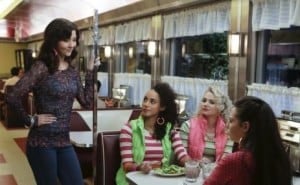 On The Carrie Diaries, it’s all about what’s new in the life of Miss Carrie Bradshaw. In this episode, what’s new is the guy. Carrie meets George Silver when she literally runs into him while working at her internship in the city. Turns out, they’ve met before. When they were little, he visited the suburbs with his family and infected her with poison ivy. While Carrie does her best not to hold a grudge, George can’t seem to stop himself from bragging about all of the more exotic places he’s been since their last meeting. Carrie is unimpressed.

“Nobody ever tells me the truth.”

George is so taken with Carrie’s truth telling that he invites her to his mother’s next big ‘soiree.” Carrie isn’t sure, though and turns him down. After talking about it with Maggie & Mouse, they dig out from her that it’s because she’s still holding out hope for Sebastian. Mouse thinks there’s still a chance. After all, her and Seth were able to mend fences. Though, as Maggie points out, they still haven’t done the deed since their reconciliation. Maggie convinces both Carrie and Mouse that the only way to make a guy want you is to be unavailable.

And just when Carrie thinks she’s got it all together, she catches Sebastian making kissy face with the horrible Donna LaDonna in her mirror, mucking up her whole driving test. She plays it cool with Sebastian, of course. After all, she has a new guy of her own! And one missed driver’s license equals a brand new date. Carrie is going to attend George’s mom’s party after all!

While choosing a dress for George’s mom’s party (his mom prefers to be called “Kik”), Carrie runs into her usually horrible boss, Barbara. Turns out, Barbara knows a thing or two about these parties. She not only helps Carrie pick out just the right dress, but pays her a compliment as well. Barbara has known George since he was 4 years old and she’s happy that he would go out with someone who knows the value of hard work, a compliment Barbara doesn’t give out lightly. Carrie is taken aback by the acclaim. But Barbara’s help doesn’t stop there. When George shows up in black tie, she helps Carrie transform her cocktail dress into something more fitting for the occasion. Maybe Barbara doesn’t suck!

At the party Carrie is confronted by George’s ex, Blythe, who tries to put her to shame about who she is and where she comes from. When George is called away by his mother, Carrie steals into the restroom to call Mouse for some moral support. Mouse is able to talk her down from her ladder of insecurity but when Carrie moves to rejoin the party, she overhears George having a conversation with his disapproving mother.  “She didn’t know what couture was.” Apparently George’s mother went slumming once, for a man less than her status, and it didn’t work out. George refuses his mother’s reasoning and goes after Carrie. 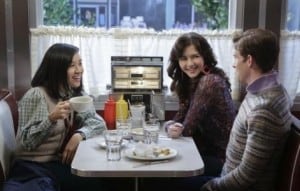 When George catches up to her, he is able to convince Carrie that his lifestyle doesn’t dictate the person that he is and that, just like her, he is looking to change his life. He escorts her back to the party where they must face a sobbing Kik. Once Carrie gets her alone and refuses her sob story, she learns that George’s mom once knew her own mother. In one of the sweetest and most heart breaking moments of the series thus far, Kik tells Carrie about what her mom was like before she left the City for the suburbs. It was hard for Grace to leave New York and the life that she loved, but she knew that she was doing it for the best reasons: her kids. In the end, Kik is able to give Carrie a piece of her mom she never knew existed and, is able to approve her son’s appreciation of the girl from the suburbs.

Through his connections and his family, George is able to give Carrie something she hasn’t had before: a New York City link to her mother and a view of the Upper East Side. Carrie is able to give George something too! Once she gets her driver’s license, she is able to teach him a whole new lesson.

While Carrie is in the city, Mouse is busy learning a lesson of her own. She’s worried about sex with Seth and wants to be good at it. She goes to Walt for help and he shows her what made him good for Maggie: porn tapes. Mouse takes all of the notes and puts them into action. Seth is impressed but assumes that it’s because she slept with someone else while they were broken up, just as he apparently did. Twice. Mouse is afraid to refute the assumption, telling Seth that Walt was the guy who taught her all that she knows about sex. She keeps the lie alive until a very jealous Seth runs into Walt at the diner. Right before Seth knocks him out, Mouse admits that it was just through tapes that she learned her skills. Then and there, she and Seth agree that double standards will not work for them going forward.

Before everyone else arrives at the diner to discuss their current issues, Maggie is busy defending their territory. The most evil Donna LaDonna is trying to take it over. Turns out, her new boy, Sebastian, likes the grilled cheese there. Donna and Maggie duke it out and Maggie wins. But it’s not really settled until Sebastian shows up and tells Donna that she’s mean. And he likes her. Not because of that, but despite it. She leaves with him, giving up the table and the diner, but Maggie is afraid for what it might mean for Carrie.

The saddest of all is Tom losing his wedding ring. It was “the most important symbol” of his marriage. His friend asks him, “Would you ever have stopped wearing it on your own?” He’s so upset and distracted by the loss that he actually bumps a woman with his car, nearly running her over. When the woman asks him if he is married, he must finally admit that he is not. She asks him for a date. And while he might be coming to terms with not being married any longer, he doesn’t seem quite ready for that.

– “Adorable and rich trumps stupid, any day.” Maggie is pretty much the best.

– “I also learned I would get hair under my arms. I was traumatized.” I love Walt so much.

– Walt’s face when Mouse explained how she likes to squeeze the “golf club” and hold it really tight, was absolutely priceless. “Okay. That’s not good.”

– I love what Carrie did with the cocktail dress. In 2013 I would still LOVE to rock that dress.

– Little Mouse. The Feminist. Love her. “So if you sleep with a bunch of girls, you’re cool but if I do, I’m a slut?”

– “I have two older brothers and I’m not afraid to bite.” How awesome is Maggie?

– “I told my father I’m not going if we don’t fly privately. I don’t care if it takes a few hours longer. I don’t want to sit with the masses.”

– The phone in the bathroom is hilarious. I wish they still did that in fancy places. Actually, the phones all over this show are fabulous. The 10 pound cell phones, the home phones with cords. LOVE.

– “Damn, you can run in heals?” Something Carrie has always done to impress me.

– “Gone Daddy Gone” by the Violent Femmes is such a dope song.

– Can we talk about how Carrie parallel parked that giant boat of a car? I still can’t park a tiny Honda.

Next episode, Carrie tries her hand at a family dinner and things maybe don’t go as planned. Watch a promo below: