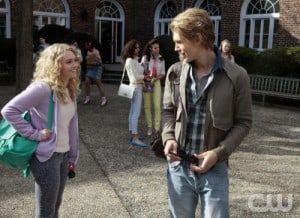 The year is 1984 and young Carrie Bradshaw is heading into her junior year of high school. It should be a time of excitement and exploration, a chance for her to figure out who she is intellectually, socially, and romantically while in the planning for a future away from her hometown of Castlebury, Connecticut. However, that all changed once her mother passed away the previous Memorial Day, meaning that the summer was tainted by sadness and grief; the one carefree time in her life is no longer that, instead replaced by a feeling of obligation and uncertainty. Will things ever get better for her on The Carrie Diaries?

Home (Not So) Sweet Home
Carrie lives with her father and 14-year-old little sister Dorrit, both of whom are taking the death of the family matriarch in very different (but equally difficult) ways. While their father is afraid to admit that his spouse is actually done, unwilling to let Carrie wear one of her dresses on the first day of school out of concern for tears/stains, Dorrit’s started doing drugs, wearing dark make-up, and being very aggressive, biting Carrie when they get into a fight over a lost purse.

Once Carrie gets home from her first day of school, she goes looking for the purse, which was their mother’s, again, eventually finding it hidden in a stuffed animal and covered in spilled nail polish. She accuses Dorrit of wanting to destroy it, but Dorrit counters that Carrie got everything with the mother – a 16th birthday, two extra years of time together. Rather than getting into another scuffle, Carrie decides to let go of her anger and hang on to the purse, transforming it into something fun and funky by adding different colors of nail polish and a bright pink signature.

Carrie gets home from her night out in New York and finds out that her father called the cops – on Dorrit, who comes home that morning drunk. Carrie then yells at her sister and tells her that she’s tired of worrying about her before storming up to her room. Her father joins her and confesses his desire to not be the disciplinarian of the household due to the fact that his wife was the tough parent and him assuming her role would make her death more real. However, he does come around and he lets Carrie and Dorrit into their mother’s closet, which they’ve only been in once since her death. He gives Carrie the dress that she wanted the other morning and she gives it to Dorrit as their mother loved her in green.

Later, Carrie finds a series of blank journals that belonged to her aspiring writer mother. Her father lets her keep them and she begins writing in one as the episode ends.

Donna LaDonna and the Jens
Due to the tragedy in Carrie’s life, people at school are gossiping about her, making her feel like The Girl with a Dead Mother rather than simply Carrie, a girl whose mom passed away recently. The ones who aren’t gossiping, like Donna LaDonna and her clique (The Jens), are feigning sympathy in an attempt to seem like a better person, but Carrie can at least be normal around her friends. There’s shy intellectual Mouse, sarcastic Maggie, and Walt, Maggie’s fashionable boyfriend – oh, and there’s the whole matter of Sebastian, the good-looking bad boy who recently started at their school after being kicked out of several recently. He makes an effort to offer (sincere) condolences to Carrie for the loss of her mother, stunning Donna and exciting Carrie’s friends; the two do, in fact, know one another, as they hung out at a local swim club where they flirted a lot.

Later, after hearing about how nerdy Mouse lost her virginity to a college guy and how Maggie had already lost hers (presumably to Walt), Carrie goes to her “hiding spot,” where she finds Sebastian, where the two talk and we flash back to the time at the swim club. When not talking about video games, Sebastian became her first kiss, only to quit coming around once the pool at his house was built. While trying to ask him to the upcoming New Beginnings dance, Carrie sees her father in the hallway and again flashes back, only this time to the day her mother died and passes out; however, he wasn’t there to give bad news. He was there to tell her that he talked to the guidance counselor about getting her an internship at a friend’s law office in Manhattan for one day a week, which she happily accepts.

New York, New York
Carrie arrives in Manhattan and promises her dad to be home by curfew, as she’d be going straight from work to the dance. Her internship turns out to be filing cold case information in an enclosed office with no window (or personal calls), not exactly the ideal getaway to the city. When she goes to Century 21 on her lunch break to get new pantyhose, as hers had ripped, Carrie gets harassed by a woman who seems to be trying to take her bag – it turns out that this strange woman is Larissa Loughton from Interview and she wants to us the bag in an upcoming shoot described as “A Midsummer Night’s Dream meets Scarface.” The two bond over clothes and Plato quotes, with Carrie providing the distraction needed for Larissa to steal a dress for “the thrill of it” and Larissa inviting her out to hot club Indochine. Once they part and Carrie goes back to work, she gets a call from Mouse about Sebastian, who wanted Carrie’s phone number, though when Carrie tries to call home, Dorrit takes it off the hook, hangs up, and leaves with her backpack.

Carrie ends up going to Indochine rather than the dance and gets to hang out with a cornucopia of artists, writers, and musicians while sipping champagne. However, once she sees that it’s near midnight, she has to go home; she gets Walt to pick her up and the two compare notes from their evenings. (Example: Carrie had champagne, while Walt and his friends shared a six-pack of peach wine coolers.) The dance also found Donna LaDonna trying to hook Sebastian, who Carrie and Walt run into doing drugs in Sebastian’s car. He tries to explain, but Carrie’s not mad – she rejects his offer to join them and leaves with Walt, who confides in her that he doesn’t know about his relationship with Maggie.

Additional thoughts and observations:
-Programming note: I’ve only seen the pilot in advance and since I’m also recapping Bunheads, recaps of The Carrie Diaries will be up a little later.
-I liked them including the voiceovers. It felt like a nice Sex and the City touch and they weren’t as intrusive as, say, Emily Owens, M.D.
-That green and white dress was really something, huh? As was the nail polished bag.
-What do you think about the mix of 80s covers and originals?
-Donna LaDonna and the Jens: formidable foe or girl band waiting to happen?
-I might be alone in this, but I found Sebastian’s entrance (and each of his pool encounters with Carrie) to be super hot.
-Are you expecting the show to handle Walt’s sexuality well? For all my love of it, Sex and the City didn’t do that well in depicting homosexuality (minus a couple Stanford plots), but I think Carrie can make up for that and then some.
-I like that they made each of Carrie’s friends different than her Sex counterparts; Mouse and Maggie may be vaguely Charlotte and Samantha reminiscent, but they’re not carbon copies.
-Larissa’s more than a little nuts (“I collect people,” going for Carrie’s bag, stealing the dress), but I kind of love her already.
-How great was that final moment with Carrie getting the journal? It’s little stuff like that that will make The Carrie Diaries special.
–Next week on The Carrie Diaries: Thanks to being grounded and an increasingly aggressive Donna LaDonna, Carrie worries that Sebastian will lose interest in her, causing her to bail on plans with Dorrit. Elsewhere, Maggie’s sex drive continues to turn things between her and Walt sour, while it’s time for the Interview shoot with Larissa and Carrie has to scramble to make it work. 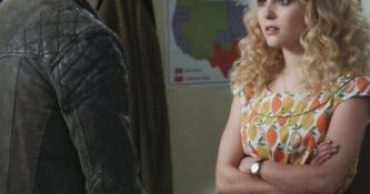 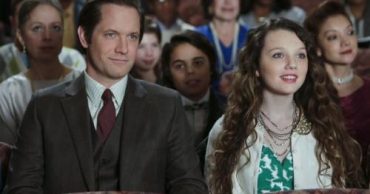 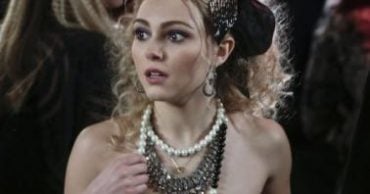 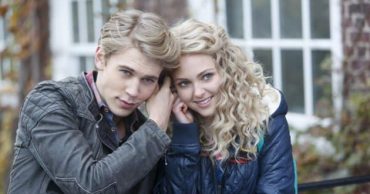 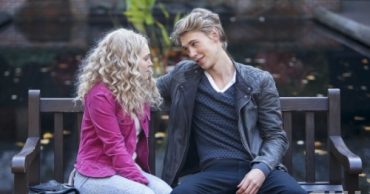 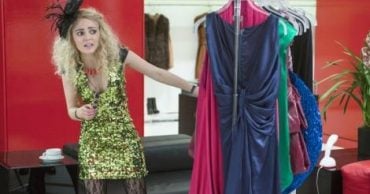