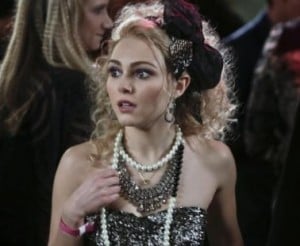 The Carrie Diaries has gone full on Madonna and it’s magical. At least, it should be.

I am in love with Carrie and Sebastian as a couple. When he looks at her in that dreamy, heartthrob way, the bottom of my stomach falls out and the feeling of every high school crush I ever had comes rushing back. Sebastian isn’t just crushing on Carrie, though. He LOVES her! And unlike most guys his age, he’s actually able to use the word. Carrie has a confession of her own for him. It’s not the L word. It’s the S word. The one that ends in E-X. And she wants her first time to be with Sebastian. It was less romantic and a little more blurty. She tells Mouse she really DOES love him, though! She just needs the perfect time to tell him.

What would be more perfect than an Interview party kicking off Madonna’s “Like a Virgin,” tour? Larissa hooks Carrie up with a couple of tickets and when she tells Sebastian she wants to make a whole night of it, I have to squeal into my pillow. When they’re on the train into the city, Carrie stumbles across the perfect moment to tell Sebastian that she loves him, too. And then… the moment is passed and she didn’t get it out. They have the whole night, though. Right?

The party becomes slightly less perfect when they arrive to find that Sebastian is not on the VIP list with Carrie. He wants her to just let it go so they can enjoy the un-VIP part of the shindig but Carrie refuses to give up. After talking a mile a minute to a large handed man about borrowing his wrist band, profuse apologizing to Sebastian for leaving him alone, she finally gets him into the right side of the party. She apologizes to him some more but he tells her unnecessary. He’s okay on his own. Which is good since she has to run off again to help Bennet get a quote for the magazine. This time when Carrie apologizes and he has to tell her again not to be sorry and that he’s okay being left alone, there is a sadness and bitterness in his voice that rips my heart in two. Choosing between the dream guy and the dream career? Not easy for any modern woman. 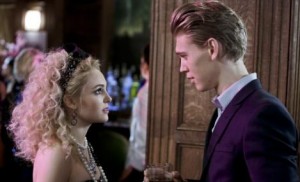 When they leave the party, Carrie is ecstatic. She got the great quote and a real step forward in her career at Interview. It maybe be the best night, ever! Or not. Sebastian is upset that she’s so excited about her byline
when the night was supposed to be about the two of them. Their fight! UGH! All about her perfectionism and his walls; where he doesn’t say enough but she says too much because she’s afraid of losing control of the situation. Just rip my heart out, why don’t you? Will She loves him and never got to say it. If only he’d have fought for her! SEBASTIAN! Their breakup is causing Carrie physical pain and I am feeling it with her. Ouch. Carrie Bradshaw be forever doomed in front of the Plaza?

Mouse is going just a bit overboard in her mission to avoid West (who she has finally admitted is so hot). She has made it her goal to join every single club they have at school and because she’s Mouse, will probably be made some kind of officer of each. Just thinking about it is exhausting. One of her projects is to help raise money for Africa on the heels of the “We Are the World,” campaign. Donna attends hoping that they’re there to watch the video. Does anyone else crack up laughing every time Donna opens her mouth? The lady is hilariously honest in the meanest way possible. She’s fantastic.

Unfortunately the only one who sticks around to help Mouse out, is West. And when poor Mouse just can’t take being around him any longer, she loses her vice-tight grip on control and goes in for the kiss. A kiss that leads to clothing being strewn about. Good for her! Though, does anyone else find it a tiny bit sad that Mouse is so concentrated on college that she can’t even see how much West really likes her? She is so afraid to lose even a little bit of control and letter herself go. That can’t be good for anyone. I’m glad he pushes her. She needs West in her life. Even if it does mean Cornell.

At home, Tom and Dorrit are both keeping secret crushes. Tom has apparently kept in touch with the gum chomper he made out with in his car (Deb) but he doesn’t want the girls to know. And Dorrit is spending more time with her record store kissing buddy. Miller is introducing Dorrit to a whole new world, including George Orwell and the idea of rebelling without letting anyone know that’s what you’re doing. This way of thinking leads to an eyeliner-free little sister and she is SO CUTE!

Dorrit gets her own taste of Donna when she shows up at the dinner and in a surprisingly sweet moment, talks to Dorrit about sex and the power balance of relationships. It might not be great advice, but Dorrit seems able to communicate with Donna much easier than she ever does with her own big sister. When she goes back to Miller, she wants to talk about sex. Her story about waiting alone to see if anyone would check on her is heart crushing. But he seems to understand her vulnerabilities and refuses to take advantage of them. I’m so glad she found such a sweetie!

– I still have the Trivial Pursuit board Carrie & Sebastian were playing on. It belonged to my parents and I know all of about 15 answers in the whole game.

– Carrie’s outfit for the party is AMAZING. Why don’t people still dress like this?

– What a perfect use of “Promises Promises” by Naked Eyes. Love that song.

– “You’re so cute with your morals.” “Not that I was looking but Sebastian has pretty big hands, right?” How great is Bennet Wilcox? ADORE him.

So, is anyone else completely broken up about the break up? This show really does such an amazing job expressing real teenage angst and emotion. That last moment when Carrie is in her room alone, brought me to tears. And there’s only one episode left this season! Just enough time for them to make up. Right?