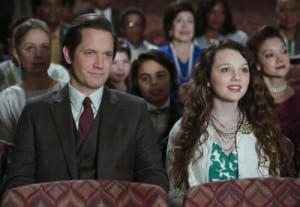 This week’s all new episode of The Carrie Diaries has Carrie and her friends facing a lot of tough decisions. That’s what growing up is all about, right?

The first big decision for Carrie is all about choosing to move on from Sebastian. Sure, they had a nice time when he popped over for Thanksgiving and when Carrie gets tripped up in the hallway at school, he is there to catch her fall and flirt with her mercilessly, but she has George now. Her big time New York City boyfriend. George is hoping to get in some down and dirty time with Carrie at her internship but Carrie is afraid to look unprofessional in front of Barbara. Even if “Barbara” is 90 minutes late to work.

Barbara is 90 minutes late to work because she spent the night at her boyfriend’s house. Though, I’m not sure that’s such a bad thing as it seems to have taken away a bit of the whine. Mouse cannot believe that an adult would be so irresponsible, putting a guy above her career. Oh Mouse. Never lose that innocence. The girls are trying to figure out why Carrie hasn’t invited George to the dance yet. Could it be because she still has a thing for Sebastian? After all, she didn’t tell George about Sebastian’s Thanksgiving visit. Is it because she has something to hide? Carrie feels bad about not telling George but denies that it has anything to do with still liking Sebastian. Sebastian probably didn’t tell Donna about it either, right? Except that he did. Donna makes a point to thank Carrie for taking him in. Was she reading too much into it? She calls George and invites him to the dance in order to prove that she wasn’t.

When Carrie catches Sebastian staring at her and George at the dance, it appears as if maybe she wasn’t reading too much into it at all. He seems positively jealous. Carrie confronts him and he swears it’s not the case but Carrie decides to escape his gaze with George anyways. They end up in George’s town car, complete with driver. George thinks Carrie dragged him away so that they could do the horizontal Mambo. But Carrie’s virginity means more to her than losing it in the back of a car with a driver looking on. George doesn’t really get it but agrees that sex can wait for now. Can Carrie help him out, though? Disgusted, Carrie breaks up with George for trying to pressure her and decides to walk home from the dance with Maggie.

Mouse’s huge dilemma came in the form of her very first devastating B+ on an exam. Apparently she had been getting down with Seth the weekend that she was supposed to be studying for the test. She convinces her teacher to let her make up the grade but it means getting a lot of work done before 8:00 PM sharp the night of the dance. When she shows up 7 minutes late to turn in the extra credit, she and Seth try to slide it under the door. Only, it ends up sliding right under the desk. Seth takes one of Mouse’s hair pins and as he is attempting to pick the lock, gets caught by a janitor. The teacher agrees not to suspend her but she has to keep her B+. Seth confides in Mouse that his grades have been suffering since they started going out as well and they decide to break up so that they can concentrate on what’s really important to them: their future. 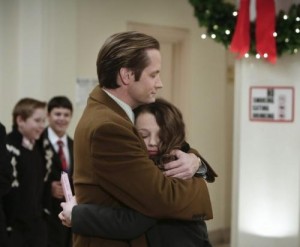 When Walt winds up with the chicken pox, Maggie has to attend the dance alone. Even before his sickness, though, their sex life seemed to be hitting a “drop off” and Maggie was concerned. At the dance when Maggie is forced to watch everyone slow dancing with their boyfriends, she escapes the dance and falls right into the back seat of Simon’s cop cruiser. Unfortunately Donna catches them coming out from their tryst and decides to use it to blackmail Maggie into helping Donna keep Carrie away from Sebastian. Apparently the group of people who still think there is something between them is larger than originally thought. When Maggie wonders if Carrie can’t get back with George, she finally breaks down and admits the whole affair with Simon and what Donna is making her do.

Back at home, Dorrit receives two tickets for The Nutcracker in the mail. An event she shared with their mother every holiday season. Carrie can’t go because she’ll be at the dance so Tom offers to take her instead. Despite the occasional bouts of her usual bratiness , Dorrit seems to be enjoying herself. Until she catches Tom sleeping during the first half of the show. She throws a bit of a tantrum and Tom has to explain that he’s tired because he was working so hard to be able to attend the show with her. Poor Dorrit doesn’t feel like she has anyone anymore now that her mom is gone. Tom does his best to convince her that he’s there for her. His confession and some Jordan almonds soften her a bit and she’s able to smile through the rest of the performance.

Carrie’s second big decision comes when she meets up with Larissa and the new issue of Interview Magazine before it goes to press. Carrie is able to get a sneak peek at the layout featuring her signature purse. The headline isn’t quite right, though and when Carrie helps come up with the perfect caption for the article and an idea for a new photo shoot, Larissa offers her a job. Only, Larissa still thinks Carrie is an adult who pays rent. It’s a non-choice for Maggie who thinks she should drop the law firm immediately for the chance to possibly meet the Karate Kid. The choice is made harder for Carrie when she finds out how hard it was for Tom to get her the law firm internship in the first place. In the end though, she can’t deny what could be her destiny, refusing to live with possible regret and she agrees to take the exciting new job.

– “I’m wearing the same clothes from yesterday.” Way to own your walk of shame, Barbara.

– “If I’m still dating and talking about guys in my 30’s, someone needs to smother me with a pillow.” Try 40’s Miss Bradshaw.

– Carrie’s entire dance ensemble including her up do and her shoes, is absolutely divine. I would totally rock that outfit. Maybe not to the grocery store, but still.

– “You guys seem like a lovely couple. Your size difference is positively charming.” Donna is the best villain on TV.

– Talk Talk’s “It’s My Life,” is the PERFECT song for the end of the episode and makes the moment Carrie walks into Interview Magazine that much more epic.

Check out a promo of the next all new episode of The Carrie Diaries: