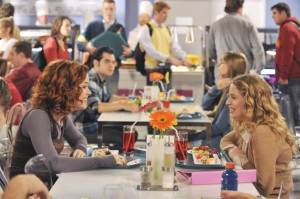 After the last new episode of Suburgatory, which saw Steven’s cheating exposed, you couldn’t really be blamed for thinking that it wouldn’t be addressed. Well, at least for a little while, considering the will they/won’t they status of George and Dallas heavily hinged on the fact that the latter was still legally married. Additionally, Suburgatory has never been a terribly plot-heavy show, happy to luxuriate in rapid-fire joke detonation and mirrored antics of a single dad and daughter, and the prospect of following up the revelation in “The Casino Trip” didn’t feel like something it would do (yet). In a television world that likes to draw out certain plots for season upon season, getting Dallas free from her loveless marriage seemed like something to be taken care of at a later date.

Surprise, surprise, then, that “Sex and the Suburbs” didn’t let us twist in the wind for too long about the fate of Dallas’s marriage. In fact, following the discovery of a strange pair of panties and an enlightening conversation with pseudo-daughter Tessa, Dallas went ahead, filed for divorce, and triumphantly danced around her house. It was a touching moment, in that Suburgatory has made a point at showing the kind, warm person that Dallas is behind the leopard print. After 13 episodes of getting to know her, you want to see Dallas happy and not having to go-along with some invisible rule that a man who provides for his family to get carte blanche to do anything he wants. Although I do admit that I’m rooting for George and Dallas to find one another when the moment is right, the main reason I loved Dallas standing up for herself is that it happened due to a moment with Tessa. Call it a contrivance, I fully believe that Dallas had compartmentalized Steven’s actions and it took seeing another person going through something similar for her to finally get that this was no way to live. She and Tessa have formed a pretty strong bond since the latter came to town, both filling in gaps that the other had in her life, and using that connection was simple yet very effective at moving Dallas’s plot along. They may not go to the Dallas/Tessa well that often, but now that a relationship has been developed between the two, it could be wise to trot the pairing out more often.

George, meanwhile, took it all the way back to the pilot with another freak out over Tessa possibly being sexually active. And like the cheating revelations, this traces back to last week with the discovery of Lisa’s Love Box and the XL condoms. Some may decry the fact that it’s essentially a repeat of a story from the pilot, but to me, it felt like a fun way to revisit the central premise of the series. George may still be in hyper-protective mode, but “Sex and the Suburbs” touched on some internal issues that gave his story a little more depth. Thus far, we’ve only known George Altman, lonely single dad trying to do his best for his daughter, but that loneliness and self-imposed isolation finally got to him to the point that he turned into…”Gorgeous George”, babe slayer and all-around hunk-o-rama. At the behest of Noah, George tapped into a former life in order to better understand Tessa’s budding sex life, hooking up with club waitress Jocelyn in order to get his groove back. Without that little touch, it would have been another “single dad hates all teenage boys” type of story, but George trying to loosen up was a nice way to approach the subject 13 episodes in. Nevermind the fact that Jocelyn is a really funny peripheral character who may now turn all Fatal Attraction, but it kept George from becoming too one note in his parental life.

But was Tessa even having sex? 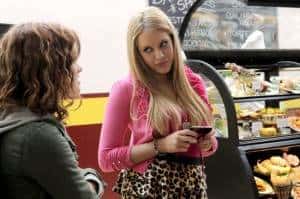 It was another false alarm for George, as Tessa was less screwing Scott and more hoping he marries Africa if he loves it so much. After making it her mission to go after the young humanitarian in “Driving Miss Dalia”, Tessa had to deal with the fact that the two had absolutely nothing in common. The depth that she thought Scott had was more like a one-track mind, only instead of sex, he couldn’t stop thinking about volunteer work. It was a quirky little wrinkle that I didn’t anticipate, in that Tessa had to confront her own shallowness after classifying Chatswin as one teeny puddle of dirty water earlier in the series. The only reason she stayed with him as long as she did was to needle Queen Bee Dalia, the envy of all of Chatswin High, and she had to finally admit that to herself before she could finally dump Scott. It’s too bad that Scott turned out to be such a dud, since Tessa had finally started developing roots in Chatswin, but keeping him around would have made her look very petty and there’s no sense in being miserable trying to prove a point. As short as it may have been, her relationship with Scott should teach Tessa that just because it looks deep and acts deep doesn’t mean there’s any depth there. Scott may have been the hot ticket at Chatswin High, but he didn’t look, act, or think like the other guys and Tessa still didn’t like him.

In a sense, “Sex and the Suburbs” was like a delayed second part to “The Casino Trip”, as the threads from that episode spilled over into tonight’s episode. It was an interesting change of pace, as Suburgatory tends to be more self-contained, and ultimately pretty rewarding for those of us that have caught every episode thus far. I don’t expect Suburgatory to all of a sudden become The Wire in terms of serialization or anything, but little arcs like this allow the show to still be its silly self while filling out its world a little bit. Chatswin is such a vivid, bright place that the start-stop method to storytelling, while helpful in snagging casual viewers, can be a little frustrating. Going forward, the journey toward Dallas and George getting together may seem to have gotten easier, but just because she filed for divorce doesn’t mean that it’ll be an easy process for her or Steven. Suburgatory may have brought together the Altmans and the Royces as bizarro versions of each other, but for the rest of season one, they’ll be needing each other more than ever.

Thoughts, Quotes, & Observations:
-“She’s got a hunger for the flesh that can’t be satiated.” Tessa’s a zombie?
-“Kiss me like I’m Africa.”
-“So what about intercourse?”
-“You forgot your squishy.”
-“These panties are a slap in the face, Aaron.”
-“Maybe I’ll even fake a pregnancy like Kenzie did.” You’ll remember that Kenzie faked her pregnancy to get out of earth science.
-“Just because you’re a dad doesn’t mean you can’t be a dude.”
-“Who’s a hungry hippo?!”
-“This goat has better judgment than you.”
-You’ll note the #1 song in the country, Kelly Clarkson’s “Stronger (What Doesn’t Kill You)”, being played during Dallas’s dance montage.
-Here’s the video about the kid just out of the dentist the Tessa mentioned.
-Lisa + Malik: are we feeling this combination?
-Ryan wants Tessa back, you guys. Are you okay with that?
-There’s no online virginity calculator, of course, but there is an instrument online to tell you how you compare to other people in your area in terms of when you lost your virginity.
-If you missed Carissa’s interview with Suburgatory star Jeremy Sisto, you can check it out here.
-Next week on Suburgatory: Tessa runs for student body president to try and change Chatswin’s sports obsession, while George mentors a recently injured Ryan. 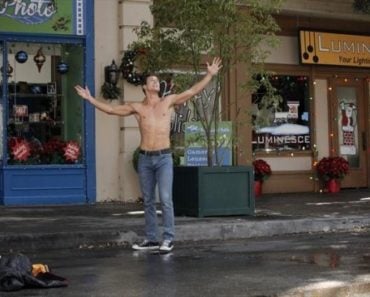 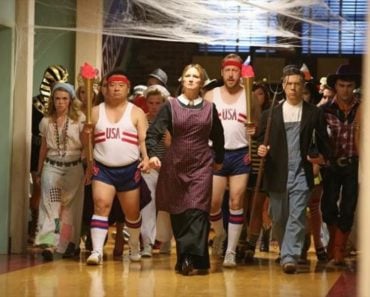 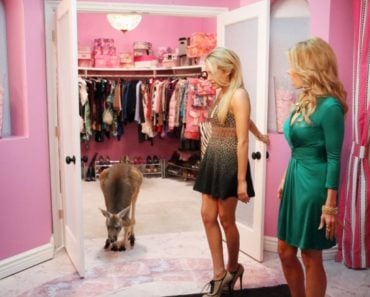 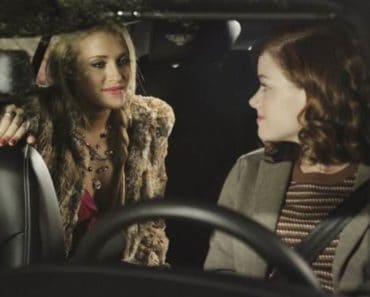 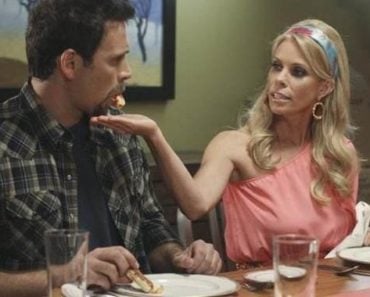