Home
Television
Suburgatory
Suburgatory 2.16 “How to Be a Baby” Recap 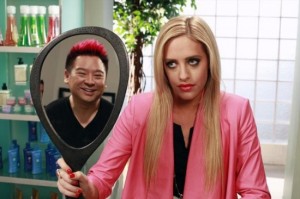 Noah has gone into therapy over his obsession with Carmen; he can only see her (and the occasional Al Jarreau) during the Rorschach Test, leading the psychiatrist to diagnose him as being in the midst of a mid-life crisis with an extra dose of caregiver transference. It should go away eventually, but until then, he suggests that George try to occupy Noah’s time and keep his mind off of Carmen through new hobbies, new foods, and light smack talk.

Nothing can get Noah back to normal, though. Or as close to normal as Noah Werner can get. Not a hip new baklava restaurant that came highly recommended by the therapist, not a trip to tap sap with George – he can’t sleep, he can’t do anything but think about being with Carmen. She seems to echo the sentiment when she gives George a blue handkerchief to give to Noah; she claims that he forgets to wipe off his touch screen and that it gets greasy without having one around, but George thinks that there’s an ulterior motive in her gesture. He tries to get Noah to get over Carmen and think about working things out with Jill, assuring him that while marriage can be hard, so is being a single parent.

However, after talking to Tessa, he reconsiders his position and realizes that he wasn’t trying to keep Noah and Jill together for Noah; he was doing it to keep Jill from feeling the same pain that he felt when Alex left him. George has never gotten over the abandonment issues he gained from his divorce and he let them take his objectivity during a time when Noah needed him the most. He then gives Noah the handkerchief that he had been hiding, causing Mr. Werner to declare that he’s leaving Jill (during her book signing) and run off to find Carmen. He encounters her in the bathroom and the two have a moment when she accidentally turns on the shower as he tells her of the 42 e-mails he wrote during their 42 days apart.

Noah kisses her while the water poured down on the both of them, but Carmen recoils, informing him that she only misses him as a boss and that she doesn’t think of him in a romantic way. Rather than leave, he stays while Carmen mops up the water that had spilled on the ground, climbing up on the toilet to watch and prove his dedication to her.

The Internship
After watching Ryan go through the college application process, Tessa’s freaking out about having to do the same next year. While working at Dallas’ crystal store, she comes to the realization that she needs to have more serious achievements to put on her application and that getting an internship with Jill would look great. Tessa immediately quits her job when “tough but not fair” Jill says yes to the unpaid internship, but before long, she begins to regret her impulsive decision.

In addition to her abusive language when Tessa gave her the wrong number of almonds for a snack, Jill has written a book titled “How to Be a Baby: You’re Out, Now What?” meant to instruct babies on how to be babies. A book that she wants Tessa to write an Amazon review over – in the perspective of Opus. To Jill, this will help her book look better to the buying public, while Tessa will have her first published creative writing assignment, one that could end up on a book jacket.

Tessa tells George that she looked up to Jill until she got to know her and that she now looks at the author as being vapid, self-obsessed, and narcissistic. George tries to defend her, but Tessa goes on to suggest that Noah should run far away from her, something that helped George understand the reasoning behind his need for Noah and Jill to get back together. At the book signing, Noah’s declaration of divorce didn’t do anything to Jill, as she was more upset about Tessa writing a negative Amazon review rather than the glowing 5-star one she was expecting. She’s already gotten started on her next novel, one that she hopes would be worth a damn.

Tessa then runs into Dallas and gets her job back at the store, seeing as how she could learn to be a better person from Dallas.

Magenta Tips from Dalia Royce
Mr. Wolfe is cleaning out his office of everything that reminds him of Chef Alan, leaving only a microwave. Dalia asks him what would make him feel better about the breakup and takes him to the salon to get magenta tips on his hair, phase one in the plan to get revenge on Alan and make Mr. Wolfe feel/look better in the process. The second phase is to find Alan’s mad/sad buttons and press them, like, 15 times, which he does by going to Alan’s job and literally eating out of the hairdresser’s hand to make him jealous. It works, as seeing his former love looking good and with another handsome guy causes Alan to cry.

Additional thoughts and observations:
-“Doesn’t the microwave remind you of Chef Alan?”
-When was the last time we saw Tessa even working at the crystal store? I honestly don’t remember.
-The joke about Carmen “polishing a knob” was very Happy Endings, no?
-Even though I think she’s still a fairly one-dimensional character, I’m glad that they let Jill be human, even if for a second, at the end of the episode.
-No joke, Dalia’s dry crying followed by “do you guys want to get sushi?” might be my favorite gag of the season. What the hell was that and how can it be implemented more often?
-The Notebook spoof was cute.
–Suburgatory will be having its final repeat of the season next week before airing six weeks in a row, including the season finale. When the show returns on March 20th, Dallas seeks solace in carbs and Jill Werner after George forgets her birthday gift, while Tessa believes she’s lost her youthful vigor and Noah makes a discovery about his psychiatrist.