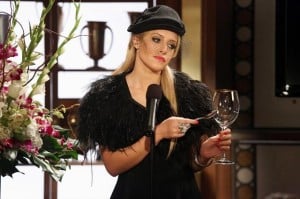 Tessa is still upset about finding out that Ryan wasn’t on a road trip, but she’s taken aback by hearing the real reason for his recent absence. There are colleges recruiting The Body to come play football for them and he wants to take an offer, thereby leaving his girlfriend all alone for her senior year of high school. He didn’t tell her before going on campus visits because he didn’t know how she’d feel about him leaving town and where that would leave their relationship, which is still in its early stages. Tessa attempts to assure him that everything’s fine and that she knew that this day would come, but in reality, it makes her question her future with him.

She meets Noah’s daughter Jenna at a local diner to talk about college and long distance relationships, which the Brown attendee advises against. Once Tessa leaves Chatswin, she argues, her perspective will change and her friends Collette and Bastian, both Chatswin refugees also attending prestigious universities, agree. Bastian, in particular, takes a shine to Tessa and makes it into a daydream she has while looking through college brochures; in the daydream, Tessa imagines her life without Ryan and honestly, she’s not bothered by not being with him and by seeing him on a train draped in a cute blonde. In her mind, they’re destined for different things, but that didn’t have to start now.

Not when he tells her he loves her. After having a talk with Lisa (and later, the guy from the photography studio) where he decides to stay in Chatswin next year, Ryan comes over to Tessa and drops 2 L-bombs. One, he loves her and loves loving her; two, he’s not going to leave. Tessa then finds out that Ryan’s trip to the photographer resulted in him giving up his most valuable asset for her. He paid the man to hobble him and ruin his perfect body…and the chance to get a primo football scholarship, which would force him to stay in town until it healed. Tessa tries to call off the hit, but the photographer pops out of the bushes (twice) and hits Ryan in the leg, leaving him uninjured.

At school, Lisa brings Tessa a cake made with cumin to make up for lying to her about Ryan’s whereabouts.

Ashes By Now
George and Noah are in the steam room with Marty, who tells them he spends 8-10 hours a day there and that for the last 50 years, he’s lived by a rigid routine. The same breakfast, the same wardrobe, no vacation time – it’s been a safe life for the 70-something, one without travel or exploration outside of Chatswin. He won’t get a chance to go out and find himself, though, as he has a heart attack in the steam room and passes away in front of George and Noah.

At the wake, Dalia performs a musical tribute to the man she never met, while we hear from Marty’s postal worker and pretty much anyone who ever spoke to him. However, Noah gets George to take the microphone and talk about their country club buddy to kill time and make the tribute more personal; George tells the crowd that the greatest tragedy is that no one in that room truly knew Marty, earning him the ashes from his cremation. The club felt that of all the people who didn’t know Marty, George didn’t know him the least and now it’s up to him to figure out where to scatter the ashes.

George and Noah decide to break into Marty’s locker at the club and put the ashes there, only they find that the old man had two tickets to Bora Bora, meaning that he was going to get out of Chatswin after all. The other ticket was addressed to a Fatima Smadja, a waitress at the diner Marty ate breakfast at every day for the previous 50 years. While she may not know his name, she knows his order and upon hearing of his passing, becomes upset. George insists she take the Bora Bora tickets, as Marty would have wanted her to go even if he couldn’t, and she kisses the urn goodbye.

George and Noah decide to drive past the Chatswin city limits and spread Marty’s ashes out of town. Looks like he made it out after all.

Additional thoughts and observations:
-“Tessa, you’re not allowed in here unless you have a penis.”
-“Marty was mispucha to me.”
-“I’m gonna stay here in Chatswin and I’m gonna get fat with you.”
-“Why, Lord? Hash and eggs was a good man.”
-“You’re so turned on right now.”
-So, Dalia and Evan, right? I’m very much in favor of the coupling, particularly if it leads to Dalia learning more Yiddish and the two making out in the hallway more.
-Lisa’s fox sweater was adorable. Also, apparently she’s a lady in the streets and a freak in the bed.
-Prayer circle for Jason, everybody. Let’s hope the antibiotics work and he’s able to poo normally.
-I’ve not been a huge fan of how separate they’ve kept Tessa and George most of the season, but this was one of my favorite episodes of the season. It was funny without being over-the-top and managed to bring the emotion without losing any of the humor.
-Next week on Suburgatory: Dalia helps Mr. Wolfe get over the break-up with Chef Alan by giving him a makeover and plotting revenge, while Tessa works for Jill and Carmen becomes the object of Noah’s desire.