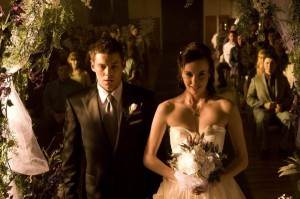 Taking a page from the hallucinatory “what if” stories in the vein of Buffy the Vampire Slayer‘s “Normal Again,” tonight’s SGU gave us “Cloverdale”, a character study into the mind of Lt. Matthew Scott after he’s been attacked by a hallucinatory flesh-eating organism, propelling him to a small town named Cloverdale where he’s about to marry Chloe.

The show starts with Scott coming home to Cloverdale with Greer to meet his “father” Col. Young and his future “brother-in-law” Eli. Before he reaches them, Scott is hit by a car driven by Brody. Other shipmates in this fantasy include Dr. Volker, who is the town’s pharmacist; Vanessa James, Scott’s ex and a barmaid at Brody’s; TJ as a paramedic; Col. Telford, who is the town sheriff; and Dr. Rush, who is the pastor presiding over the wedding.

Back in the “real” universe on another planet, a blue lifeform has taken over Scott’s left arm while his away team members (Rush, TJ, Greer, Eli, Volker and Chloe) all try to stop the spread of the organism. Nothing TJ gives Scott works and the creatures that attacked him are getting pretty hard to take out. Rush thinks it’s bad for them to bring Scott back on the Destiny, where the spores from his injury can spread and take over the ship, but suggests Col. Young send in supplies to help them battle the lifeform. After nothing works, including amputation, the situation looks dire and the creatures are getting closer.

Greer is determined not to lose Scott and brings back more soldiers to fight off the creatures, while TJ tries to pull off a miracle. After 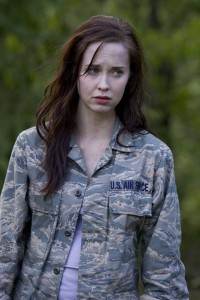 getting a rundown of the possibilities in case the alien organism makes its way onto the ship, Young demands all civilians back onto the Destiny, leaving Scott on the planet until he can be saved. While Chloe demands to stay with Scott, TJ discovers that the organism made its way to Chloe’s shirt, but it didn’t touch or infect her. This gives Chloe an idea and she leaves the camp.

While Greer and other grunts fend off the creatures by building a fort and using flamethrowers to keep the creatures from attacking, Eli tries to say goodbye to Scott, but is horrified when Chloe returns, revealing she was stung by the creatures on purpose. Dr. Rush asks Chloe why she did it, and after she explains the organism is not affecting her, he gets the idea to do a blood transfusion to save Scott. It works, but now Scott is part alien as well.

In the hallucination, Scott has a series of blackouts due to the alien spore taking over his body. While Scott slowly becomes aware that things aren’t what they seem, he starts to get cryptic “messages” from Telford, Eli, and Rush about hi’s interpretation of things in the real world. Eli declares that Scott is not a one-woman man and never has been one, which speaks volumes given that Eli is Chloe’s brother in this hallucination and Scott’s relationships have not been so great in the past.

In the hallucination, Scott visits Rush to talk about the wedding, but ends up getting a message as well. Rush tells him that he’s not going to die, but eventually they all will. While waiting to get married, Scott asks Young for guidance; his “father” says he doesn’t have the answers, but tells his “son” to wake up. At the wedding, Scott visibly gets better as Chloe’s blood is being transferred into his body, but he finally “wakes up” after he sees Chloe as a half alien. Was Scott freaked out by the sight of Chloe and what is possibly coming her way? Time can only tell. 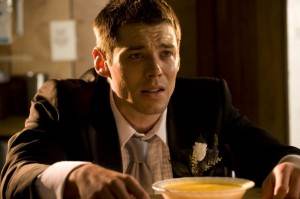 The interesting thing about Cloverdale is how it is a manifestation of Scott’s psyche. For example, he thinks of Col. Young as his father, Greer his brother, and Rush as his somewhat ‘savior’. Telford talks about his mind wipe by the Lucian Alliance and how it left him feeling guilty for his actions, which is probably how Scott perceived what was going through Telford’s mind while he was on the ship. Eli being Chloe’s brother in this hallucination also proves Scott’s outlook on the relationship between the girl he loves and his other close friend, which he thinks is totally platonic on both sides. It was the world as he saw it, but it also showed how he’s trying to deal with his new surroundings.

It’s also interesting to note that no one from Scott’s real family was used in his fantasy. This can be seen as either Scott’s brain utilizing those in close vicinity of him in the hallucination or the hallucinogen enhancing Scott’s true feelings about those around him being his family. There are probably more factors that can go into this scenario, but I’m sticking with those two for now and look forward to everyone else’s interpretation.

Before I go, we did see TJ calling Rush out for lying about Chloe’s so-called ‘cure’ from the alien gene, which I am sure Col. Young was thrilled to learn about. The complications are only going to make matters worse for the crew aboard the Destiny. I just hope no more lives are lost in the pettiness of it all.

What were your thoughts and interpretations of tonight’s episode?