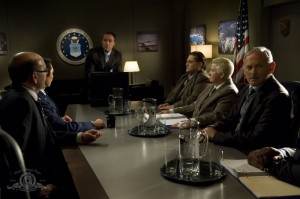 After about four weeks of Stargate Universe review blackouts, I’ve returned to discuss the show after getting over a qualm I had about continuing the reviews even though the show is about to end. Prolonged frustration of the show’s cancellation caught up to me after reviewing “Deliverance,” putting me in a state of mind of “Why Bother?” when it came to trekking on in the SGU review department. I sadly, and shamefully, admit my faux pas and hope that I didn’t disappoint anyone in light of my severe lapse in judgment and hope you will continue with me on the final journey of the crew of the Destiny.

Last night’s much anticipated episode featured David Hewlitt and Robert Picardo who reprised their roles of Dr. Rodney McKay and Richard Woosley, respectively, as they, along with Cols. Telford and Young, tried like hell to persuade the Langarians into giving them access to dial the Destiny with a modified program/calculation of McKay’s to prevent the planet from erupting. Meanwhile, Dr. Rush and the ‘consciousness’ of Dr. Amanda Perry create a sort of mental holodeck with drastic results. Both stories were pretty intense in the suspense vein, especially the ‘A’ plot involving the Langarians, because I seriously was thinking, and most definitely wanted, Young and gang to get away with their “Ocean’s Eleven”/Saved By The Bell-esque trickery with the communication stones, just only to see if McKay’s calculations would work. Sadly, we didn’t see Telford return to the Destiny, but at least we know that he can return if SGC finds a viable (and willing) planet to experiment on.

Langarian Ambassador Ovirda (guest star Victor Garber) had every reason to be scared of what Young, Telford, Woosley, and McKay were asking of him. Of course, hearing that planets have exploded when trying to dial the ninth chevron would have me in a tizzy as well if someone came to me with such a proposition. The thing is that while it was a bit risky, Ovrida could have at least let McKay confer and compare data to see if they had a feasible plan. So with the Langarians’ stubbornness in the matter, I could see where Telford and Woosley were coming from in their suspicions of Lucian Alliance interference way before Telford came up with the sound bites to uphold their claims. But the whole debacle raised several questions and dusted off some old theories/feelings as well.

First, Telford and Woosley stressed that the Lucian Alliance would be trying to access Langaria’s core by force, but wouldn’t it be more plausible for the space pirates to try and access McKay’s program first to secure their travel to the Destiny? I know that the LA nine out of ten have no clue of the program’s existence, but this goes back to my sentiment of how incredibly dumb the Lucian Alliance is. Once they get control of the Destiny, then what? It is of no use to them since there is no way of getting it back the Milky Way and Pegasus galaxies, making their whole plan basically a pointless suicide mission. How did these guys become Big Bads again?

Second, I loved how McKay raised his eyebrow at Telford’s notion of the Destiny mission being his own. Is there still some sort of resentment between Telford and Young on who’s really in charge of the Destiny? It would make sense given that each man has sort of picked a side of whether or not they should go home or finish the Destiny’s personal mission. Telford is gung ho on getting those people off that ship, and personally I don’t blame him one bit, because the people aboard the Destiny (at least most of them) are not equipped to be there in no shape way or form. The strange thing was given the hell they’ve been through trying to retrieve those people, Telford asked McKay to join the crew for the long haul. Could this be an inkling of Telford agreeing with Rush on the ‘true mission’ of the Destiny and it’s inhabitants, or at least compromising to get the right people for the job? If this is the case, it goes to show how far Telford has come in the eyes of viewers from a pertinacious grunt to a viable leader for the crew. Or co-leader at least.

Where Is My Mind?

The consciousness of Amanda Perry went from a much-needed humane component for Rush’s character to a disturbing, obsessive 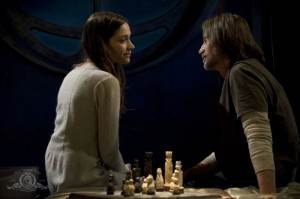 A.I. program, channeling characteristics of “2001: A Space Odyssey’s” HAL 9000.It was a bit of a let down for both Amanda Perry and Ginn to be discarded so quickly after being reintroduced and ‘saved’ in a way that could have opened up doors for more stories involving the characters. For both Amanda and Ginn to appear at will as guides on the ship was intriguing and could have went places. Maybe the writers were feeling that they needed Rush to be focused without Amanda as a distraction, which last night clearly showed her as being to the mad scientist. Despite the distraction, Amanda showed a softer, caring side of Rush that was genuine and not laced with some forms of subterfuge depending on the situation at hand. Having to lose Amanda not once, but twice now might make the already bull-headed man od science a bit more detached in the long run. Then again, Rush still has his other love with the Destiny, so technically he didn’t lose too much…

So that’s my review of SGU’s Seizure as I saw it. I would talk about Greer’s invincibility factor, but then I could spend all day on that subject. So I will spare you that much. Your thoughts?