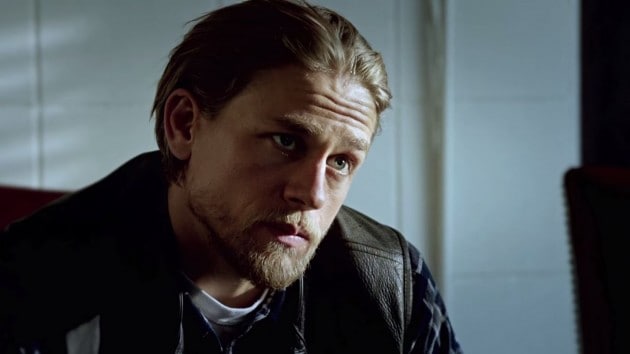 In the end, Jax Teller gave up.

In the beginning, Sons of Anarchy was a story about Jax Teller’s existential struggle, his journey to forge his own outlaw path, and distinguish his life from the life of his father’s. As the seasons passed and the bodies piled up, however, the show transformed into a soap opera, a series of increasingly loud and convoluted gang wars operating around (and most of the time, over) the show’s seemingly intended purpose, to tell a Hamlet-inspired story about a gang leader trying to find a different way.

In “Papa’s Goods”, Jax Teller does neither. He fails as a club leader, he fails as a son, a husband, a lover, a friend – and most importantly, miserably fails as a father, letting go of the one thing he should’ve learned reading pages and pages of his father’s writing for years: a child without a father around to guide him has no chance, especially in a family with a psychopath for a matriarch, and a super villian for a stepfather. There are many times early on that Sons seems to be telling this story, no more apparent than in season three, when Jax’s son gets kidnapped, and he pictures what a life for his children would be without him. Ultimately, he decides that he needs to be there for Abel, to guide him and teach him that outlaw life can be normal life.

However, as the Jax vs. Clay war heated up, and the show got more and more involved with nonsensical, pointless (save for their inherent ability to deliver shock factor and plot twists) battles with minority groups, it lost its foundation. The edgy family drama was gone, replaced by a violent, dumb, loud, and often over-complicated story about a prodigal son driving his family and club into the ground blindly, all under the assumption that he’ll be able to fix things as soon as “things quiet down”, the show’s go-to bit of dialogue during the last four seasons. And once Gemma killed Tara, the show had fully backed itself into a corner: all that was left to do was have Jax murder Gemma, something Sons managed to stretch out for thirteen impossibly long episodes of montage-filled television.

By the time “Papa’s Goods” is able to put down its various plot mechanics – a collection of stories that ALL end with “Jax puts a bullet in someone’s head in broad daylight” – and get back to the story it started seven years ago (and abandoned about four and a half), there’s just nothing left. Jax’s final day is a series of victories, an effortless, drama-free journey to suicide that the script somehow thinks absolves him of all the terrible things he’s done in his life. By accepting his fate, it’s okay that he left his children fatherless, in the same position he was? That he left his club’s reputation in tatters (but he brought racial equality by inducting one black member!!!!)? That instead of facing the man of mayhem as he promised his club, he concocts yet one more lie to absolve himself (or the club he’d run into the ground, with the other members willingly playing along)? Jax may die at the end of “Papa’s Goods”, but there’s nothing in the episode that holds him responsible for what he did – and even more unsettling, almost praises him for following in the footsteps of his father and ruining a truck driver’s life by committing suicide in a Jesus pose (seriously… poor Michael Chiklis), which is supposed to be ironic because it’s the same guy that drove Gemma to the place she died.

That’s all there is to “Papa’s Goods”: it’s such an empty finale, trying so desperately to cover up the obvious secret everyone keeps discussing off-screen without putting it to use in any kind of interesting way. After such attention on Abel (and children) the last two seasons, Abel is nothing but a prop in the finale, his usefulness as a son through seven seasons revealed to be another silly plot device; seriously, the kid’s only existed since season three so he could be around to deliver the damning blow to Gemma. It’s not like the show’s ever spent any time establishing a relationship with Jax and Abel; then there might a story to tell about them in the final season that meant something!

No; instead, “Papa’s Goods” seems satisfied with being a completely hollow episode, reduced to a series of man hugs, man crocodile tears, and Jax Teller nodding a lot to people (and himself) that everything was going to be a-OK. Jax even got to go on on his terms: on his day of judgment, Jax Teller is taught literally no lessons about his life except “it’s okay if you mess up, because your dad did the same thing”; there are no challenges for him in “Papa’s Goods”, even when it comes to superficial things like murdering the kings of the IRA or the most powerful drug kingpin in Oakland (in broad day light on the front steps of a court house, no less). “Papa’s Goods” is just one long victory lap for Jax as he murders all his enemies and passes on the Redwood torch to Chibs (whose only non-Jax scene he spends threatening Althea), an episode so tone deaf and out of touch it ends with Jax smiling as he drives into the grille of a mack truck; in its final moments, Sons of Anarchy finally became the parody of itself it had aspired to be for the last few seasons, ending a terrible finale on a laughably memorable note.

Endings for other characters? Who cares: if they’re not taking bullets from Jax Teller, “Papa’s Goods” ain’t too concerned with them (seriously: every single character in this episode gets no closure, save for our leading man). Its focus is intently on Jax, his long glances off-screen as all his plans fall into place and he gets to splatter his brains on the pavement the way he apparently always wanted to. Any lessons learned in repeating the mistakes of his father? None, except some vague, unbelievable promise that things will be different for his boys, who are going to get over their mother’s murder and their father abandoning them on a dairy farm somewhere. There’s no recognition that killing himself is only going to leave the same void left for him when Gemma had JT killed, a move that she did to build a better life for her kids (plus JT was insane, conveniently). And how did that work out for everyone?

Instead, the finale tries to convince us that Jax Teller grew up as a human being, doing the righteous thing by killing himself – unfortunately, every decision he makes throughout the final season and “Papa’s Goods” is the definition of immature, a man skirting responsibility through death (and his gun, considering the amount of murders he’s committed). Another example: he praises the club’s plan to continue on under two men who murdered just as many people (if not more) than Jax did himself – does he really think that’s going to go well? From one end to another, “Papa’s Goods” is full of indulgent film making and this self-righteous attitude that Jax is doing the cool, “tough guy” thing by sacrificing himself, willfully ignoring the obvious facts that, as many characters have learned due to the mistakes of people before them, death is an escape, not a punishment.

So Jax lines up his trajectory into Not Vic Mackey’s front end, crows are everywhere, and the show gives us our last vision of Jax: happy, the wind in his hair, his arms raised and his hair flowing in the world’s least subtle Jesus pose, ecstatic to die as a failure, repeating the mistakes of his father two decades before. And after seven years and dozens of plot twists, Sons of Anarchy ends in the most predictable, lifeless way possible, going out with a victory lap it never earned, rather than the descent into hell its characters deserved (an opinion the show sometimes held, depending on what season you were watching), a limp, unsurprising, and thoroughly disappointing final chapter to a once-promising drama.