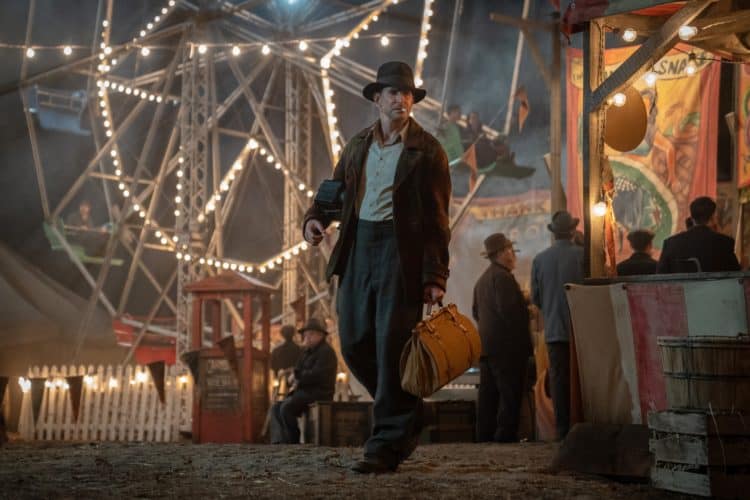 Nightmare Alley has been praised, it’s been looked at in a critical manner, but overall it feels as though this movie was hyped up in a way that might have created the kind of expectations that weren’t exactly met. Some folks might disagree and state that the movie was everything they expected, but after watching it all the way through, the movie was enjoyable enough, but it was also a bit different from what might have been expected. The story kicks off with Stanton Carlisle, played by Bradley Cooper, as he’s seen burning down a house after putting a body beneath the floorboards. That’s shifty enough for anyone to think that something is going on, but when he ends up becoming a carny, where no one is going to be looking for him, Stan proves to be a hard and innovative worker as he takes instruction from the man that runs the place, Clem, and also learns from the resident psychic, Zeena, and her husband Pete. He also takes a shine to Molly, another carnival worker that takes a liking to Stan.

After the accidental death of Pete, as Stan unwittingly gives him a bottle of wood alcohol instead of a bottle of liquor, which ends up killing Pete. Not long after, Stan and Molly leave the carnival and strike out on their own, as Stan has learned enough from Zeena and Pete about cold reading and coded language to develop his own psychic act. When he encounters Dr. Lilith Ritter he falls headfirst into a scam involving two of Ritter’s patients, who have deep pockets and a deep, abiding need for a psychic as one of them wants to contact their dead son, while the other wants to contact a dead lover. While the first man isn’t dangerous at all, the second proves that he has no qualms about harming anyone that he has to so that he can have his way.

Against Molly’s objections, Stan decides to take on the task of scamming both men with Ritter’s help, and he begins an affair with Ritter as well. When Molly finds out about the affair she leaves Stan but does come back for one final scam. when things take a turn for the worse, however, Stan ends up killing the man, and his bodyguard, before he and Molly flee for their lives. Molly ends up leaving Stan once again as she wants nothing to do with him any longer, while Stan makes his way to Ritter’s office to retrieve the money he earned from his psychic readings. What he finds is that Ritter was stealing his money and replacing the bundles with single dollar bills that were made to look like the wads of cash that Stan had been receiving. Upon realizing this, Stan is about to confront Ritter when she shoots him in the ear, wounding Stan but not killing him as she then calls for security. Stan does what he can to choke her with a telephone cord, but security shows up first and chases him off as he runs far enough to hop a train, where he hides behind several crates filled with chickens as the cops lose sight of him.

Needless to say, without any money or any place he can go back to, Stan ends up riding the rails for a while until one day he comes across another traveling circus, where he attempts to find works as a psychic once again. The operator of the carnival, obviously disgusted with Stan’s look and smell, nearly puts him out as he has no use for a psychic. Instead, he offers him a position as a geek, an attraction that’s used to pull people in by biting off the heads of live chickens. Ironically, this was one of the first attractions that Stan attended with Clem and one that he didn’t understand up until the last few moments of the movie. The rise and fall that Stan experiences during the movie are interesting enough since it shows his ascension from a man that watched his father die, and in fact facilitated his demise, to a man that has everything he could ever want. And then, in a twist, it shows him losing it all because it was never enough.

As tends to happen in the movies, however, enough is never enough as Stan seeks to prove that he’s smart enough and wily enough to outwit everyone he comes across. The problem is that Stan is insanely shortsighted as he allows himself to be taken in by his own avarice. Once he ends up believing his own hype he falls into it so heavily that he can no longer separate himself from the scam that he’s created. Once he does fall, he falls hard, and there’s no one to catch him, as he’s burned every bridge he once had. In terms of being entertaining, there are plenty of points in this movie that are easy to follow, but the movie doesn’t appear to live up to the hype.