Home
Entertainment
Comics
So, Marvel is Going to Create a Planet of the Apes Series? 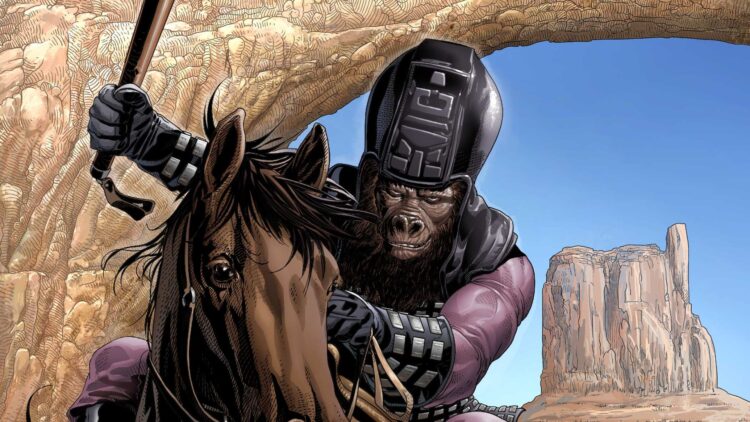 Before anyone gets too excited, Marvel will be taking Planet of the Apes back as it pertains to the comics, but it does sound as though Matt Reeves, who directed The Batman, will have something to do with a Planet of the Apes series. In the meantime, Marvel will be focusing on bringing this story back to the comics as of 2023, and to be certain, that could lead in a lot of different directions if it takes off. This franchise is one of those that has managed to be popular for a while before it was put on the shelf and then was brought out again to be presented to the public yet again, only to be put on the shelf once more before Andy Serkis’ version came about and created an origin that was far more acceptable than what Mark Wahlberg helped to create years before. When looked at as an actual story and not a live-action production, this story is ironic in a lot of ways but terrifying just as many since it does place humanity in front of a mirror to look at their own iniquities.

As a science fiction story, this is a great tale since it goes to such lengths to punt humans to the bottom of the pecking order when it comes to who is the most dominant species on earth. The implications of this have been theorized over and debated for years since the original movie came out, and the comic might certainly help that to pick up again. Or, it could simply go on to tell more stories about the world that has been created, since it’s not hard to think that there are many interesting tales that could be told throughout the course of this series and it’s also fun to think that some of them might be able to help shape the world a little more and give rise to new stories that could shed some light on the world itself and

When thinking about the many different stories that could be brought to bear on this world, one has to think of how it was shaped and how many different stories weren’t told in deference to the main story that was allowed to unfold. One also has to wonder which stories are going to be considered canon and which will be let go. There have been three separate versions that, with some clever writing, could be connected if someone was willing to find a link to use, but it’s far more likely that the comics will end up following just one story, and it’s very possible that it will be the original tale. It makes sense in a way given that the original story is what a lot of people have clung to over the years, though it is fair to say that the most recent version was gripping and did show how it could have brought about the original version. The arguments surrounding the overall idea of Planet of the Apes have been varied over the years as things have continued to revolve around the idea of either leaving it alone or pushing the idea forward.

What is interesting about this story, at least one thing, is that it can expand in a lot of ways and it can be fleshed out in a lot of different directions as the overall story has been kept fairly similar in each version since the apes taking over is the main idea and the downfall of humanity is placed on their own shoulders in a lot of ways since the hubris that humans possess in spades is what tends to bring the species down. Plus, the treatment of the apes is what helps this downfall to come along, and as the story moves along, it becomes obvious that mankind is quite simply too arrogant to realize that they have made mistakes and there might be a way to atone instead of risking open war. The whole idea of the Planet of the Apes is that humanity has lost its way and therefore has lost pretty much everything. The comics are no doubt going to dig into the story again to remind people what’s going on and what direction the story will be taking.

2023 sounds like a long way off yet, but it’s fair to say that those working on this story will be doing what they can to make sure that people will accept what they’re given and that things might end up taking on a direction that could see Planet of the Apes become a bigger story in the Marvel Universe. Who knows, maybe one of these days we’ll see Planet of the Apes become a big part of Disney+ and even an alternate universe that might be visited a time or two.