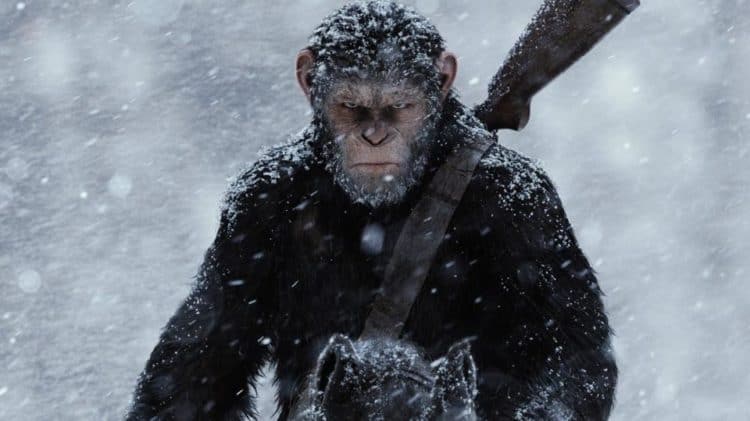 Ryan Scott of MovieWeb is likely right that we’ll see a new direction for the next Planet of the Apes franchise since Disney now owns it and is moving forward with the idea. It’s been a little while since we saw the CGI apes taking over and trying to survive, but it’s still a long ways from a hostile takeover that occurred in the original given that the apes are simply trying to survive and stay away from humans rather than rule them. If anything, the hubris of humanity has been the biggest impediment within the story as humans are shown as fearful, unwilling to cooperate, and only a few among them are willing to even try to understand how the apes are attempting to survive. It’s hard to know the whole truth when one is caught up in the storm that comes after the inciting incident, as is fairly normal in movies and in real life. Once the story is spun in one way or another those that come after have to eventually pick a side or get lost in the rush between the two major forces that seek to drive the tale. In this story there have been those that have tried to make peace between both species, but all too often this is destroyed since the lack of understanding or ability to sit and comprehend each other in a neutral manner tends to ruin any chance at reconciliation.

Added onto that is the fact that humans we do tend to be kind of destructive and do take for granted a world in which we believe ourselves to be among the first and most intelligent species around, even if science has proven at least some of that isn’t true. In the movie apes tend to be just as complicated as humans as there are those among them that want to take the offensive, just as there are those that simply want to live in peace and flourish. The ability to hate isn’t solely a human trait, but when seen in animals it tends to appear as more of a reaction than fear or lack of understanding. In other words, some of the apes throughout the last few movies have hated the humans because of their lack of respect and their desire to hurt them. When it comes to survival anyone is going to do as they must, and when it comes to nature humans are seen to be woefully inadequate when the scales are leveled. Caesar showed his people how to fight back and how to survive, and in doing so knocked humanity back quite a ways in the process, reminding us that for all our technological advances and ability to make war on others, there are only a few ways by which humanity can edge out the rest of the world when it comes to survival. We can take everyone with us for starters, as nuclear warfare to eliminate an enemy is an ability that might be on the table for a continuation of this franchise. Such a thing might not come to pass since it would wipe out a great many lives on the planet and likely take the story in a very different direction, but when it comes to fighting against creatures that are far stronger and much more capable in combat than human beings there are definite extremes that some people might look to.

Now that Caesar is gone though it’s going to be interesting to see where the movie picks up and who is going to assume the mantle of leadership. There are plenty of apes that are smart enough to figure out how to proceed, but Caesar was the first among them to really figure out how to keep them all alive, and he was the one that took command when they needed a leader. There are other apes that could take up the role, but it has yet to be seen just who could do the job and who would be the most even-tempered. But maybe that’s the trick. Maybe the next leader won’t be the type to state that apes and humans can live separate or together. Maybe the next leader will be the one that leads the charge against the remaining humans, deciding that it’s time to take the battle to their onetime oppressors and wipe them out entirely or at least to the point that they’re no longer under the illusion that they’re the strongest and most versatile species in the world. It could happen, especially given that humans seem to be on the decline within the last couple movies thanks to one disaster or another. However it turns out it’s going to need to be something good since fans of the movies have come to expect nothing less than the best. Anthony D’Alessandro of Deadline has a few other points to make.