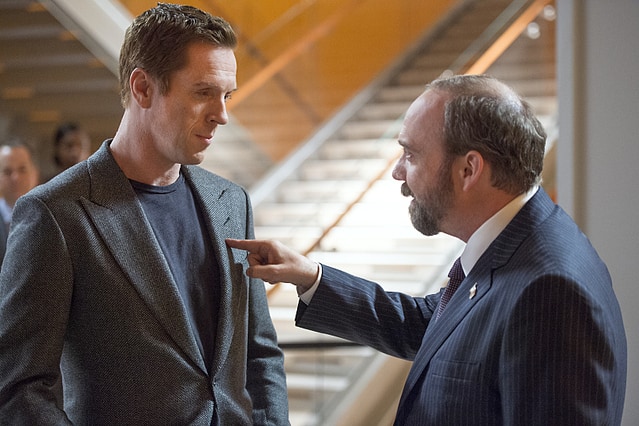 The front cover of a puzzle box is a picture of what the puzzle is supposed to be at completion. It’s a handy guide, too, as you fit the pieces together; you can reference your lower lefthand corner with its lower lefthand corner, making sure you’re on the right track.

Perhaps the best kind of puzzles are the ones depicting beautiful, soaring landscapes. Meadows and forests and lakes— all in bright, vivid colors that, had you snapped a photo of them in the wild, would frame. But when you put the puzzle together, it always lacks that same spark; that same life. It doesn’t feel the same. You run your hands over the surface and it’s bumpy, and irregular. You can see the seams.

Billions is helmed by Brian Koppelman, David Levien, and Andrew Ross Sorkin. All three of these men are accomplished within their fields; Rounders, the first movie that Koppelman and Levien penned, is one of my favorite films ever, and Sorkin (in addition to being a well-known New York Times columnist) wrote a nonfiction text on the Wall Street banking crisis, Too Big To Fail. Together, these three bring experience, expertise, and knowledge to the creation of this show.

All artists start off as mimics; they find The Sun Also Rises, or watch Star Wars, or listen to David Bowie, and they try their best to imitate what they love so much. There are no exceptions to this rule, nor does it prevent someone from making great, powerful art. As artists get better at their craft, they start to find their own voice. Perhaps they find Hemingway’s clipped prose too clipped, and add more flair. Perhaps they lose their taste for George Lucas’s obsessions with specific visuals. Point is, artists find their own voices. They stand on the shoulders of giants, sure, but they do so in their own shoes.

The problem with Billions is that it reads as if it was made by artists still in their learning phase. It feels as if they watched a lot of brilliant, inspiring television, and picked the pieces that made it great, and transplanted them into their own show. They took a charismatic villain, and made him complicated; they took one of the good guys, and gave him a dark secret; they took a female character and made her strong, etc, etc. This all sounds great, and it is, on paper. But while things are a part of nearly every great show, they do not guarantee a good show.

Billions feels like a paint-by-numbers, and it suffers for it. It tries too hard to make it prestige television. Honestly, it’s perfect for a network like SHOWTIME, which has a long, storied history of messing up good shows (Homeland keeping Brody past the first season, letting Weeds run until the second coming of Christ, whatever the hell Dexter was after season four, etc).

This problem is intertwined with the second biggest problem with the Billions pilot; it’s too much like a movie. We get so much backstory and character in the first hour of the show that it leaves no mystery. Malin Akerman plays Lara Axlerod, the wife of Damian Lewis’s Bobby Axlerod. There t’ss a scene in which a woman speaks out against Bobby for surviving the 9/11 attacks instead of her husband, in front of a room full of people, as Bobby is paying for the college tuition of every child in the room. Besides the fact that this is nonsensical (he’s paying for the tuition of every child in the room, there’s 60 people in the room who love Bobby, he’s the most powerful man in the state; I mean, come on) it gets even worse when Lara and this woman sit down outside the conference room. Lara, after comforting this women, goes into this long spiel about how she grew up lower-class and how tight her family is, and then threatens the woman if she doesn’t watch her mouth. When the woman asks if that was indeed a threat, Akerman’s Lara laughs, and says, “You’re f**king right I am. That’s how I grew up.”

That is not how people talk, for Christ’s sake. They don’t go into extended monologues about their lives. If they are going to threaten someone, they threaten them; they don’t take a full minute and a half to lay out backstory. This woman knows who Lara is, knows about her background (as she says, she “never judged”), so the only reason Lara is saying these things is for our benefit.

My question is: why? Why tell us now? You have an entire season of television to tell her story, or any other story. This is not a movie, where all of this needs to be setup early and quickly so that the rest of the story can be told. These people are the story! Lara Axlerod struggling to live in both an upper and lower case world is the story. Do we really need to have Bobby Axlerod broadcast his genius so nakedly when he saves his employees from making a bad trade? Why do we need to see him rescue the pizza parlor in this first episode?

These are all big, flashy brushstrokes that serve well in movies, where time is limited. There are better ways to show his intellect and his savvy, and also his kindness and goodness, then to shoot them up in the sky like a firework.

Chuck Rhoades has the same problem, but to a lesser degree. I can’t tell if that’s because Paul Giamatti is an actor without peer or just better writing, but his scenes actually crackle. He’s giving it his all in every scene, and he sells it, for the most part. But just like everyone else on this show, he gives these long, winding monologues describing who he is. I’d call it Shakesperean, but it’s not entertaining.

For example: Chuck’s father was brought in by the defense attorney of a man going to jail for a financial crime. This man is a family friend of Chuck’s, and the attorney hoped that with Chuck’s father there, he would could convince Chuck to give the man leniency. But it doesn’t, understandably; Chuck is enraged at the gesture, and gives no leniency. This is an interesting way to explore both character and world.

And it’s completely undercut by Giamiatti laying it all out for us in monologues. He talks about he’s not like his predecessors and how he loves his father but he’ll arrest him if he does this again (and also, by the way, manages to describe his father as someone both tough and someone who made his fortune fairly, in a clumsy bit of exposition). We are told (often by the characters themselves) that they are these things, instead of us being shown these things. I suppose one could argue that this is a way, perhaps, of subverting the characters later one; they may describe themselves as one way, but they are actually THIS way. That would be reasonable, if these characters every actions didn’t back up the monologues. No, it’s just a way for Billions to easily get character across as efficiently as possible. We definitely know who Chuck and Bobby and Lara and Wendy (introduced, also, by a monologue; Maggie Siff is the best thing about this show by million miles), but we didn’t learn it organically.

But it also, thematically, doesn’t tie into the rest of the show. Chuck is not the kind of man who acts interested in doing things that will cause him pain. Chuck is also not getting metaphorically pissed on, nor is he having cigarettes put out on his chest.

It’s a striking image, and it gives the impression that there is something more ahead. But ultimately, it’s just a bat signal; more character shorthand plastered in the sky. It screams out its intention and purpose, and then fades away, as if it was never there at all.

While Paul Giamatti soars, Billions struggles to find its footing in an uneven pilot episode.