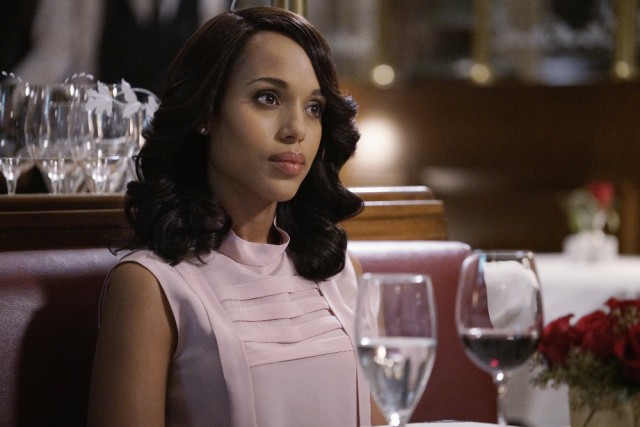 Following Fitz’s decision to kill the Brandon bill and his  public date with Olivia, the POTUS faces the music in this week’s Scandal. Not only is there public scrutiny, but inevitably, the Senate gathers to decide if the want to proceed with their plan to impeach the commander-in-chief. Since the vote and the result are both anonymous, Fitz needs to hire a lawyer and is instructed to refrain from discussing the fragile state of affairs with Olivia. Meanwhile, Mellie is forced to remove herself from the committee, due to actually being legally married to the man who is being investigated. For her part, Liv resolves to recruit Leo to rehab her damaged image.

When it comes to Fitz, once again, the man seems completely delirious and incapable of managing his expectations. It it inconceivable that a man with his power appears not to feel the heat coming; worse, he doesn’t anticipate that his actions, habitually reckless, keep fueling a domino effect that, at this point, should have ended his career. Maybe because he got to be so powerful he thinks he can survive a scandal of the magnitude of his affair, but no matter how you slice it, his reasoning is flawed at best.  Mellie is no different at this point. There was no way she could still be part of the committee. In fact, she shouldn’t have voted at all.

Moving on to Olivia, her plan to recalibrate the light shed on her is not a bad idea; however, as much as I love to hate Leo, this episode of Scandal failed to show how his spin was any different from anything the Gladiators have done in the past. Adding to that, the tactics put into motion were not surprising, effective, or particularly entertaining to watch. Grocery shopping? New clothing? None of that would ever make Liv more relatable or lovable after going on a public date with a married man.  Additionally, asking former beau, Senator Edison Davis, to vouch for her also fell short and felt like a device to have the heroine of the show shamed once again.

To make matters even more ridiculous, Liv decides to visit Jake for advice. So yes, let’s break this great idea down. Character-assassinated woman goes to the man who not so long ago ran in his boxers after her abductors, to discuss the mess she is in, for having an illicit relationship with the married man who started a war to save her. The scene also felt like a device to justify Olivia finding out that Jake is no longer alone. Moreover, I personally felt that having the two women from Ballard’s life barely interacting was a missed opportunity. The audience is intrigued about Elise (played by the amazing Mia Maestro), and this episode of Scandal didn’t give away anything about her, except that she followed Jake, who for some reason, is still in D.C.

Later on, Olivia does her own interview and gives a heartfelt speech about the price she and her loved ones are paying because she laid eyes on the most powerful man in the country. She bookends her words by stating that she wishes she and Fitz never met. It somehow works, and Liv seems to have regained her reputation. I fail to see how people were persuaded so easily, but I will go with it.

In the meantime, rookie Gladiator Marcus acts as a double agent by pretending to be helping the committee, thus he learns that the tape made during Olivia’s kidnapping has surfaced. That would be evidence enough to bury Fitz, who, to be fair, should be impeached and should never have started a war. Liv informs the POTUS, in a very steamy way, and the two decide that the only way to neutralize the threat is to make amends with Cyrus, who is the only person who can either save Fitz by saying he never saw the video, or destroy him by admitting he did.

Cyrus and Mellie are commiserating and sharing drinks, brownies, cheese, and whatnot, while sporting loungewear, when Fitz calls Cyrus and asks to meet him. Later on, when the two gather, the former chief of staff, once again, proclaims his love for the POTUS and reminds him of the work he’s done for him, which keeps getting creepier by the episode. However, when Fitz offers Cyrus a job–though not his former position–he declines. He is able to read the situation well and knows he has the upper hand and, therefore, pulls lists a series of demands. Fitz raises the bet when he, too, demonstrates how well he knows the man who was his right hand (and leg, and eyes, and ears…), offering an apology for letting him go and closing with “That seat on the couch is yours if you want it.” Cyrus wants the seat on the couch.

Scandal has been nothing short of a rollercoaster this season. Sadly, in this installment, that is not a good thing. The episode lacked, above all things, intrigue. There was practically no action, and a lot of expository dialogue. The Gladiators didn’t do much. The stakes couldn’t be higher, yet there was no sense of danger on any front. To add salt to the wound, every great development that started in last week’s “Dog-Whistle Politics” was neglected entirely. Jake’s mission, Mellie’s anger towards Cyrus, and Olivia’s resentment towards the bullies, for instance, seemed to be forgotten events that were suspended somewhere in this week’s Scandal.