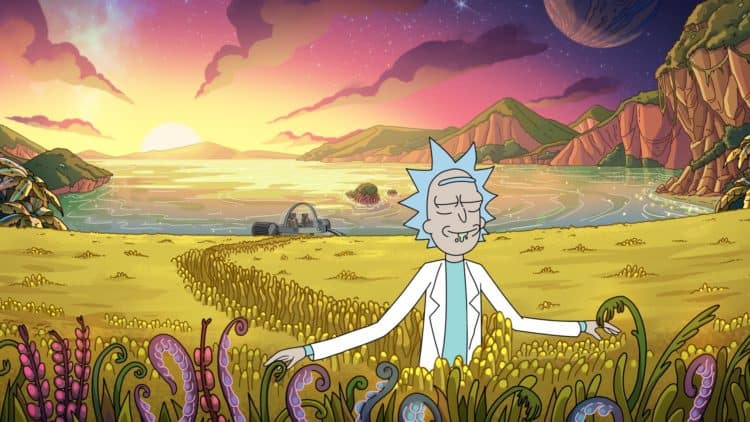 After Rick and Morty Season 4’s premiere (“Edge of Tomorty: Rick Die Rickpeat”), the standard for Season 4 was set high. With episode 2, “The Old Man and the Seat”, the series takes a hard left, introducing a Rick-only storyline about losing a friend, and a Jerry-Morty father-son storyline. So, let’s break down this episode! *Obviously there’s spoilers, duh.*

During a Smith family breakfast, it is revealed that Rick has an intern named ‘Glootie’. On his head is a stamped tattoo that reads ‘Do Not Develop My App’. Upon Jerry asking about the tattoo, Rick replies that it is for Jerry’s own safety; to stop him from developing an app with Glootie. Rick then stands from the table to head out, and Morty announces that Rick is a ‘shy-pooper’, so he has to retreat to a secret hideaway toilet in a dimension he created. Meanwhile, Jerry follows Glootie upstairs to find him photo-copying something. Intrigued, Jerry begins to question Glootie about his app. This ends with Jerry making a horrible bargain to develop Glootie’s app, and they become business partners.

Rick retreats to a beautiful and serene forest with a large waterfall and a porcelain throne on the edge of a mountain. He takes in the picturesque scene, sitting down and doing his business. As he begins to leave, he sees that a branch has been stepped on, which piques his curiosity. He takes the branch to his underground lab, trying to trace its origins. After looking through the history of his toilet, he finds that someone else has pooped here, and he’s on a warpath to find out who. Through multiple analyses, he traces the evidence back to a sandwich from another planet. He immediately goes to the sandwich shop, confronting the mob boss (who happens to be a giant fly) in the back of the deli. After some manipulation and blackmail, the fly gives up the identity of who ordered the sandwich. Rick must find the delivery bot who delivered the sandwich, and then he will be able to track down the toilet thief. Rick finds the delivery bot, nearly loses the memory chip required to find the toilet thief, and heads off to meet whoever pooped in his toilet. It turns out to be a middle-aged man from another planet, who really isn’t any harm to anyone. The man gives Rick a sob story about how his wife is dead, and how he is a shy-pooper, but it’s revealed that he was just trying to save his own skin and not be murdered by Rick. Rick then gives the man a warning that if he ever sees him again, he’ll kill the man.

Jerry and Glootie end up developing a dating app called ‘Lovefinderrz’, and it takes Earth by storm. It matches people with their highest compatible person, but this can happen once or twice a day. We see people spiraling into pandemonium as everyone is on the search for true love. Summer gets pulled into the app, going through 4 ‘soulmates’ in one week. Beth calls Jerry and tells him about the situation, and Jerry decides the app needs to be shut down. Glootie explains that he can’t do that, then Morty comes upstairs and demands he get rid of the app. Morty destroys all the computers in Glootie’s office, and threatens to kill Glootie if he doesn’t take the app down. Glootie explains that the app can only be deactivated on the mothership, so Morty insists he take the two of them to the mothership. Once aboard the mothership, Morty and Jerry are introduced to the ruler of Glootie’s people, who have mastered the art of partnership and monogamy. It’s revealed that the app was just a diversion, so that they could steal all of Earth’s water (as their home planet has no water left). Jerry and Morty get locked up on the mothership, but are soon visited by Glootie who frees them and promises to ruin the app. Back on Earth, we find out that Glootie has added an ad-wall to the app, and people begin to delete it off their phones. Finally, the episode ends with Rick stopping by the toilet thief’s place of work, to give him high fiber cookies (as he’s rigged the toilet with tech should the man ever return). The receptionist informs Rick that the man died a few days ago, and Rick is surprisingly heartfelt. The last moments of the episode are of Rick sitting alone on his toilet, while mocking holograms of himself (intended for the thief) tell him what a loser he is.

I absolutely loved this episode. It was a really new style of story for the series, and it pays off big-time. We get to see Rick feeling real remorse for the loss of a friend. He isn’t used to people around him dying (since he has 10 backup plans for any Smith family death). He seems guilty and remorseful, which is a first for Rick. This episode also explores the dynamic of Jerry and Morty, showing some of their similarities, and getting a few jabs in from Morty to Jerry. We haven’t really gotten to see those two together exclusively, especially not in harrowing situations. It also gives Morty the opportunity to be the hero and save the day (which he totally does). It shows how much he’s changing with Rick around. He’s more confident, assured, and aggressive. And I can’t wait to see more of it!

This is a great episode overall, but there are a few pacing issues. Some segments feel like they’re too long, or made too important to the story. Obviously, the Rick and Morty team do an exceptional writing job, but this episode just felt slower than usual. That pace, I believe, was to accommodate the emotional development of the characters and show off these new dynamics and situations.