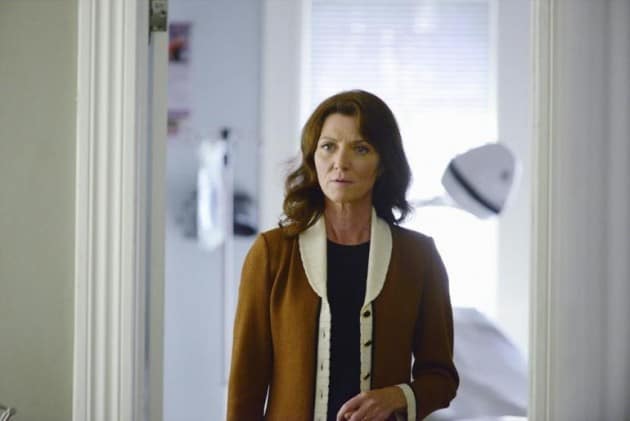 To be honest, when I sat down to write this review I thought maybe I dreamed the events of last night’s Resurrection.  Nope, the writers really delivered some shocking revelations in this penultimate episode.

A trance suddenly strikes all the Returned as they congregate outside of Rachael’s apartment where she’s awoken with contractions.  Elaine once joked about wise men coming to look for Rachael and the baby, which funnily enough foreshadowed this zombie-like procession that Fred just as quickly snapped them out of by firing his gun into the air.

Preacher James didn’t appear to be among the crowd that gathered but his whereabouts were soon shown.  He was praying (shirtless to demonstrate the freaky tree marking on his back) and received visions of this baby’s impending birth.  Rachael’s baby is evil.  In fact, James goes so far as to later quote the Book of Revelations in reference to the coming of the Anti-Christ.  Woah!  Obviously with only one episode left possibly forever, we needed to get closer to some answers.  I wasn’t expecting such a big move though.

In order to work on fulfilling God’s will to get rid of this great evil, Preacher James needs Margaret’s help.  Of course she’s willingly staying in the government holding facility with other unclaimed Returned people.  James’ plan to bust her (and everyone else) out of there was a clever one, I have to say.  By poisoning everyone with laced communion and wine, he knew they would be free when they came back almost immediately.  More importantly, James pleads his case with Margaret in the hopes that she is on his side.  He even mentioned angels and demons, which is a theory I’ve had all season long.  So far it appears that at least some of the Returned get a bad feeling about the baby.  It remains to be seen if Margaret is truly on the good side of all this because I had her pegged as a demon all along.

Another super important development was the latest research estimates that Angela was working on.  We knew that she’s able to loosely predict when and where Returned people will pop up, but we didn’t know that this is a problem exclusive only to Arcadia for decades now.  Even crazier was the fact that she’s predicting millions of Returned will begin to appear all over the world!  If this is all because of the one baby, then maybe the end of the world really is at stake.  Who saw that coming?

Were you surprised by this episode?  How do you hope to see next week’s finale wrap everything up?