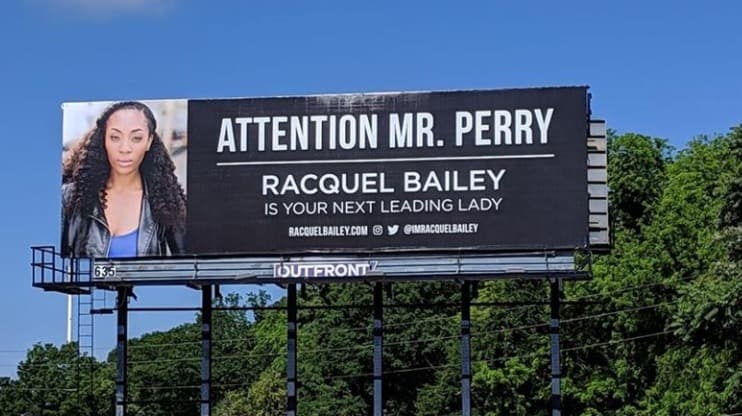 If you don’t know anything about Racquel Bailey don’t feel too bad since she’s a hopeful actress that’s really trying to get into the business in a big way and has been told that she has what it takes…..so long as she stops with the humongous billboards. The actress reportedly spent a couple months worth of rent money to pay for the billboards that have caught the kind of attention that could be good or bad and seems to forget that there is something called a FREE audition. Now I don’t know much about auditioning since I don’t plan on becoming an actor any time soon, but like anything else you’ve got to earn your way in, and this seems as though she’s trying something that might earn her the wrong kind of attention, basically the kind that’s brief and followed by a very long, very meaningful silence that lasts for years at a time.

Her are a few things to know about Racquel.

10. She doesn’t lack for confidence, that’s for certain.

That’s admirable really, she knows what she wants and she’s going for it full-bore, but at the same time she’s doing so in a way that doesn’t reek of confidence when all is said and done, but desperation instead. This isn’t exactly the way you go about promoting yourself unless you already happen to be a famous actor.

9. Her social media following is, well, not impressive, but it’s there.

She does have followers and it’s not like she has only a few, but at this point it would seem that her account really needs to build if she’s going to keep on pushing towards her dream and retain that level of confidence that seems to hang around her like a cloud. If nothing else she needs to start working the channels that are proven to produce instead of those that are gaining the kind of attention she doesn’t need.

8. She’s been doing classical theater for a lot of her life apparently.

Racquel is no stranger to the stage and has no trouble getting up in front of people since it means more exposure and taking another step closer to her final goal, but breaking out of this part of her life seems to be something she’s only done now and again. She’s still hopeful though.

7. Her attempts to reach Tyler Perry haven’t worked thus far it sounds like.

Let me amend that and say that seven years ago when she did this same thing her efforts didn’t gain any response. But this newest billboard did get Tyler Perry to respond, but not exactly in the way she expected as Lexi Vollero from Entertainment Weekly has reported.

6. The people that have seen this are rooting for her it would seem.

Friends, family, those in the local area that have noticed her attempts, are no doubt rooting for her to get noticed and become someone big so that she can attain her dreams. A few of them might want to say that they know someone famous, but it would appear that more of them just want her to succeed, which is understandable.

5. Her goal is to win an Academy award one day.

That’s a pretty lofty goal to be chasing since even some of the most noted actors in Hollywood haven’t been able to do such a thing in their careers, and she has a long way to go yet to get there. It’s true that dreams are what make life worth living, but now and again some seem a little more up in the clouds than others.

4. She did start her own theater company a few years back.

One thing that might seem kind of odd is that while Racquel does have big goals and expectations for herself she definitely sees fit to keep things on an even keel around her general vicinity since she doesn’t stop doing what she loves. In other words she doesn’t abandon her passion to chase after a dream that might not happen.

3. To avoid any controversy you’d have to watch her acting for yourself and be the judge.

She’s not the worst actress in the world but it does seem as though she might be best suited for a comedy or something similar simply because that seems to be where her delivery is best, when she’s either trying to be funny or is simply humorous without trying.

2. She wants to stand out, but the billboard is kind of the wrong way to do that.

It’s true that directors see dozens of head shots a day if not hundreds, but there are easier and much better ways to stand out than plastering your face on a billboard in the hopes that just one director will see it.

1. Tyler Perry has even asked her to stop doing this.

He acknowledged her and then told her that there are better ways to spend her money, like paying the rent. He’s not lying after all.

She did get an audition out of this, but it’s not really known how it went.