Just like it was hard to follow the Twin Peaks inspired episode with the police academy episode, it was near impossible for them to follow the inspired Christmas/dream episode. Compared to 5.14 this was obviously a step back; but in this strong run of episodes, thankfully, it was still another solid episode of Psych. 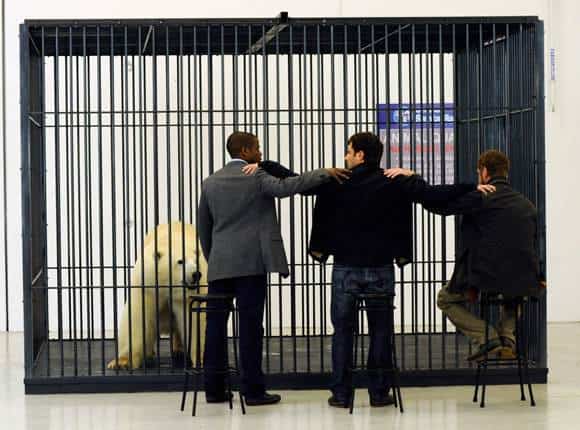 When a polar bear trainer is found dead in the habitat at a local zoo, Shawn and Gus aim to prove that the bear was innocent, and make sure it doesn’t end up euthanized for a crime it didn’t commit. Meanwhile, Lassiter’s little sister Lauren (April Bowlby) is in town to film a documentary on her crime fighting brother. Of course Lauren is ridiculously beautiful considering her blood relation to Carlton, and of course that means Gus starts putting the moves on, and of course that means Shawn is going to be horrified. Just when it looks like Gus is about to strike gold, he has a terrifying vision of Lauren-as-Lassiter, which definitely ruins the moment. Poor Gus.

But the key to the story is the Lassiter/Lauren relationship. Lauren has viewed her big brother as an almost mythic creature, something from legend, but watching him flap his way around the case while Shawn and Gus do all the fun, action-based police work just ends up making Lassie look pathetic. A younger, more immature Shawn might’ve taken all of the kudos and delighted in making Lassie look even worse when it comes to his final monologue, but it looks like the lessons he learned in 5.14 have carried over. Shawn takes a step back and lets Lassie take the credit, helping restore his reputation in front of his sister. Well played, Shawn. Well played.

It definitely wasn’t the funniest Psych episode we’ve seen this season, with some of the jokes being a bit stretched out, and the case not really hitting the heights that we’ve seen lately, but it was a nice little character-centric tale for Lassiter, and it felt wise to take it easy before we inevitably get a huge finale next week. B+