Last week the show went north of the border, but this week we’re back in Santa Barbara as Shaun, Gus, Jules and Lassiter take on the case of the carnival ghost, in an episode obviously inspired by (and full of references to) Scooby Doo. 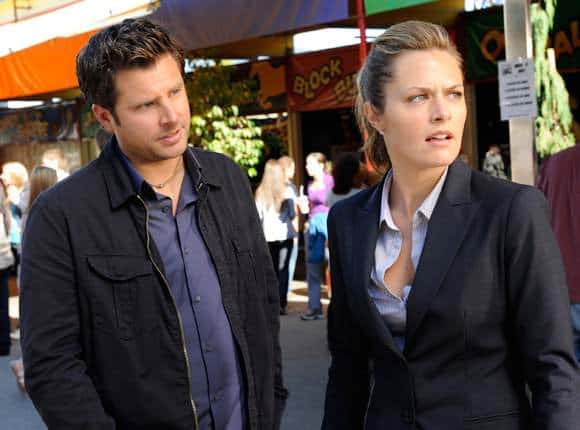 Shaun and Jules discuss keeping their secret from the world

In my 5.10 review I commented on how the episode felt so packed with story that it didn’t have as much room to breathe as usual, meaning we lost out on a lot of Psych‘s usual banter and in-jokes — well 5.11 came back firing on all cylinders, as we got the perfect mix of great Shaun and Gus squabbling and twisty-turny plot hijinks. Psych is often at its best when it just lets the leads go crazy and argue their way around a case, and “In Plain Fright” certainly fit the bill.

Those fans who were worried that Shaun and Jules finally getting together would change the DNA of the show can also rest easy. While the B-plot of the episode dealt with Shaun trying to deal with keeping their relationship secret from his best buddy, it never felt like it was derailing the show or compromising what we love about it. In the end Gus’ reaction was exactly like most of ours — yeah, so what, they’re together. It’s been coming for 5 years. Let’s get on with our lives. Perfect.

Cherry on the cake? The triumphant return of former Asian assistant Ken, who has become his own little running joke. The poor guy never got a reference from Shaun for a job at IBM, and has now lost his job at the carnival. Here’s hoping he pops up again throughout the season.

Definitely a very funny episode, one of the best this season. 9 fist bumps out of 10

What did you think of “In Plain Fright”? Discuss the episode on our forums.