With Nestor Carbonell and Curt Smith guest starring this week, will we Shout praises of this episode or will all be Lost in the guest stars?

The guest star’s this week were played excellent. Curt Smith playing Curt Smith? Who knew he would work in that character. Granted I don’t know much about Tears for Fears, apart from the song Shout, but I really loved Curt in the episode. He was hilarious with his back and forth between Declan and his awkwardness towards Shawn was down right perfect. After all Shawn was confessing his love towards Curt. Now Nestor Carbonell really impressed me this episode. As Declan Rand, yeah even I think it’s a funny name, Carbonell stole the scenes he was in. Being that he was playing a new and improved Shawn, Declan was still a fresh character that will do well as a recurring character. On a side note, I loved the remark about Carbonell’s eyes. I guess it’s not just Lost fans who notice that Carbonell has the appearance of wearing guy-liner.

I have to say that I never expected this story to be this good and well written. When I saw that it was about donor patients dying, I figured it would just be someone on the donor list killing them. Well I was half right but, I did not expect the suprise twist the writers threw in to confuse almost every watcher. Throw in some great 80’s and 90’s pop culture references, a new yet not as funny Shawn-esque Declan, and some great music/dialogue from Curt Smith, and this story was not only bearable but, great to re-watch again and again. 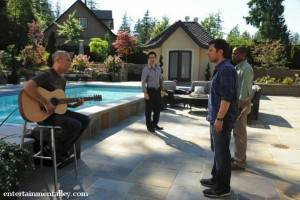 Gus this week was not given a nickname. I would have been upset but that was overshadowed this week as we viewers were finally given some addition to the overall season story-arc. It’s been awhile since Shawn has discussed feelings for Juliet but, I can see he has been harboring his feelings of possible love for some time. I like that Shawn became somewhat vulnerable when competing against Declan and I thought he was going to spill his secret. Alas, Declan made himself the hero thus sustaining his recurring role as what I believe will be Juliet’s boyfriend, much to the disgust of Shawn.

This episode was all around great from start to finish. I really hope next weeks summer finale can continue the momentum from this week. A+