Will the summer finale live up to the expectations we as Psych fans want, or will the comedy in this Bourne-esque episode be too undercover?

The amount of guest stars this week was the magic number four. First off Nestor Carbonell returns as Decland Rand. Although there was not much time on camera this time, Carbonell did well in his part. Next, Psych reunited Carbonell with another Lost star. Jon Gries (Roger Linus on Lost) played Strabinsky, a spy who removed himself from “the grid. I have to say Gries fell into this part quite well. His perfect timing of jokes to Shawn were nice and it was nice to see Shawn play off the jokes nicely. The next guest was Franka Potente. You may know her as Marie from The Bourne movies. Oddly enough, she is playing a spy named Nadia. Her scenes were ok but most of the time I cringed at her dialogue. This part should have seriously gone to someone else. Finally the last guest star is C. Thomas Howell (Ponyboy from The Outsiders). Howell played Driggs, a CIA officer tracking Nadia. This character was fitted for Howell I believe. But, enough about characters. 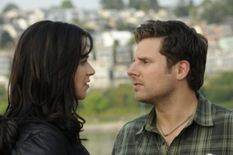 This episode was well worth the wait. The main story for this episode was inspired by The Bourn series. I have to say that the writers did a good job of writing a spy esque episode to end the summer season. The episode had many great moments (including one with Shawn and Juliet, but more on that later). However, the character of Nadia really brought the story and the episode down. The scene that pushed me off the edge was between her and Shawn in the park. This one scene, although necessary, had me cringing the entire time. For those who have yet to watch the episode, you may wish to remove that scene from your brain.

Horrible acting aside, the scene after Nadia leaves the park is where the OMG moment of the episode begins (I say it begins here because the moment actually travels into the final scene of the episode). You may have noticed that I would always rant about the writers not including the Shawn/Juliet love story. Well the story really came to a head this week. Before I go on I have to add
SPOILER WARNING: FROM HERE ON OUT
With that being said, I am so excited that Shawn and Juliet are finally moving their relationship up a notch. Granted Declan is throwing a wrench in the plan but I expect that to be worked out soon. Shawn kicked off the love triangle by professing to Gus, while Juliet listen through a radio with Shawn unaware he was still wired, that he loved Juliet. I have to commend Maggie Lawson on her acting in this moment. She played her emotions well. To add to this moment, Juliet took the biggest leap of faith at the end of the episode by kissing Shawn. This is what I believe is the beginning of a possible relationship between Shawn and Juliet (once Declan is out of the picture).

With Shawn and Juliet finally getting closer to a relationship, this episode had a lot of potential. Unfortunately, Nadia (Franka Potente) had to bring the episode down covertly. Let’s hope this is the last of Nadia the spy. B-