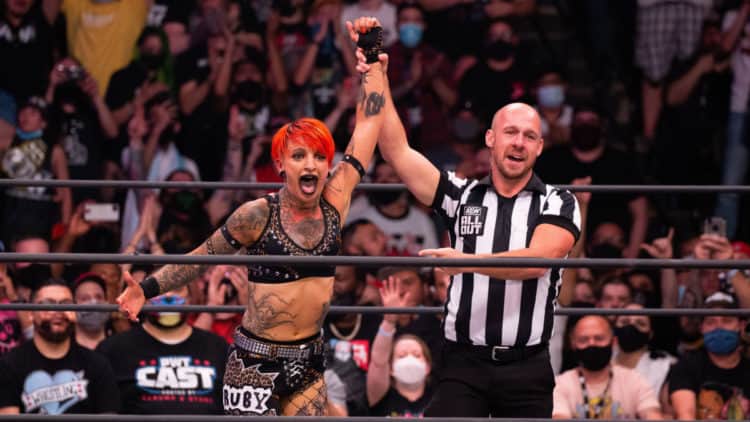 On September 5th, AEW held arguably one of their best pay-per-views to date, All Out, which featured the in-ring return of former WWE Champion CM Punk, the debut of Minoru Suzuki (more so a one-off), Ruby Soho, Adam Cole, and Bryan Danielson. It was a hot show capped off with an amazing moment. Since the company’s debut in 2019, All Elite Wrestling has constantly received high marks for its exciting storylines, fantastic matches, and incredible depth of its roster. However, there are a few issues that prevent AEW from truly being the best promotion in the world. Of course, financially, WWE is the top promotion, and that likely won’t end any time soon. However, one can argue that New Japan Pro-Wrestling is the best promotion going on at the moment. Granted, the Japanese promotion doesn’t have the hype that AEW has, but there’s no denying the level of skill and craft that goes into their stories and matches. If AEW can fix these problems then the promotion could easily hold the claim of the best wrestling in the world.

The Lack Of Writers

I know, I know, one of AEW’s main things is the creative freedom that the company has over WWE. There’s nothing wrong with AEW having talents script their own feuds, but not everyone has a creative mind like Kenny Omega or Chris Jericho. There have been too many times when a writer could’ve been used to fix or enhance feuds. As great as Shaquille O’Neal’s match against Cody and Red Velvet was, the entire build-up was bad. The face or heel dynamic was never clear and the story behind it was weak. The whole Pinnacle vs. The Inner Circle rivalry felt like a rush job. These guys came out fast with the blood and guts match. Chris Jericho was tossed off the top of the cage in what appeared to be a serious injury angle. Yet, less than two weeks later the entire crew makes their triumphant return.

Imagine if the blood and guts match took place at Double or Nothing. That way, Jericho and his crew could’ve sold their “injuries” for a month or two while The Pinnacle dominates AEW Dynamite. This would’ve helped The Pinnacle could’ve off as a huge threat, that way the rematch at All Out would’ve had higher stakes and a less predictable outcome. Let’s not forget the failure of a strong women’s feud and how disjointed the All Out card felt. The build to Kris Statlander vs. Britt Baker lacked any type of substance to drive the feud until All Out. Christian Cage vs. Kenny Omega failed to be compelling because of how out of the blue it felt for the former WWE superstar to challenge for the AEW World title.  The same thing can be said about The Young Bucks and The Lucha Bros, Paul Wight/QT Marshall, Miro/Eddie, and Moxley/Kojima.

Khan and company don’t need 40 writers; however, hiring a small group can do wonders for the creative team. Yes, I do understand that Mr. Khan mainly writes the show himself, but having a good team can catch most of the problems for rivalries, actually craft long-term stories, and relieve the pressure off of wrestlers who aren’t creatively gifted when it comes to storytelling. As long as they stay away from over-scripting their product like WWE then a small creative team can really bump up the AEW product.

This has been a problem that’s plagued the company for years. No, AEW doesn’t have the high caliber of in-talent like WWE; however, the biggest issue is the lack of compelling characters up and down the women’s roster. Other than Britt Baker and Thunder Rosa, no one really stands out from the pact because AEW has failed to spotlight their diverse group of talents. Characters are extremely important. That’s mainly the reason Britt Baker became one of the hottest talents on the roster because the company took the time to craft her heel persona. AEW needs to start highlighting more of their women. Get over different personalities and showcase more than just one feud on Dynamite or Rampage. With talents such as Thunder Rosa, Riho, Nyla Rose, Penelope Ford, Serena Deeb, and Jade Cargill on your roster, there’s no reason why this company can’t have multiple hot rivalries that don’t involve the women’s title. AEW is by no means a perfect company. However, that statement can easily be said about WWE, New Japan, Impact, or any other wrestling promotion out there. That said, should All Elite Wrestling address the issues that hold them back then there’s no doubt that they’ll be the best wrestling company in the world.