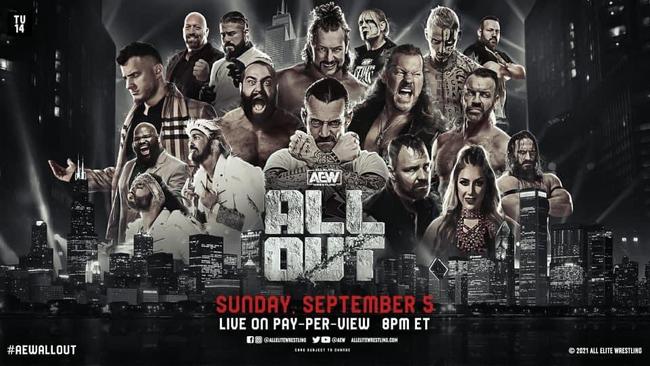 AEW’s latest PPV All Out took place last Sunday, with the event featuring a 5-star classic match, CM Punk’s first match in over seven and a half years, as well as three ex-WWE stars debuting for the company. The event was one that I never wanted to end, with so many exciting moments taking place throughout, and it reminded me why I became a wrestling fan back in 1998 during the Attitude Era. For almost 20 years, the WWE stood on top of the mountain as the biggest wrestling company in the world, with no true competition in the west. While there are plenty of great wrestling promotions in the United States, such as Ring Of Honor and Impact, they are much smaller than the WWE, and apart from a brief period of Impact receiving high ratings, no company has went toe to toe with the global juggernaut, that is until AEW launched in 2019.

All Elite Wrestling was formed following the success of the independent 2018 PPV titled “All In”. The event was held by Cody Rhodes, Kenny Omega, and The Young Bucks, and was done to prove that fans wanted to see good professional wrestling, rather than WWE’s Sports Entertainment, as well as to test the fan reaction to a potential new promotion. All In sold out in a matter of minutes, with over 10,000 tickets sold, which indicated to the group that they may be onto something.

A few months later All Elite Wrestling officially launched, with the four wrestlers taking Executive roles in the company, along with the financial backing of billionaire Tony Kahn. Later in 2019, the company began airing a weekly TV show titled Dynamite on TNT, the first time a wrestling show had aired on TNT since the WWE purchased WCW in 2001. Dynamite went toe to toe with WWE’s third brand NXT and proved to be enough competition that WWE moved the date that NXT would air as it was clear that WWE couldn’t simply muscle out the competition. While AEW isn’t competition for WWE’s main shows Raw and Smackdown, it has regularly seen over a million viewers tune in to watch the new alternative.

AEW features a roster of many upcoming stars, as well as ex-WWE Superstars such as Rusev, Dean Ambrose, Christian, and Chris Jericho, although the first three now go under the names Miro, Jon Moxley, and Christian Cage. Their latest PPV, All Out, continued to show the growth of the company, as well as how the blend of old and new wrestlers is helping to elevate AEW to the next level. A major selling point of the event was the return of CM Punk, who had left the WWE in 2014 and hadn’t been seen in a wrestling ring since.

The general consensus was that Punk would never wrestle again, after having left the company on bad terms. His return has helped add another layer of legitimacy to AEW, with more casual fans now taking notice as a popular star of the last decade has now joined the roster, especially as he has stated in the past he had no desire to wrestle again. This move will certainly bring in more weekly viewers.

The card for All Out featured a blend of larger named competitors from the likes of WWE, as well as more homegrown talent, with them coming together to put on a spectacle. The highlight of the event was without a doubt The Young Bucks Vs Lucha Bros in a Steel Cage match for the AEW Tag Team Championships. It could be argued that this match was one of the best cage matches we’ve seen in wrestling as a whole since Bret Hart Vs Owen Hart at Summerslam 1994.

Despite the fact it was expected that Lucha Bros would win the titles in the match, there was still plenty of moments that had viewers questioning whether this would be the case. With both teams being high-flying style competitors, the match featured plenty of high-risk spots, including a dive from the top of the cage. The match also got incredibly violent too, with Penta bleeding heavily in the match, as well as Matt Jackson using a sneaker with the sole covered in thumbtacks. It was a match that none of us wanted to end.

The selling point of the event was certainly CM Punk Vs Darby Allin, with the match being Punk’s first match since January 2014. While it was evident that his cardio still needs some work, which is understandable due to the length of time he has spent out of the ring, it was a very good match and as good as expected. CM Punk is also signed to a full-time deal, meaning we will get to see plenty more of CM Punk in the coming months. Punk also hinted during the media scrum that we could see him work with Sting in the future.

All Out saw four debuts in total, with three being ex-WWE competitors. Ruby Soho, formerly known as Ruby Riot, made her debut during the women’s Battle Royale, winning the match to earn a shot at the AEW Women’s Championship. But, the biggest debuts of the night were Adam Cole and Bryan Danielson, known as Daniel Bryan in WWE, and they happened minutes apart from each other.

Following the conclusion of Kenny Omega Vs Christian Cage, The Elite took out Christian and Jurassic Express. Adam Cole made an appearance and looked set to be taking on his former Elite teammates, only to turn Heel and attack Jungle Boy. Adam Cole was a member of The Elite is New Japan Pro Wrestling and Ring Of Honor prior to his move to WWE, now he looks set to continue where he left off with Omega and The Young Bucks by his side.

To even the odds, Bryan Danielson made his debut minutes later, which came as a huge surprise to fans. It was expected that both Cole and Danielson would be jumping ship to AEW, but nothing was officially announced. But now it looks like Bryan Danielson will be jumping straight into a main event feud with The Elite. This last month has been one of the craziest that we’ve seen in AEW, with CM Punk, Ruby Soho, Adam Cole, and Bryan Danielson all making their debut, joining an already stacked roster that includes Chris Jericho, Jon Moxley, Kenny Omega, Cody Rhodes, and Darby Allin. The future has never looked brighter for the new promotion.

Despite us all knowing that wrestling is scripted, like any good movie, it allows us to suspend our disbelief and believe it is real for that moment. In recent years we have seen the quality of WWE really go downhill, with millions of fans completely tuning out of the company. I stopped being a regular viewer in 2019, but my interest began declining from around 2014. Right now, I only keep up with WWE and watch what I need to for my job, but it is largely a very unenjoyable experience.

AEW, especially over the last month, has reminded me why I fell in love with wrestling as an 8-year-old child. I watched CM Punk debut at 3 am in the UK and woke up the next day still excited about what had happened and for the first time in a long time I was excited to watch wrestling again. Then All Out was an event I never wanted to end. It feels like we’re preparing for another “Monday Night War” style era in wrestling, with fans now having a viable alternative to WWE. This is only the beginning for AEW and the future is bright for the company, and all of us are going to win from this.