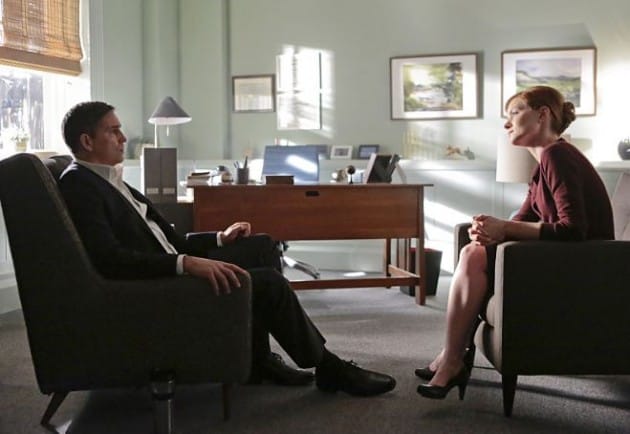 The two things that Person Of Interest has always been and forever will be about are privacy versus safety and whether or not the ends justify the means. Tonight we revisited the second. This was a smart choice, because wow, are we all going down the rabbit hole on this particular topic. I spent a big portion of my review last episode discussing whether Samaritan truly was the bad guy in this scenario, and I think that Team Machine was starting to consider those things as well; the kneecapping thing is a running joke, but they do what they do for a reason, and to see them teeter so close to the edge has been exhilarating. And, to be frank, it’s also reasonable.

Why shouldn’t they allow Shane Edwards to do what he does? He puts bad people who slipped through the cracks in jail. He’s basically a one man version of what they do already. Fusco and Reese, always the macho men, have no qualms with what he’s doing.

Only Harold has a complaint. Harold Finch is a fascinating character because he is both problem and solution to the problems they are going through. If he doesn’t build The Machine, Samaritan doesn’t exist. If he doesn’t build The Machine, Nathan would be alive, he’d be married to Grace, and Reese… well, Reese would probably be dead by now. Fusco would be a bad cop, Root would be a murderous psychopath, and Carter would still be Carter. He is both the savior and the destroyer of everyone around him. He, and he alone, has the power to change the world, and for a long time, he used it the wrong way. He tried to murder Alicia Corwin. He built an AI powerful enough to rule the world by itself. He got several charges killed trying to find a man like Reese.

Because of all of those things, Harold has been there and done that, all before. He has sacrificed his humanity in the name of protecting it, and in the end, he put a glass ceiling over everyone on Earth. Harold knows the end of the road is also the beginning. So when he speaks, his words have weight. Real, meaningful, experienced, practical weight. There is no way to know whether Morris actually killed Edwards’ wife; the evidence is thin and circumstantial in the rosiest of light. Edwards can frame Morris and put him in jail and die for his cause, and have accomplished nothing. Harold can blow up Alicia Corwin and have accomplished nothing.

“Life [is] infinitely more complicated than that.”

That is the only truth Person Of Interest can traffic in. The ends may justify the means, and sometimes they don’t. Privacy is great, until it isn’t. The essential truth of what this show is (and, frankly, the essential truth of what it is to be alive) is that things are always a swirling mass of gray. Harold is the only member of the group that traffics in shades and textures; Reese and Fusco and Carter and Root and Shaw do not. He is their center, their grounding force; without him, they are no better than Samaritan. They are no better than the evil the face, because they are willing to always let the ends justify the means. They need a reminder of what they’re actually doing out there, and why; Harold is that reminder.

– My only complaint with this episode is that Shane Edwards got off scot-free. A little too neat for my taste.

– Also, good rule of thumb: if you have dialogue like “strayed from the path,” make sure you give it to Michael Emerson. Otherwise, dump it in the trash.

– Very contained episode this week, but a good one. Always nice to take a break from the mythology.

– AMY ACKER IS THE BEST AND I KNOW THIS BECAUSE I WISHED SHE WAS IN THE EPISODE.