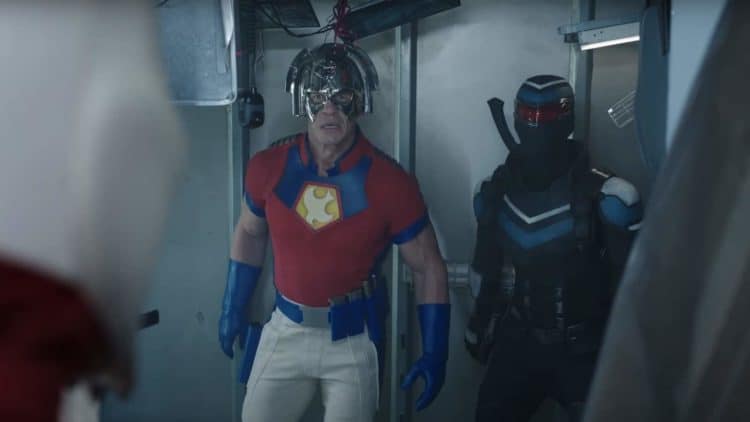 There’s a lot to unpack in this episode, and the music is just one aspect of it that’s been firing on all cylinders at this time, since Peacemaker’s choice of tunes has helped to galvanize the main points of the show, not to mention that the tracks have been threaded through the anti-hero’s life in a way that has shaped who he became throughout the years up until this point. Spoilers are coming, just to make readers aware. But moving on from that point, it wasn’t hard to think that Auggie, aka White Dragon, would end up seeking out his son to finally ‘fix his mistake’. The odd thing about this is that the audience was given over to believing that Chris was ultimately responsible for the death of his brother, Keith when they were just kids. The truth is that they were pitted against one another in a human cockfight that was run by their father, meaning that the responsibility lay on his head, and no one else’s. The shot to the head that Chris delivered to Keith was a bit hard to believe when it not only dropped Keith by had him foaming at the mouth. But the impact it had on Chris’s life is more than obvious as the beginning of the episode sees Peacemaker reliving the moment once again.

With the events of the previous episode still sending shockwaves through the team, it’s become obvious that Leota is ready to cut and run since she’s not at all ready for any of this, but Harcourt isn’t ready to let her off the hook right away, even when Murn reveals that he knew about Leota being Amanda Waller’s daughter. To say that Murn had just about everything scouted out would have been accurate had his own people, the butterflies, not staged an all-out coup that would enlist the local police force and a prison full of criminals that are now tasked with taking out Peacemaker and his entire group. On top of that, Peacemaker’s father, the White Dragon, can track his son’s helmets and has no trouble finding him as Peacemaker, Vigilante, and Economos were on their way to find the cow that serves as the supply of the gunk that the butterflies feed on.

The battle that took place between the trio and the White Dragon’s bunch of racist skinheads was a bit strange since Auggie was so fully intent on killing his son that he missed a few things, such as how crazy Vigilante really is, how protective Eagly is, and how Economos has been shown to come through in a clutch situation thus far. The getaway scenes were fairly comical as Eagly apparently doesn’t like Economos much, as was evidenced by the several sharp jabs he delivered to the man’s butt cheeks. But even better was the fact that while Peacemaker was getting beaten down, and Vigilante was about to be taken out, Economos came in blasting, decimating White Dragon’s group as Peacemaker then confronted his father, whose armor systems were already compromised by Vigilante, who, as the fans should recall, pointed out the gaps in White Dragon’s armor that could be exploited. You’ve got to love foreshadowing sometimes.

One could almost believe that Peacemaker was going to beat his father down but not kill him, since it’s already been seen in the season that Auggie has a serious hold over his son, no matter how badly he treats him. But to his credit, Peacemaker did end his old man’s life with a single shot, though it’s not hard to imagine why he would be crying at the end, as it was his old man, no matter how much he might have hated him. As the story keeps moving forward, Peacemaker has shown time and again a stunning level of complexity that’s tough to think about when it comes to a character that was little more than a joke in Suicide Squad. This kind of makes one think of what might happen if other characters from the movie were given their own shows, though it’s fair to say that only Bloodsport and Ratcatcher 2 would be up for such a project since Harley Quinn has already been given her own movie.

Another surprise was the loss of Murn, as the contact he was using, who is now a butterfly, knew their safe house, meaning that nowhere was bound to be safe. Telling Harcourt and Leota to get moving, he sacrificed himself to slow his kind down and paid for it with his life. Some might be a little emotional about the way Murn went out, and it’s even fair to see that some of the butterflies weren’t too happy that one of their own squished Murn without remorse, but the final shot of the prize at the end, the ‘cow’ that the butterflies were used to produce their food source, makes one believe that the group, now led by Harcourt, have their work cut out for them. Next Thursday can’t come soon enough.