Home
Television
Banshee
Banshee Season 3 Episode 6 Review: “We Were All Someone Else Yesterday” 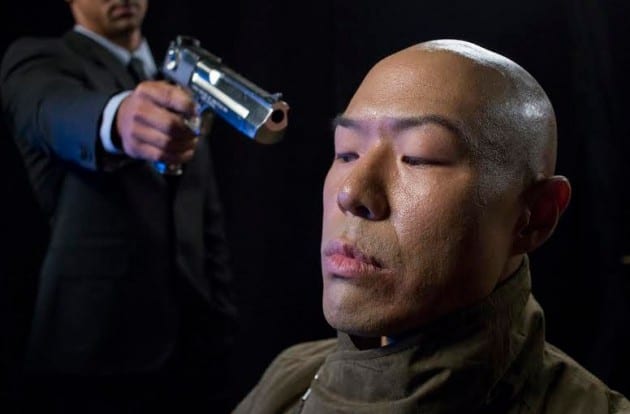 Banshee‘s most central (and also, most insignificant) mystery has always been a cogent metaphor for the show as a whole: Banshee is about a town torn between different identities, filled with people facing the same challenge, trying to cling to some notion of self in a world of chaos and randomness. It’s a show about the balance between the good and bad within oneself, how channeling the former can unfortunately lead to the latter (and vice versa); and as an enigma to the world around him, the man known as Lucas Hood embodies this existential battle every character in Banshee, PA comes face to face with every day. In the wake of a death close to home, “We Were All Someone Else Yesterday” is a blurry-eyed look in a bloodstained mirror for the characters of Banshee, a quietly poetic and moving hour led by a number of stellar performances.

The framing device of “We Were All Someone Else Yesterday” is a gut-wrenching one; while sitting in Sugar’s bar, Hood thinks about the day he came to Banshee, and what he might’ve done differently. What would’ve happened if the real Lucas Hood lived that night? What if nobody died, no lies were told, and not-Hood took that ride from Job he had called for?

These are the questions of a tortured soul; and as the episode slowly extrapolates to include other characters in Banshee in this personal moment of crisis, “We Were All Someone Else Yesterday” begins to use Siobhan’s death in an unexpected way. There’s anger behind a lot of what happens in this episode – Deva’s frustrations with her parents, Hood’s general irritation and disregard for others, Rebecca being embarrassed by her uncle – but a lot of this conflict is inner conflict pouring outward, stages of grief being projected onto others around the town. Of course, Hood’s attempts to deal with this are a lot more dramatic and short-term, but what makes “We Were” so strong thematically is how it conveys each character’s journey coming to a crisis point almost simultaneously, right down to minor characters like Aimee and Billy Raven (whose few seconds on screen brilliantly spoke to his emotional state at Siobhan’s funeral).

And the one character who thinks he knows what he’s doing, and what he believes in – Chayton – grows more and more delusional with each step, his war against the uniforms turning into a war against any uniform, when he tries to kill Aimee, even though she really had no intentions of shooting him, just ending the man hunt peacefully. His war has become so personal, it’s lost any sense of being an actual ’cause’; he’s alone running through the woods and away from Hood and the FBI. Though he may not recognize it, he’s become the monster many others are trying to reconcile with this season on Banshee, people who watch themselves say words and do things that almost feel alien to them (“she knew what she was getting into when she put on that uniform”… it doesn’t get any more delusional than that, folks). What distinguishes Chayton from the rest of the Banshee cast – like Rebecca, who thinks she has a lot more knowledge and influence than she actually has – is how they often find themselves resisting this identity (or struggling to embrace it whole-heartedly, as much as they desire it); which may or may not be a good thing, seeing as how embracing one’s true self (or what they perceive it to be) seems to get a lot of people killed (in Hood and Proctor’s case), or turns you into someone so isolated, they lose perspective on what actually matters (Kai’s father, Chayton).

Banshee pieces all this together so effortlessly, it gives it time to push things forward, even as it casts a heavy shadow over the time for a period of reflection. There’s a quote in the episode that addresses the episode’s title (“… and we’ll all be someone else tomorrow,” spoken by Emily to Proctor) and the fleeting nature of identity, something that is more malleable than we try to think it is. That disconnect is what leads to those feeling lost – and as “We Were All Someone Yesterday” draws to a close, it continues to push that dissonance on every single character, leading to one of the more introspective, poetic hours of Banshee.