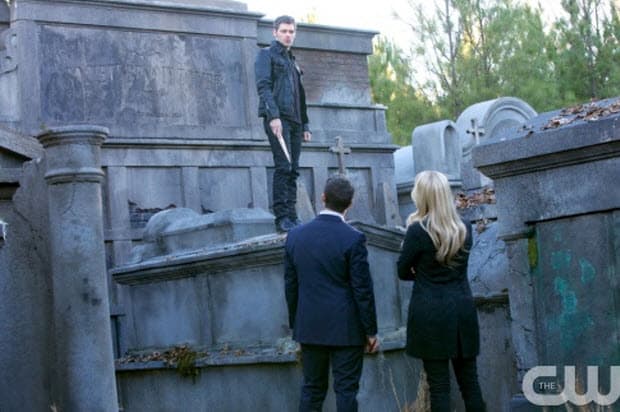 On first viewing (and yes, I had to watch this episode twice), this was simply another heartbreaking episode of The Originals.  Immediately after the east coast airing, the shocking news broke that this served as one actor’s last episode as a series regular.  I still don’t fully understand why, but Claire Holt has officially exited the series as of last night.  That just makes Rebekah’s final scenes even more poignant and depressing!

We left the Mikaelson siblings all trapped in the cemetery under a spell by Celeste.  Why that spell didn’t break the second Celeste died, I still don’t understand.  Anyway, Klaus has his white oak stake in hand, ready to kill his little sister once and for all.  He’s holding Rebekah on trial for her grievous betrayal against him centuries ago.  She defends herself, and with the aid of flashbacks, we see even more of their upbringing with their father Mikael.  Elijah reveals yet another secret to Klaus that Rebekah once attempted to kill their father while he was sleeping in the hopes of saving Klaus from even more abuse by him.  Elijah stopped Rebekah at the time, but should he have?  Probably not, given where Mikael’s abusive behavior has gotten them all today.

Rebekah admits that Klaus’ behavior in meddling in her love life so harshly definitely drove her to summon Mikael back to New Orleans all those years ago.  She wanted to be rid of her “bastard brother” and with that ultimate insult from his most beloved sibling, Klaus lunges at her with the deadly white oak stake.  Elijah’s quick to intervene and for a moment he has control of the situation.  He mistakenly lets his guard down, throwing the stake away from him and Klaus seizes this opportunity to get payback on his brother by turning Papa Tunde’s magic-infused blade into Elijah.  Think that sounds bad?  Minutes later Klaus is staking Rebekah with the only weapon that can kill an Original.  I couldn’t believe it, but luckily he wasn’t aiming for her heart.

This led to one of two very important scenes between Klaus and Rebekah.  Their family is beyond needing therapy, they really just need to wipe the slate clean and start fresh.  Rebekah put a dark spin on their old family motto when she said, “we are the definition of cursed.  Always and forever.”  If that didn’t have you tearing up just yet, wait until Klaus and Rebekah’s final scene together.  Even Klaus was crying as he essentially gave Rebekah the freedom she’s always wanted.  It’ll be interesting to see if he uses his new revelation that maybe Mikael was just continuing a cycle of bad parenting that he received.  With his baby on the way, that’s as good a chance as Klaus will ever get to being able to start fresh.  I’d like to think he won’t be a vicious father, nor will he treat his child as a bastard.

With Klaus’ blessing, Rebekah is finally getting the chance to live her life the way she’s always wanted.  She begins making her rounds of goodbyes, including Marcel.  Their love is epic, and though it was once forbidden, they’re still suffering the consequences.  Rebekah doesn’t expect Marcel to leave with her, and he understandably isn’t giving up on his home of New Orleans without a fight after Elijah banishes him.

If you watched the episode as it aired live, you were probably expecting that these goodbyes wouldn’t actually mean much because Rebekah is a main character after all.  She’s one of the three remaining Originals, so she’ll only be gone for three or four episodes, right?  As I said earlier, when you watch the last twenty minutes again you’ll start to cry even harder because these goodbyes serve as Claire Holt’s farewell to the show.

At least Rebekah was left alive (and more importantly, happy) so that leaves the door open for future guest starring stints.  We’ve all heard the expression that absence makes the heart grow fonder, but I don’t think it’s possible for fans of this show to love Claire/Rebekah anymore!  She often served as the heart of this show and The Vampire Diaries, a great contrast between her two brothers.  The writing for Rebekah the last few episodes has been outstanding, plus Claire put in some of her best work yet in those torture scenes.  Needless to say, Claire and Rebekah will be greatly missed!

I can’t help but wonder how the series will fare now that it’s down to only two Originals.  I sincerely hope the dynamic of the show doesn’t change, but even Klaus himself admitted that their family is more like a “volatile mix of ingredients”.  Elijah is sticking around, probably for Hayley and the baby’s sake, but I really hope that Rebekah’s absence doesn’t cheapen the show by focusing on silly love triangles any more than it already has.

What do you think of the surprising news of Claire’s departure?