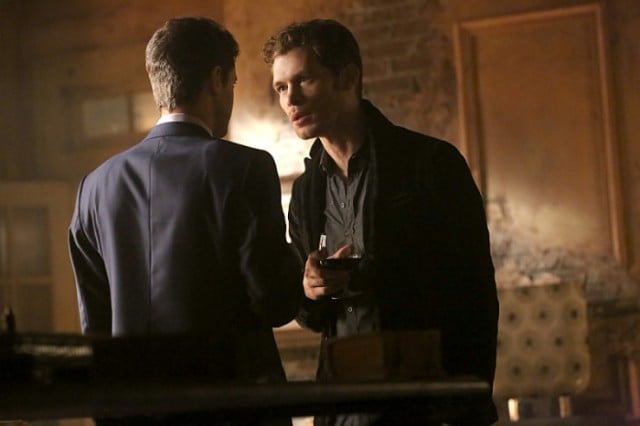 Thanksgiving is generally a happy holiday when families gather and enjoy each other’s company.  By that loose definition, it certainly does not sound like a holiday we’d see on The Originals but that made it all the more special.

Elijah’s the one to come up with the idea to divide and conquer all the troublesome sires by inviting them over for dinner.  This could never have been a normal family holiday, especially now that Aurora is the only one who knows Rebekah’s location.  Technically, though, she doesn’t even know.  Two sealed envelopes with the coordinates to her coffin at the bottom of the ocean ensure both Aurora and Tristan will live to see another day.  Lucien seems to be the odd man out of this supposed little threesome.  He wasn’t expecting Aurora’s love for her brother to trump that of any concern for him, so he needs to prove himself to Klaus.  Right now Lucien may be safe in trusting that his loyalty to Klaus is proven by handing over the medallion.  One wrong move, and he’ll be done.

Lucien doesn’t even have leverage over Klaus with Cami anymore.  She outsmarted her vampire nanny who was instructed to kill her if Lucien didn’t return by nightfall but didn’t get past the elevator before running into Aurora.  At dinner, all Aurora kept hearing was Cami’s name.  It’s been insinuated that Aurora’s a bit of a kook and has a reputation of being mentally unstable.  Meeting her first love’s current crush is all the ammunition Aurora needs to take advantage of this situation.  Something tells me she won’t care so much about returning Rebekah for her brother’s life if that means Klaus has moved on.  Basically there’s potential for a very dangerous crossover between The Originals and Crazy Ex-Girlfriend here, don’t you agree?

Hayley’s home life with Jackson is rocky at best.  She’s too quick to jump into action with the Mikaelsons whenever they need help, even if that means going against her husband’s wishes.  In her defense, Hayley owes everything to the Mikaelsons.  They took her in as family, and she should not be ashamed to want to help find Rebekah.  I also understand where Jackson is coming from, since Hayley missed out on what looked like a good Thanksgiving spread with her daughter and husband.  They’re just in a tricky spot because whether they like it or not, they’re all family.

Davina remains on the backburner as she’s sought after by Marcel to protect and prevent her from helping the Strix activate the medallion that could be used against the Mikaelsons.  Little Miss Independent forces Vincent to expose her hand in the witch murders, leading to her losing her title as regent and being shunned from the witch community.  She won’t have access to the ancestors anymore, but I’m assuming she’s left with her powers at least.  If I were her, I would take this as a sign and be grateful.  The stress of becoming a leader so young with such powerful magic was not healthy for her.  Nothing is ever that clear cut though.  The Strix might still see her as useful and try to recruit her.  If and when that happens, she’ll have no other option but to take them up on an offer to attack the Mikaelsons.

What did you think of this episode of The Originals?