Home
Television
Once Upon a Time
Once Upon A Time Review: Zelena is from “Where Bluebirds Fly” 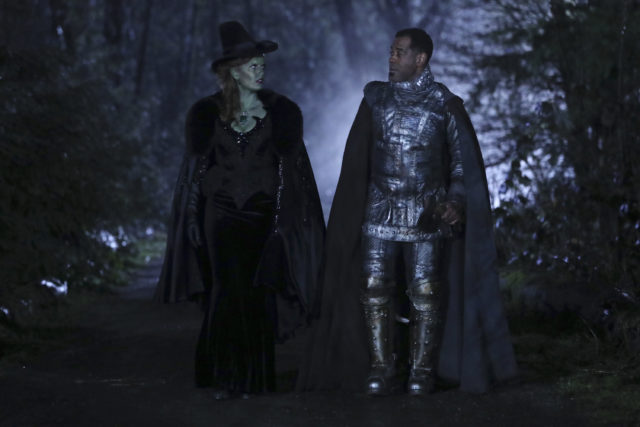 There is a sense of finality to the most recent episodes of Once Upon A Time. They’ve felt lately as though they’re wrapping things up, at least with several plot threads that have been scattered about throughout the last six seasons. As rumors swirl about whether there will be another season, and which characters will be involved in a possible seventh season, this felt very much like a final chapter to Zelena’s story. Of course, there’s always more in Storybrooke. What do I know?

This week on Once Upon A Time: The Charmings dive full boar into wedding planning for Emma and Hook, hoping it will take their minds off the final battle. Henry continues to look for a way to translate his gibberish and help Emma. The Black Fairy threatens Baby Robin, so Zelena goes after her. Zelena makes a great sacrifice to help stop the Black Fairy. Rumplestiltskin looks for a way to wake the Blue Fairy. In the flashbacks, Zelena helps the Tin Man look for a heart before he becomes completely tin.

This episode was very focused on Zelena, and that’s not a bad thing at all. I’ve always liked exploring Oz in this universe. I actually was kind of hoping they would try an Oz spin-off one day. The story about the Tin Man (and briefly, the cowardly lion) was interesting and served the Zelena character well. It was good to revisit the green makeup again. Sure, I was hoping for her to separate from the Wicked Witch a la Regina and the EQ, but either way this was good to see.

What was really compelling about Zelena’s journey in this episode in particular was how the showrunners seemed to have nailed down the missing pieces and corrected them. Even though Zelena has come a long way since being the show’s primary villain for a half season or so, she was still struggling with the same insecurities and issues that she had when she started on the show. “Where Bluebirds Fly” worked to identify and then address those issues. Rebecca Mader masterfully worked Zelena through her mommy issues, her inferiority complex, and finally pushed her through to doing the right thing at great personal cost (giving up her magic). It was well-acted and cathartic, and I was happy with it.

I appreciated the other plots, but this was a Zelena episode that included everyone else. Mader’s performance dominated the others. I think that, in part, this episode was crafted to kinda-sorta include the other characters. Zelena without her magic doesn’t have a tremendous future on such a supernatural show, so I think this is largely a farewell or swan song for her. The rumors for the possible cast changes in a possible 7th season likely don’t include her. However, if this was the end for her on the show, it was a great showcase and a strong character episode.

Overall, I was impressed with this as a character episode. Zelena dominated it, but I believe that was the goal. Anyway, I’m not upset about it. I thoroughly enjoyed this character study, and it makes me look forward to the final battle all the more.

Once Upon A Time Season 6 Episode 18 Review: "Where Bluebirds Fly"

Zelena is threatened by the Black Fairy, so she takes matters into her own hands on this week’s compelling Once Upon A Time.