Home
Television
Once Upon a Time
Once Upon A Time Review: Several Characters Return Marked On “Page 23” 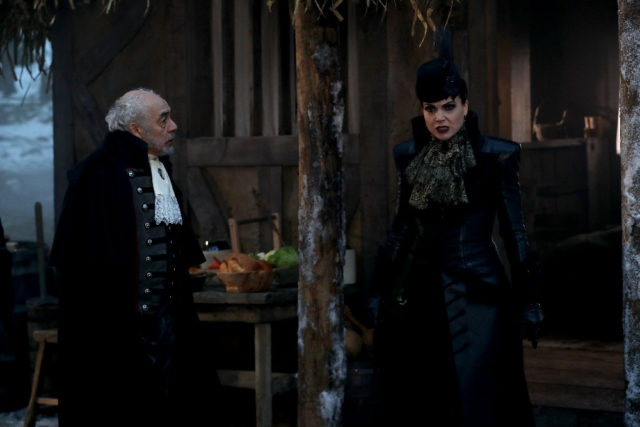 Think about how impossible it must be to act alongside yourself. More and more common in present day are actors playing dual roles, and in Once Upon A Time those supernatural situations arise more frequently than you’d think. Facing off against oneself was a theme throughout this episode. Though some of it was physical and some of it was emotional, “Page 23” used several returning characters to help some of the main characters battle their most powerful enemies: themselves.

This week on Once Upon A Time: Captain Hook seeks Captain Nemo’s advice, but doesn’t take it in time to not screw things up with Emma. Regina faces off against the Evil Queen once again, but chooses a non-violent path. Henry, as the author, is able to assist in resolving the Evil Queen situation. In the flashbacks, Regina’s father seeks to help her find her true love.

When you see three returning characters in the first few scenes of a new Once episode, you’re expecting a little more exposition and a little less of a character focused episode. But what actually happened in this episode was marvelous. They resolved the Evil Queen plot, and were able to do so without bloodshed. Instead, they fulfilled the Regina/Robin prophecy in an unexpected way, and kept Regina moving down her redemptive path. I will be disappointed to lose out on the Regina versus Regina stories, but the way that this episode became a milestone for Regina’s character, and wrapped a ton of plot threads all at the same time was marvelous.

Then, there’s the Hook story. As much as it frustrates me that Hook wouldn’t just come clean, especially after Captain Nemo said “come clean” and “ask for forgiveness”, I was still impressed with the arc. First, it welcomed back Nemo who was a strong character when he first appeared in the “Land of Untold Stories” plot. Perhaps he and Hook will assemble some “extraordinary gentlemen” to get them back to Storybrooke now that they’re gone (Hey, I can dream can’t I?). I was impressed with Hook’s arc not because of how handled that mess, but that he decided he needed to go back to Emma. Now his biggest obstacle will be actually doing so.

I always love to see returning characters, even when for a brief moment or short scene. This week they welcomed back not only Captain Nemo, but Tony Perez’s Henry and Rose McIver’s Tinker Bell. I find it pretty likely that they were only able to steal Rose McIver from iZombie‘s set for an hour or two (much like David Anders before her), which is why her appearance was short. Still, she played an important role in the Regina story and it was good to have her back for the conclusion. I always appreciate seeing the Evil Queen alongside Henry Prime (why haven’t we always called him this?) because he represents her humanity.

Overall, I found this episode to be a phenomenal character study for our two redeemed villains. Lana Parilla and Colin O’Donoghue brought their A-game, and were supplemented by several returning characters, which is always a treat. This was easily the best episode that Once Upon A Time has done this season.

Regina battles the Evil Queen for a final time, while Hook battles his conscience on this week’s phenomenal Once Upon A Time.