Home
Television
Once Upon a Time
Once Upon A Time Review: Is Gideon Still “Mother’s Little Helper”? 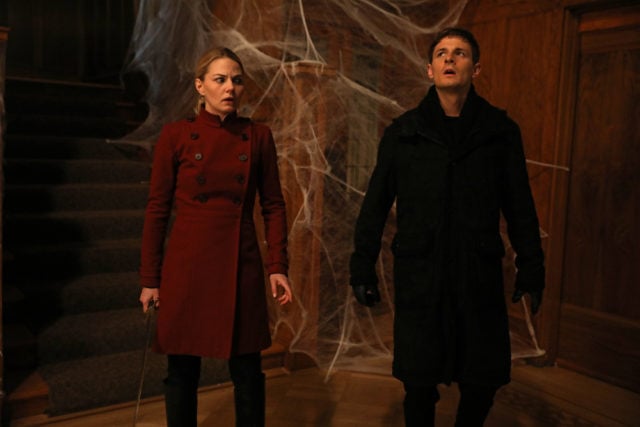 This week’s Once Upon A Time had a simple premise. Several of our favorite characters got in bed with their arch-enemies to get what they wanted or needed. In this episode’s case, I’m starting to think that the enemy you know is much better than the one you don’t. Season 6 has been a parade of returning characters, as well as a deeper study into our heroes and what separates them from their greatest foes. At the very least, it was an interesting saga.

This week on Once Upon A Time: Emma and Gideon team up so that Gideon can defeat the Black Fairy, and Emma can get Hook back in Storybrooke. Not one to lie down and wait, Hook makes a deal with Blackbeard to get back to Storybrooke, but gets re-routed. Henry has a weird spell of written symbols, so he and Regina consult the previous author, Isaac. In the flashbacks, the story of Gideon and the Black Fairy over the last 28 years is told.

This may have been the most intriguing flashback story told all season, simply because they told a story we didn’t already know. Gideon and the Black Fairy, though we knew the gist of what happened, to this point have largely been a mystery. But, a few twists and turns led me to become much more sympathetic to Gideon, even though he’s been painted as a villain to this point. I’m still not totally convinced that he is innocent in everything (spoilers, he did try to kill Emma more than once), but finding out that the Black Fairy holds his heart is a game changer. Of course, I probably could have guessed that she, and not Gideon, was the villain who would need to be defeated. She’s the only one powerful enough to unite the likes of Emma, Rumplestiltskin, and perhaps eventually Gideon.

The rest of those betrayal and “strange bedfellows” stories ended pretty much how I thought they would. Hook and Emma were both betrayed (though like I mentioned earlier, Gideon’s reason was valid enough), and Henry got simply an ominous warning. The most important part of all these happenings, though, is that they remind the show of their roots. Season 6 has been a revolving door for returning characters, and Blackbeard and Isaac were just the latest installments. Not only that, but Hook and Blackbeard landed accidentally in Neverland, which comes with even more connections to the past. Though Pan is dead, I’m still interested to see how things play out for Hook there.

Overall I’m impressed. This felt more like an episode to set up some payoffs down the line, but it was still a fun, interesting watch.

Once Upon A Time Season 6 Episode 16 Review: "Mother's Little Helper"

Emma, Hook, and Henry team up with their enemies to solve larger problems on this week’s interesting Once Upon A Time.