Home
Television
Once Upon a Time
Once Upon A Time Review: “Ruby Slippers”, Ruby Falls 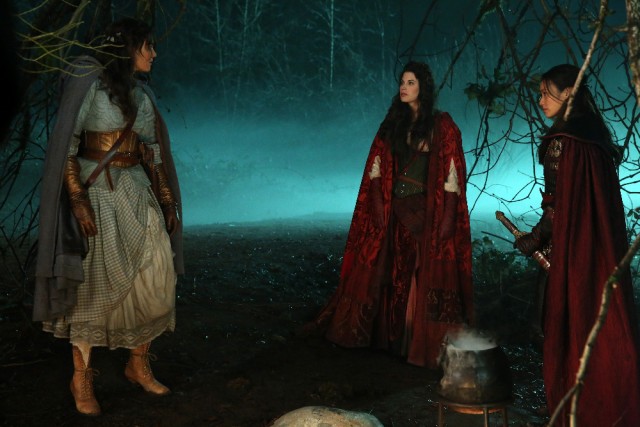 As Once Upon A Time inches closer to the end of its fifth season, it’s only natural that the plot continues to thicken. Though I thought it was strange, at first, that characters were going to fly in for an episode all about them this close to the end of the season. But, by the end of the episode, all of the stories tied together nicely.

This week on Once Upon A Time: After Ruby lands in the underworld, she looks for any information she can to find and save Dorothy back in Oz. The flashbacks tell the story of Mulan, Ruby, and Dorothy’s first encounter in Oz, in which they attempt to evade Zelena. The gang helps Ruby find Aunt Em, but Hades gets there first. Snow White and Charming miss their son, so Hook helps them come up with a plan to help young Neal get one of his parents back. Belle looks to Zelena for assistance in protecting her baby from Hades.

As you can see, this week’s episode was chocked to the brim with plot. At first, I thought it was a really inappropriate time to bring Ruby into the fold and tell a “Wayward Daughters” story (pardon the Supernatural reference). However, seeing Jamie Chung and Meghan Ory is always a delight, and to my surprise, it turned out much better than I thought it would. First of all, the addition of Teri Reeves to that crew was great. There ought to be three in that crew, and Dorothy would make a formidable one. She’s a warrior. I would love to see these three get their own show. I also really, REALLY appreciated how it tied in with everything else. Auntie Em getting melted and tossed in the river wasn’t so great, but Dorothy under the sleeping curse, using that same idea with Belle, and tying all of it to Zelena’s struggle as a parent and with Hades. It really fit together well.

There was also that little matter of Ruby and Dorothy finding themselves in a “true love” relationship. I thought everything about that story was well-executed and smart. Though, it was pretty obvious where they were going with it long before they got there. Overall, I would like to have spent a little more time on them before it culminated in the relationship, but hey, maybe we can get a spin-off for that? ABC, are you listening? Rather than introducing more characters like Once Upon A Time in Wonderland did, I would be much more supportive of characters from the flagship show moving to their own show in this type of scenario. This is the only thing that would stick in my mind after the show, so surely I’m not the first person to think this up.

Aside from the spin-off talk, I was proud of the way David and Hook collaborated on a sacrifice for Snow. Hook’s really become part of the family, and I’m appreciative of the slow-brewing bromance developing between he and David. That was a small part of the story, and a sweet one.

Lastly, Belle seeking Zelena’s help was brilliant. When Belle first arrived in the Underworld, I was SO TIRED of the back and forth between Belle and Rumple. I’m proud to report, however, that this plot has completely renewed my interest in that relationship.

I quite enjoyed this episode. It was certainly plot heavy, but it paid off in several ways. Not the least of which, to give some of my favorite supporting players some screen time. Always good to see Ruby and Mulan, and hopefully that means there will be more Dorothy now too! This was a masterfully told story, and the heavy plot was handled gracefully.

Once Upon A Time Season 5 Episode 18 Review: "Ruby Slippers"

Ruby arrives in the Underworld, seeking a way to help Dorothy, in this week’s excellent Once Upon A Time.