Home
Television
The Office
The Office 7.05 “The Sting” Review 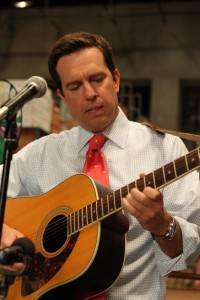 I’ve been waiting for this episode of The Office since it was announced that Timothy Olyphant would be guest-starring. Everyone knows that Olyphant is an amazing dramatic actor (he was robbed of an Emmy nomination for his current role as Raylan Givens in Justified), but he’s also a hilarious comedic actor. He’s been brilliant in guest spots on My Name Is Earl and Samantha Who? (not to mention a great little film called High Life that made me hurt myself laughing), so I was excited to see him at Dunder Mifflin.

Olyphant plays Danny, a rival who “steals more clients from Dunder Mifflin than anyone,” according to Dwight, who adds that Danny slept with Pam. Jim confronts her with this information, and she says they didn’t, but does reveal that they went on a few dates four years ago. Off Jim’s annoyed reaction, she has the perfect comeback: “You do know I have a kid with you, right?”

It’s up to Jim, Dwight and Michael to keep Danny from poaching more of their clients. Dwight decides to set up a sting operation, creating a fake office so the team can watch Danny in action and steal his secrets. They enlist Meredith to play the representative of the false company, but she’d rather flirt (not that I can blame her, as he is ridiculously good-looking and effortlessly charming). The boys try to send in Oscar and Ryan to break it up, but Meredith refuses to detach herself from Danny and Michael is forced to blow up the whole operation. This being Michael, he is insane enough to try and turn this mishap into a recruiting opportunity, much to everyone else’s horror.

When Danny actually accepts said job offer, his integration into the Dunder Mifflin workplace is another matter entirely. Jim still isn’t comfortable with the fact that Pam had a past relationship with him, and Dwight uses that to start a completely random tirade that dissipates a minute later. The best reaction, however, belongs to Kelly – two words I can’t even print. Danny is entirely bewildered by his new coworkers, and given that Tim Olyphant is only here for two episodes, one imagines they’ll run him off in epic form somehow next week.

Meanwhile, Andy feels threatened by the musical accomplishments of a college classmate, and decides to start a band with Darryl and Kevin. Episodes of any show where someone creates a band are usually hilarious (does anyone else fondly remember the Monk ep that introduced us to The Randy Disher Project?) and this is no exception. Andy writes a song from the point of view of a little girl, yet insists on singing it himself. The three guys do eventually manage to gel after a little nudge from Darryl, however, and we end the episode with them actually putting together a coherent song. I wonder how long that’ll last.

“The Sting” is probably one of my favorite recent episodes of The Office. Much like with Idris Elba’s appearances in Season 5, dropping an actor not necessarily known for comedic chops into Dunder Mifflin to play the straight man is classic, and Tim Olyphant delivers a great performance that should raise his profile in the comedy genre. The episode is also a fine one for John Krasinski, Rainn Wilson and Ed Helms, all of whom have laugh-out-loud moments. Perhaps the best compliment I can give is that once I finished this episode, I couldn’t wait to see the next one.

For my fellow Tim Olyphant fans, here’s a brief video interview about his appearance courtesy of NBC:

If you haven’t seen it yet, you can also check out the first trailer for Season 2 of Justified here. Also stay tuned tomorrow for my advance review of the Halloween episode, “Costume Contest.”