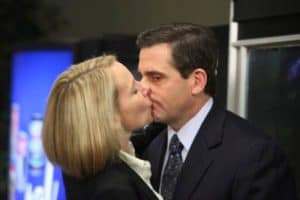 Which is why “PDA” was one of the funnier Office episodes in recent memory. All of us can relate to both sides. And when you toss in a plethora of sex jokes on top if it, you not only get to second base, you tend to go all the way.

I love that Kevin (Brian Baumgartner) continues to get some of the best lines (if you weren’t laughing at his monkey impression, you’re just not human). But it was Gabe (Zach Woods) that was the surprise of the night. Too often, his character has been victimized by being the straight man/victim without benefit of many punchlines. But not last night. Lines like “No one is a bigger fan of sexual touching” delivered in that repressed robot mannerism of his seemed to finally break his character through to a new level.

On top of all the groping, 7.15 also had a lot of Valentine’s charm. Whether it was Pam (Jenna Fischer) and Jim (John Krasinski) awkwardly searching for their first office bang (and wouldn’t you want to as well, if you found out even Creed had done it!), or Andy’s (Ed Helms) painful assistance on Erin’s (Ellie Kemper) treasure hunt, each couple fumbled their way through the forced expectations of the big day. And we could finally relate to a Michael meltdown, even if he couldn’t see how simple the answers to the potential future loss of Holly were.

Valentine’s Day episodes of any sitcom come with their own set of lofty expectations that are difficult to pull off from year to year. But as soon as we learned that Michael could put his legs above his head, I knew this year’s installment wouldn’t disappoint.