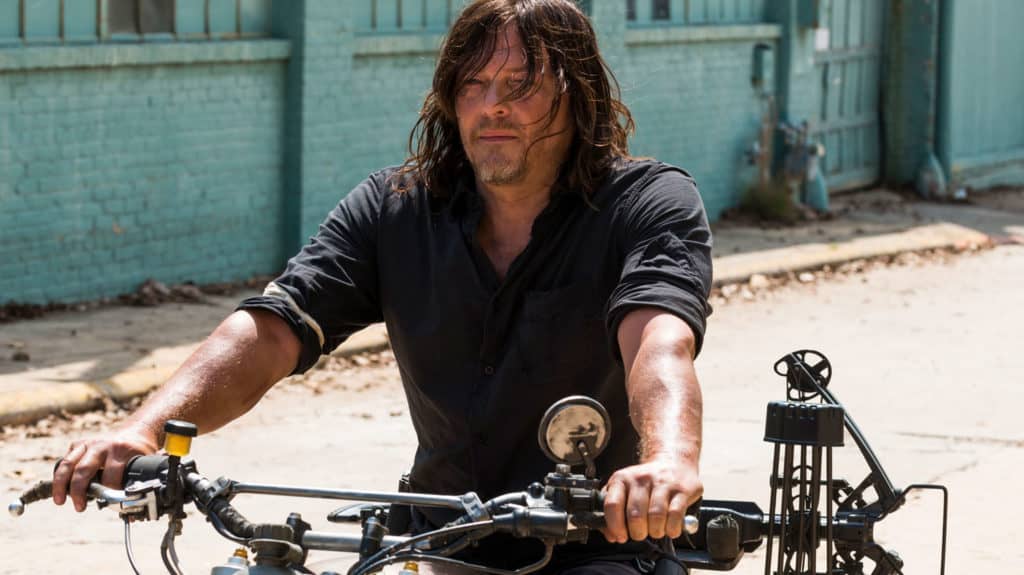 How many people recall a moment in The Boondock Saints II when Norman Reedus, as Murphy, mentioned that he’d like to dye his hair lighter? His on-screen brother, Connor, played by Sean Patrick Flannery, gave him hell when he guessed that Murphy wanted to dye his hair blond, but a number of fans picked up on the idea that maybe Murphy wanted to look more like his brother, who he idolized. Of course, that’s just a theory, but how funny would it be if he did get the part of Johnny Blaze and dyed his hair blonde anyway? I know that’s a bit of a leap from one movie idea to another since even Nicolas Cage didn’t dye his hair blond for his turn as Johnny Blaze. But it’s a thought since there are apparently rumors that Reedus is in talks to become the next Ghost Rider, which actually sounds like a fun idea given that he might fit the role just fine. One thing that Johnny Blaze has never really been as is chipper when it comes to how he interacts with people in the comics, and this would suit Reedus just fine.

But speaking honestly, the representations we’ve seen of Ghost Rider at this point, both in the movies and in Agents of SHIELD, feel like they’ve missed the mark on the character in a few ways, even if they weren’t so godawful that watching them became a laugh riot. A lot of people might state that they enjoyed the movies, or some might say that his best appearance was on the TV show, but the point is that Ghost Rider is a well-respected Marvel character, and he’s someone that a lot of people would love to see again. Why we haven’t seen Ghost Rider appear in the MCU yet is kind of confusing since there have been plenty of moments when he might actually be a great character to bring in.

There have been a few other people that fans have expressed interest in when it comes to filling in for the Ghost Rider, but this is why he’s such a tricky character to cast since there are a few individuals that could make it work, but there are only so many that would turn the role into something that would be absolutely memorable. So far, a lot of people have forgotten a great deal of the Ghost Rider movies and have left the character behind in favor of others. But seeing as how the multiverse is now in play and magic has become a big deal in the MCU, it’s fair to say that it’s time to start bringing in other characters that are magical in nature and capable of raising the bar just a bit. The Ghost Rider does have his share of enemies and he does interact with other enemies that have belonged to other heroes for many years, so there’s no shortage of stuff for him to do. On top of that, he’s even clashed with a few heavy hitters in the hero department, so it might be nice to see a movie that could feature another hero or two and a couple of impressive villains that might elevate his story just a bit.

But as far as bringing in Reedus goes it does sound interesting enough to make it happen since it could be that a new face and a new kind of attitude could turn this character around. Maybe it could even happen that this version of Ghost Rider could go back to riding his motorcycle instead of a car. Some fans have a preference, but the fact is that the character that a lot of people knew and still know came in riding a motorcycle and it would be great to get back to that image before moving on to something else. But apart from that, watching Reedus go through the transformation could be something different than what’s been seen already, or it could just be another version of what’s already come before. Bringing the character back is the main point since the Ghost Rider is a lot more intriguing than a lot of people might realize, especially given his backstory, what he can do, and who he has to deal with on a regular basis.  This could be the best way to bring in Mephisto finally since Johnny Blaze had to sell his soul to Mephisto at one point, which is how he became the Rider in the first place. While we’ve seen this story play out already, it could still be something that fans might get excited about since with everything else that’s happening in the MCU, this would be one more entry that people might find is absolutely necessary. Reedus has the talent and the attitude, so maybe it’s time to give him a shot.

Cobra Kai Season 4 Only Gets Better

Why The Knights of Ren Need a Spinoff

The Top Five Streaming Movies Of 2021

Who Is Dr. Joya from “Pop Goes the Vet with Dr. Joya”?