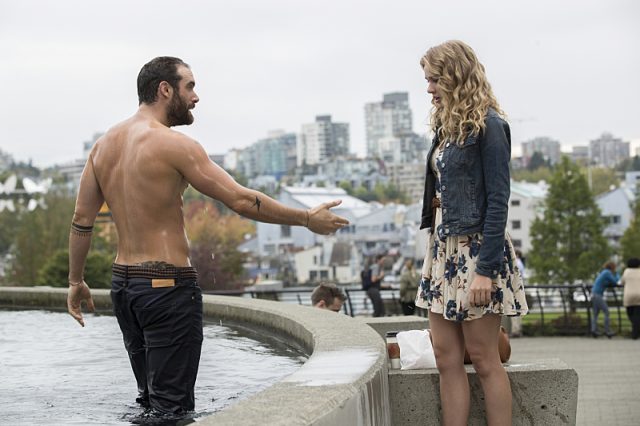 After last week’s incredible episode of No Tomorrow, which I still firmly believe is the series’ best hour yet, I thought that the show had reached a new level of excellence and consistency. There was an energy and romance to “No Doubt” that helped make No Tomorrow feel like nothing else on television, and I got swept up in it all, in the sense of optimism and hope that the series continues to champion and in the chemistry and connection between its two main characters, Evie and Xavier. In last week’s episode, it felt like the two of them had deepened their relationship in a very real and honest way, and it seemed that, at least for the time being, they were both fully committed to each other.

With all that being said, you can understand my disappointment with tonight’s No Tomorrow, titled “No Holds Barred,” which feels like a major bit of character regression for both Evie and Xavier. After strengthening their bond in last week’s hour, the two of them quickly find themselves at a distance from one another in “No Hold Barred” after Evie walks in on Xavier spending time with Tuesday (Jenna Dewan Tatum), a woman he used to sleep with before he began dating Evie and someone that he wants to be able to sleep with again since he suddenly tells Evie that he doesn’t believe in monogamy anymore. With eight months left until the world ends, Xavier wants to be free to experience anything and everything he can with anyone and everyone he can experience it with, and he wants the same for Evie, which is why he says that both of them should see other people while they continue dating.

In theory, this storyline isn’t a bad idea. It’s completely plausible that this type of lifestyle would be appealing to Xavier at first, and there’s a way that this story could have been told that makes the reveal near the end of the episode (that Xavier didn’t sleep with Tuesday and wants to exclusively be with Evie) genuinely touching. Unfortunately, following the events of “No Doubt,” nothing about this storyline works, as it feels more like Xavier and Evie falling into bad habits rather than growing with each other. Not to mention, their actions in tonight’s episode completely undercut and contradict what they did the week before; while their relationship is new and strange and different, we’ve seen Evie dive fully into it, especially with her acceptance of Xavier’s flaws last week, which was shown through her embracing his apocalypse theory enough to print out flyers and throw them out to the people on the street.

Ultimately, Xavier’s statements about non-monogamous relationships and wanting to sleep with other people (or even have a threesome) feel out of line with the character we’ve gotten to know over the past few episodes. He saw a kindness and warmth in Evie that day at the farmers market that made him want to seek her out, that made him want to spend his final days on Earth with her; why would he suddenly compromise that just for the opportunity to have sex with other people? It doesn’t make a lot of sense, and while I totally want Xavier to have flaws (he can’t always be a ray of sunshine and positivity–he should be a real person just like everyone else), I’d rather his issues feel authentic and in line with who he is as a person rather than some type of contrived drama manufactured to cause conflict between him and Evie.

Similarly, Evie embracing her “party girl” side and acknowledging near the end of the episode that she wants an open relationship feels less like a real decision from her rather than a reaction to Xavier’s initial actions. The first episode of No Tomorrow made a big deal about Evie seizing the day at her own pace, making her own choices and taking action only when she really believed in what she was doing. However, none of the decisions she makes in “No Holds Barred,” aside from knocking down the box wall at the end of the hour, feel like they’re her own, and when she tells Xavier that she wants to be non-monogamous, it feels more rushed than earned.

And it’s a shame that there’s so many problems with the Evie/Xavier storyline in this week’s No Tomorrow, because everything else in the episode is pretty much gold. Deirdre and Hank’s road to romance continues to be both hilarious and charming, as she shows her affection for him this week by constructing an American Samurai Soldier-like obstacle course that he uses to train. Plus, Deirdre’s voice still has quite the effect on Hank, and by episode’s end, he seems to enjoy it more than he fears it. I can’t wait to see what’s next for the two of them.

Also, watching Timothy break out of his shell in “No Holds Barred” (with a little help from Xavier, since both men didn’t know about the other’s involvement with Evie until the end of the episode) was an absolute blast, although I’m still not quite sure how he walked away from Tuesday and her friend in the hot tub (he’s a stronger man than most). Really, though, seeing Timothy’s confident side was a nice change of pace from his typically timid demeanor, and it was also a good reminder of the positive effect that Xavier can have on pretty much every person he meets. Xavier truly encourages everyone to be the best version of themselves, and let’s just hope that both he and Evie are back to being their best selves in next week’s episode.

What did everyone else think about this week’s episode of No Tomorrow? Were you as disappointed with it as I was? Comment below and let me know.

Xavier helps push Evie out of her comfort zone in a messy and lackluster episode of No Tomorrow.