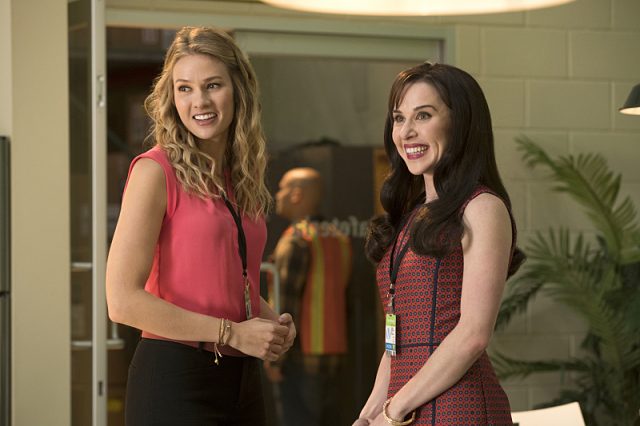 As human beings, we all make mistakes and sometimes end up hurting people accidentally. Maybe we said something we shouldn’t have said, or bailed too many times on a friend, or, in Evie’s case in this week’s episode of No Tomorrow, chose ourselves and what we wanted over our friendship with someone else. For Evie, it was joining the volleyball team during her sophomore year of high school and leaving her best friend, Fern, behind to try out alone for co-captain of the color guard, and even though it was one minor decision in Evie’s world, it greatly affected Fern for the rest of her life.

In “No Regrets,” No Tomorrow takes a story we’ve seen before, as Evie attempts to earn Fern’s forgiveness only to be undermined and attacked by her former, grudge-holding friend at every turn. However, unlike some recent shows and films that would turn Fern into a straight-up villain, making Evie’s betrayal in high school seem like nothing compared to the actions that Fern is now taking in the present, No Tomorrow finds the perfect balance. Sure, we feel for Evie as Fern befriends Deirdre and turns many of her co-workers against her, but we also understand the real pain that Fern went through during high school after Evie abandoned her and get why simple words aren’t enough to make up for that; action needs to be taken.

And really, “action needs to be taken” is, in some ways, the unofficial motto for No Tomorrow. Xavier’s presence in Evie’s life has helped turn her into a person that doesn’t just talk about her hopes and dreams but acts on them, and in his limited time with Evie’s friends and family, he’s also had a similar impact. While the possibility of the world ending has allowed Xavier and Evie to do some incredibly fun things, such as the shopping cart slingshot at the beginning of “No Regrets,” or building a blanket fort at the end of the episode, the most significant effect it has had on the two of them is inspiring them to say and do things that not only make themselves happier but also that bring some joy and solace to other people’s lives as well. Although Xavier helping Jesse escape from prison was a rather wild and outrageous example of this, Evie giving the CyberHugs position to Fern is a much more realistic and relatable situation, and it helps prove that Xavier’s lifestyle, which may seem somewhat selfish in theory, can actually produce quite selfless results.

While Evie finds a way to patch things up with Fern, Xavier spends most of “No Regrets” trying to distract himself from his feelings for Evie. At the end of last week’s episode, we saw that he wanted to be with her and only her, officially and exclusively, and in this week’s hour, Xavier struggles to find the right time to tell Evie the truth about his feelings and instead picks another goal off his apocalyst (returning a priceless baseball card to an old friend), which he thinks will be easy but actually turns out to be a much longer and more fulfilling journey for him.

From his and Evie’s trip to the museum, where he’s forced to French kiss the security guard while she switches out the baseball cards from the case, to his meeting with Violet Barnes, the lawyer-turned therapist daughter of his friend’s old cleaning lady, Xavier is not only constantly reminded of how powerful his feelings for Evie are but of why it’s right for him to be honest with her. All of it leads to the episode-ending scene in which he tells her how he really feels, while acknowledging that she still might want to date other people. “I don’t want every possible option,” Xavier tells Evie, the sounds of her dating apps beeping in the background. “I want you.”

And of course, Evie feels the same way; the two of them kiss before heading into the blanket fort he built for her. It’s a sweet, tender scene that doesn’t fully make up for last week’s out-of-character actions, but it works well within the context of this week’s episode. Plus, now that Evie and Xavier are finally on the same page when it comes to their relationship, I’m excited to see where they and No Tomorrow will go next.

Evie tries to make amends with her former best friend, Fern, in a strong episode of No Tomorrow.